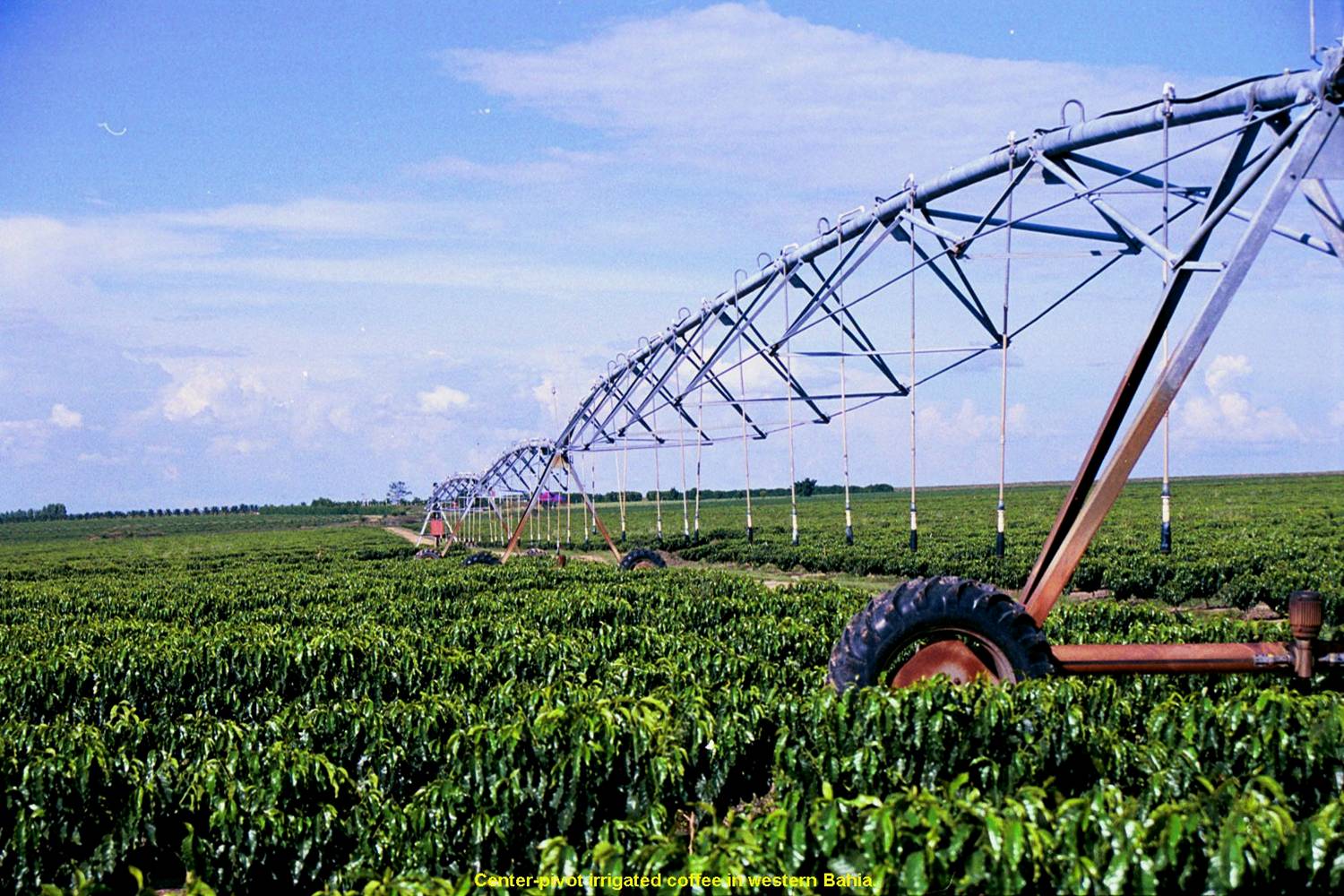 Post’s coffee export estimate for MY 2018/19 remains unchanged at 35.33 million bags, reaching near record levels despite ongoing limited container availability for shipments at the port.

Coffee growers requested the Brazilian government supply additional funds to support holding additional coffee stocks, in an attempt to avoid selling at current depressed prices, the result of higher volumes on the market.

Arabica production is estimated at 46.9 million bags, up five percent vis-a-vis the previous estimate, due to better than expected agricultural and de-husking yields in virtually all major Arabica growing areas in the country.

Post estimates robusta production in MY 2018/19 at 16.5 million bags, also a five percent increase compared to the previous estimate, due to better than initially anticipated yields in the states of Espirito Santo and Bahia.

The MY 2017/18 coffee crop estimate remains unchanged at 50.9 million 60-kg bags. The robusta and arabica harvests ended in August and September, respectively, in the majority of coffee growing areas.

Coffee traders report the bean and cup quality of the harvested product to be above average, except in select producing regions in eastern Minas Gerais, western São Paulo, and northwestern Parana. 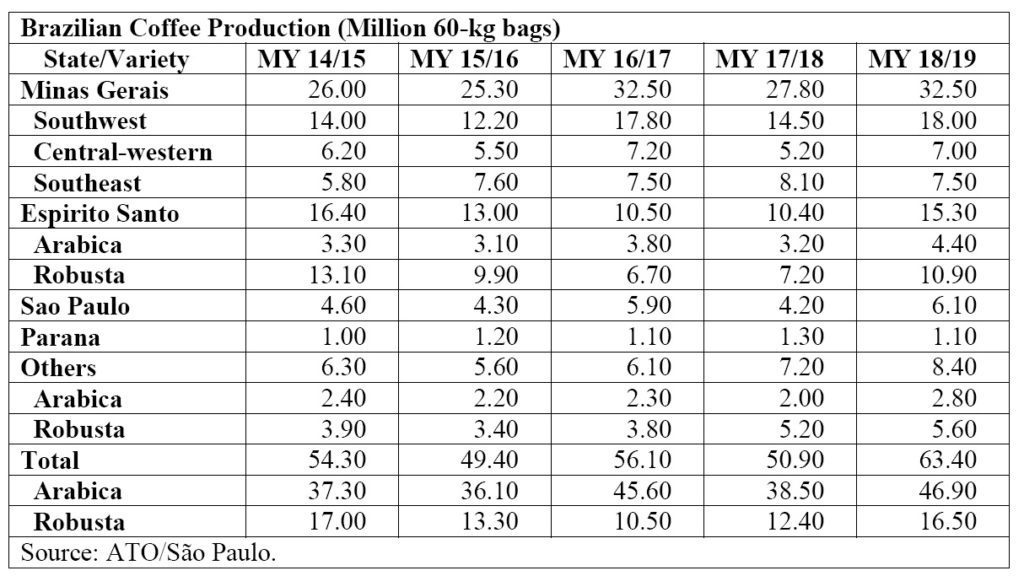 The Brazilian coffee yield for MY 2018/19 has been revised up to 30.78 bags/hectare, an increase of five percent from the previous estimate. 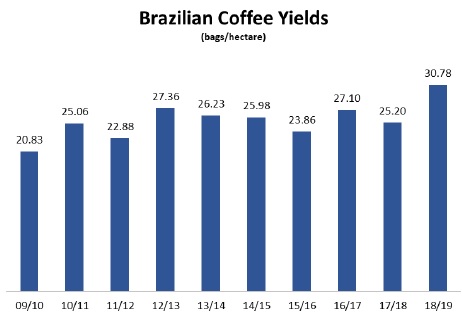 In September 2018, the Brazilian government (GOB), through the National Supply Company (CONAB) of the Ministry of Agriculture, Livestock and Supply (MAPA), released the third official coffee production estimate for MY 2018/19.

CONAB’s estimate is six percent lower than Post’s revised estimate. The September 2018 coffee production estimate for MY 2018/19 released by the Brazilian Institute of Geography and Statistics (IBGE) shows the production of 3.443 million metric tons of coffee, or 57.4 million 60-kg bags (43.1 million bags for arabica and 14.3 million for robusta coffee), up 24 percent relative to MY 2017/18 (46.7 million bags). IBGE estimates are six million 60-kg bags lower than Post’s revised estimate.

Both CONAB and IBGE use a different methodology to forecast coffee production than Post, and both are consistently lower than Post’s estimates.

No official forecast has been announced for MY 2019/20 production by CONAB or IBGE. However, Brazil is expected to produce a smaller crop next year due to the off-year of the biennial production cycle of coffee plants.

In addition, crop output is expected to be damaged by lower levels of investment in crop management, the result of depressed coffee prices and high input costs stemming from the depreciation of the Real (see sub-section Prices).

Given thin margins, producers are likely to decrease the application of fertilizers, pesticides, and herbicides, which in turn will negatively affect yields in the 2019/20 marketing year.

Coffee Prices on the Domestic Market

Average arabica coffee prices in the local currency, the Real, during the 2018 harvest (June-September) dropped six percent compared to last season, as a result of higher coffee output. However, prices in US$ dollars decreased significantly to US$ 111.40/bag in 2018, a reduction of 22 percent compared to the same period in 2017 (US$ 142.09/bag), due to the sharp change in the exchange rate during the same comparison period.

The price differential between both varieties has more than doubled from 2017 to 2018 due to the sharp recovery of robusta production in the current crop compared to tight supply in the previous seasons. The average price differential is R$ 108.72/bag for the April-September 2018 period compared to R$ 45.85 during the same period in 2017.

The Brazilian Coffee Industry Association (ABIC) reports that the likely increase in consumption is based on a research study conducted by Euromonitor, a market research consulting company.

The expected increased consumption should be supplied by the larger coffee harvest of the current crop. The Euromonitor study projects domestic consumption for calendar year 2021 at 25.6 million bags. ABIC has not yet released the November 2017-October 2018 coffee consumption survey.

The trucker strike of May and June 2018, in protest against the steady increase of diesel prices, paralyzed and/or reduced the transportation of several goods throughout Brazil. However, the strike did not have any impact on domestic consumption of coffee and did not present any significant logistical damage for the coffee industry, although it has resulted in increases of logistics costs.

According to the Brazilian Green Coffee Association (CECAFE) some exporters had to delay loading of coffee at ports because they could not find cargo space in container ships.

The institution estimates that September 2018 shipments could have been roughly 10-15 percent larger if more container space had been available.

Coffee exporters report that this has been an ongoing issue for the industry, given that the number of ship owners with access to the port has been consolidated lately, resulting in fewer shipping lines arriving at ports in Brazil and reducing the availability of containers for coffee exports.

CECAFE has already reached the National Agency for Waterway Transportation (ANTAQ), the Brazilian government body that oversees maritime transportation, to try and work out a solution for this issue.

Coffee exports for MY 2017/18 were revised slightly upward from 30.42 to 30.45 million 60-kg bags, green beans, to reflect updated information from the Brazilian Green Coffee Association (CECAFE).

Ending stocks for MY 2018/19 are estimated at 6.85 million bags, an increase of 4.9 million bags compared to the previous season, due to the larger coffee output for the current crop.

According to the National Coffee Council (CNC), an organization that represents coffee growers throughout Brazil, the National Monetary Fund (CMN) approved in March a total of R$1.862 billion to finance coffee stocks using the Coffee Economic Defense Fund (Funcafe).

To date, roughly 70 percent has been transferred to the sector. Earlier in October, the National Confederation of Agriculture (CNA), equivalent to the U.S. Farm Bureau, met with representatives from the Ministry of Agriculture, Livestock and Supply (MAPA) and Ministry of Treasury, to request additional funds from Funcafe to enable producers to hold additional coffee stocks with the hope of better prices in the future.

The large coffee volumes harvested during the current season have depressed coffee prices in the market. On March 31, CONAB released the 2018 private stocks survey, including stocks held by growers, coffee cooperatives, exporters, roasters, and the soluble industry.