FAS/Vietnam estimates Vietnam’s marketing year (MY) 2017/18 coffee production at 29.3 million bags, about 600,000 bags lower than the USDA estimate of 29.9 million bags, due to harvest losses caused by late rains.

The forecast for MY 2018/19 production is about 29.9 million bags, a 2 percent increase compared to MY 2017/18, due to favorable weather during the flowering stage.

Accordingly, FAS/Vietnam estimates bean export in MY 2017/18 to remain flat at about 25 million bags.

The forecast for MY 2018/19 bean exports is slightly up to 25.2 million bags, due to expected improved production.

Longer than normal rainfall in October and November 2017 made the initial harvest (the first 10 percent of the total harvest) of Vietnam’s MY 2017/18 Robusta coffee crop of inferior quality, as early ripening caused smaller beans and created some damage.

It also slowed the picking and drying processes, causing further physical damage to the beans.

The outstanding harvest, from December 2017 onward, was reported as being of good quality. Therefore, Post revised MY 2017/18 production down from about 28.6 million bags to 28 million bags, about a 2 percent drop compared to the USDA estimate.

Both of these factors will increase yields, and coupled with an expected increase in production area, FAS/Vietnam forecasts Robusta coffee production for MY 2018/19 to increase slightly to 28.5 million bags, an almost 2 percent increase over MY 2017/18.

Arabica production accounts for about 4 percent of Vietnam’s total coffee production, and about 6 percent of the total coffee area. Arabica trees produce good cherries at high elevation regions that are at least 1,000 meters above sea level.

In MY 2017/18, however, the production area shrunk from about 18,000 hectares (ha) to 16,000 ha, as farmers have been removing trees that are located below the appropriate elevation or are in areas that experience chronic water shortages.

Dien Bien – Son La, a province in the Northern highlands, on the other hand, has increased its production area from 16,000 ha to about 18,000 ha.

Both provinces have strong plans to increase production areas in the coming years. Therefore, FAS/Vietnam forecasts that, in MY 2018/19, Arabica production will continue to increase as planted area increases.

In the past 3 to 4 years, Vietnam went through a transformation to become the world’s leading producer and exporter of black pepper. Black pepper production is currently falling, and some farmers are planting horticultural crops, such as avocado, passion fruit, and durian, instead of coffee.

Nevertheless, many farmers still rely on coffee because it can be stored while farmers wait for better prices.

Industry sources also indicate that the price for nursery plants has risen about 30 to 40 percent in the past year, due to higher demand. As a result, nurseries are producing more trees.

The forecast for MY 2018/19 is about 2.6 million bags, due to the continuing proliferation of both international franchises and local Vietnamese coffee shops and cafes. FAS/Vietnam continues to see slow growth in the domestic coffee market due to extremely strong competition.

Many coffee shops and cafes are selling the same products, with little differentiation. Vietnamese coffee drinkers prefer roasted and ground coffee over soluble coffee. Instant coffee is consumed at very low levels, but is growing in popularity with western expatriates living in the large cities.

Overall, the total local consumption of coffee accounts for about 10 percent of total Vietnamese coffee production.

Exports In MY 2017/18, FAS/Vietnam estimates Vietnam’s total coffee exports, including green beans, roasted and ground, and instant coffee, at about 27.65 million bags, down from 28.15 million bags in the previous MY, mainly due to the smaller harvest.

For MY 2018/19, total exports are forecast at about 27.9 million bags, due to the predicted slightly larger harvest.

FAS/Vietnam estimates that Vietnam will export about 25 million bags of green coffee beans in MY 2017/18, about 500,000 bags less than the USDA estimate, due to the estimated smaller harvest of Robusta green beans.

Germany, the United States, and Italy remain the top three buyers of Vietnam green bean coffee, though exports to these major destinations are trending slightly downward in the first half of MY 2017/18.

Therefore, Vietnam has had to find other markets outside this core group, expanding its list of destination countries. However, FAS/Vietnam expects export volumes to these destinations to rise in the second half of the MY 2017/18.

MY 2018/19 green bean exports are forecast up to 25.2 million bags, due to slightly increased production.

Exports In MY 2017/18, FAS/Vietnam maintains exports of roasted coffee at 550,000 bags and exports of soluble at 2.1 million bags Green Bean Equivalent (GBE).

Vietnam continues to import small quantities of green coffee beans, as well as roasted and instant coffee from Laos, Indonesia, Brazil, and the United States.

Vietnam’s import of roasted/ground coffee from the United States has increased in the past few years due to the expanding coffee retail sector. U.S. brands such as Starbucks, McCafé, and Dunkin Donuts, and several South Korean coffee brands, have expanded their outlets widely in large cities and import roasted/ground coffee.

Total coffee imports in MY 2017/18 are expected to be up slightly from 1 million bags to 1.06 million GBE, due to the aforementioned expansion of international cafes and coffee shops. Of the total, about 160,000 bags GBE are soluble coffee, 400,000 bags GBE are roast and ground, and 500,000 bags are green bean imports.

FAS/Vietnam’s forecast for MY 2018/19 total coffee imports is 1.16 million bags. The jump is mainly due to the increased imports of roasted and ground coffee.

In the first 8 months of MY 2017/18, monthly export prices of common ungraded green bean Robusta (FOB HCMC) were at low levels. Prices averaged $1,800 per ton in October 2017, then continuously fell to their lowest level in the past five years by May 2018. Vietnam’s export prices are heavily impacted by those in Brazil, and there has been a depreciation of the Brazilian real and reports of a good Conilon crop harvest.

However, it is expected that prices will rise during the last months of MY 2017/18, following the same trend as in MY 2015/16, since stocks of Vietnamese coffee are currently lower than normal.

Domestic prices for Robusta common ungraded coffee beans were at their highest in October 2017. However, they dropped quickly from October to their lowest levels in December. Local prices remained steady, but at low levels from December 2017 to April 2018; prices are below historical averages, but are still higher than in MY 2015/16. Local prices are expected to rebound due to lower than normal overall coffee stocks.

According to traders, in the first 6 months of MY 2017/18, overall coffee stocks were about 30 percent lower than in MY 2016/17. Available stocks will be very low in the second half of the marketing year, putting upward pressure on prices. 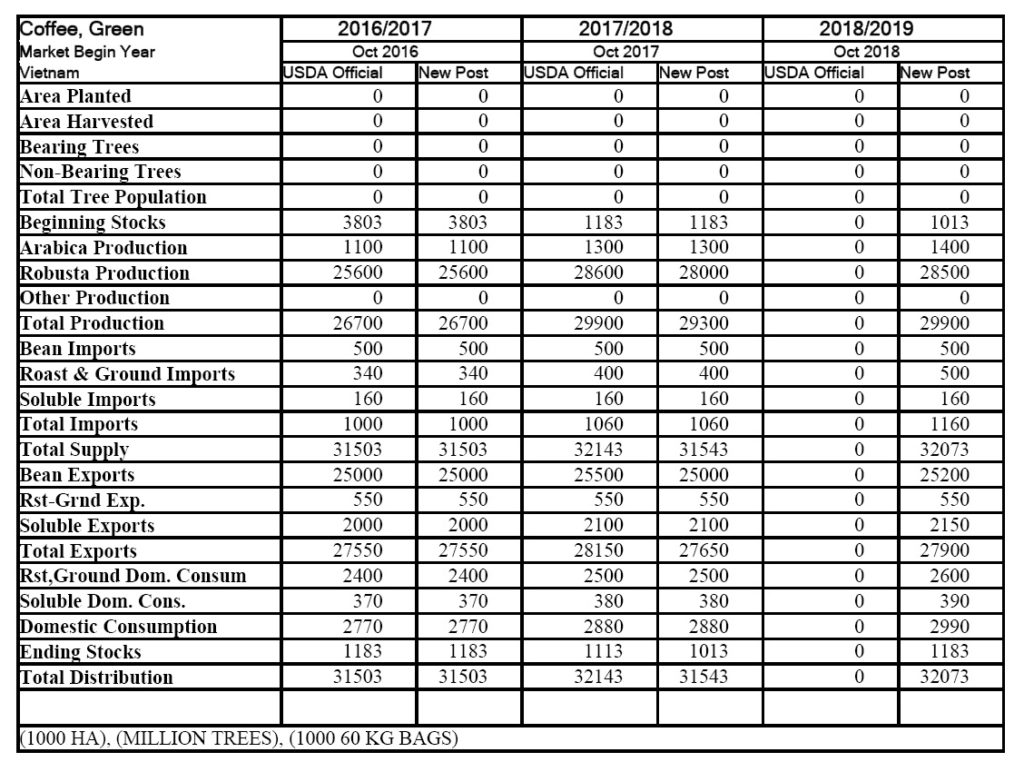