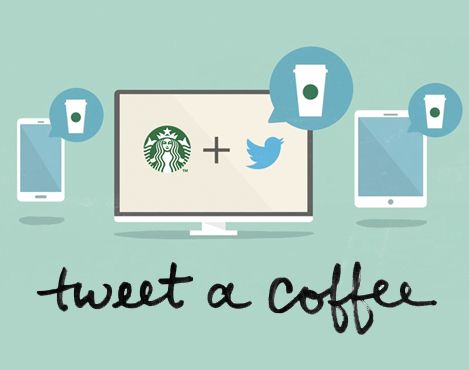 SEATTLE, WA– Starbucks today launched a new way for customers to send the thoughtful gift of Starbucks coffee through the tweet-a-coffee program. Customers in the U.S. can now simply sync their Starbucks account to their Twitter account and tweet to @tweetacoffee and the Twitter handle of the gift recipient, which will then send the recipient a $5 digital eGift.

Customers can them redeem the $5 Starbucks Card e-gift at participating Starbucks stores in the U.S., either by printing out the e-gift, showing it directly on their mobile device, or by loading it to their Starbucks mobile app.

Building upon Starbucks digital gifting and engagement offerings, tweet-a-coffee (launching today in beta form) will be an ongoing platform that will allow customers to engage with one another online to gift a Starbucks beverage spontaneously and respond proactively with gestures of encouragement, kindness on and “just because.”

Starbucks first launched its eGifting platform in 2011 on Starbucks.com and has extended that offering to Facebook, its iPhone mobile app and now through Twitter.

Starting today through Nov. 6, the first 100,000 customers who tweet a coffee using a Visa card will also receive a $5 Starbucks Card e-gift for themselves, courtesy of Visa and Starbucks.

“What’s so exciting about extending our eGifitng platform to Twitter is the open and real time nature of the platform.

Tweet-a-coffee allows us to do something quite different in eGifting in that people can now give the gift of Starbucks to anyone on Twitter in the moment.

This can be between the closest of friends, the most distant of colleagues, or even between people who have not even had the chance to meet yet in person, but have connected in some way on Twitter,” said Adam Brotman, chief digital officer, Starbucks.

“We love the possibilities that the Twitter community can unlock to share acts of kindness with one another. Tweet-a-coffee is a key next step as we innovate our social digital gifting offering.” “Starbucks is really breaking ground here,” said Joel Lunenfeld, vice president of brand strategy at Twitter.

“Shared experiences, such as a television show, a sporting event, or someone sharing a gift, are at the heart of the Twitter experience. It’s also central to what it means to be a modern brand.”

Customers in the U.S. can learn more about how to tweet-a-coffee at www.starbucks.com/tweetacoffee. To participate, customers will need to set up a Starbucks.com account and a Twitter account if they don’t already have one.