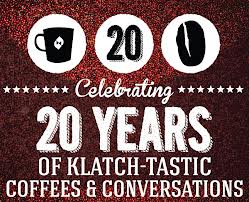 LOS ANGELES, CA – This month marks Klatch Coffees 20 year anniversary of coffee and conversation. Klatch Coffee is a family owned and operated specialty coffee company that credits its success to the quality of the coffee they source and their dedication to extensive training.

Klatch Coffee will celebrate their 20th anniversary by offering specials throughout the month of October at their retail locations and will cap it off October 19th at their roastery with Klatch Coffee-Con, an event that celebrates coffee in all its forms.

Klatch Coffee-Con is free and will run from 11 AM 3 PM. Everyone is invited to enjoy Klatch’s award winning and ground breaking drinks including espresso, nitro cold brew, geisha coffee, and cascara iced tea.

The day will also be filled with roasting demonstrations, brewing and latte art stations, and plenty of raffles and give-aways.

Klatch Coffee has earned plenty of awards over the years, including Americas Best Coffeehouse in 2012 and Micro-Roaster of the Year in 2009. They are also the home to two-time United States Barista Champion, Heather Perry.

While the awards speak for themselves, it is the Perry family that has ensured the company remained true to their goal to provide a relaxing atmosphere where their customers can enjoy the finest coffees and great conversations.