Glen Miller has developed a new heart-healthy coffee that, in the roasting process, infuses it with beneficial qualities of antioxidants found in red wine 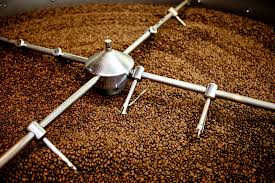 By Paul Briand
PORTSMOUTH (Us) – A new coffee created by a local organic chemist and marketed by a Portsmouth start-up incubator combines the perk-me-up qualities of java with the heart-healthy qualities of antioxidants found in red wine.
The product is CoffVee, Arabica beans infused during roasting with resveratrol, the naturally occurring antioxidant found in the skins of grapes used to make red wine.
It was created in a patented process by Glen Miller, an organic chemist who currently chairs the Chemistry Department at the University of New Hampshire in Durham, where he’s been for 20 years. Miller is working with the New England Innovation Center at 75 Congress St., Portsmouth, for its start-up know how to get the product into the market.

“We are thrilled to offer the widely accepted health benefits of red wine to consumers with each and every cup of CoffVee,” said Miller, who is founder, president and chief technical officer for the newly created Vera Roasting Company (www.veraroasting.com).
As an organic chemist, Miller said he thinks about compounds, what they do, and what they might potentially do in certain circumstances.

“But I’m also interested in entrepreneurial activities,” he said. “Vera extends from by training as an organic chemist.”

He developed the process of combining the roasted coffee beans with the resveratrol in his kitchen. The process, according to Miller, not only infuses the beans during roasting, but also provides the same amount of resveratrol in a cup of coffee as is in a glass of wine.

Infusing resveratrol into coffee in a form that promotes bio-absorption is a first for the coffee industry, according to the company.

“We think we’re on the verge of making the transformation of the coffee industry,” Miller said.

As part of his academic work, Miller said he has studied antioxidants, which he said are present as polyphenolic compounds in some of the healthiest foods on Earth, such as blueberries and kale.

There are hundreds, if not thousands, of studies, said Miller, which cite the health benefits of these antioxidants in the diet, such as combating diabetes, depression, Alzheimer’s disease and cancer.

Of particular note is what Miller called the “French Paradox” – people who eat a high-fat diet yet have low incidence of heart disease. The reason, said Miller, is their consumption of red wine with the benefits of the resveratrol.
Several of these studies are linked on the Vera Roasting website. “People can open them up and read them and reach their own conclusions,” he said.

And red wine has been around for a long time, providing a long lineage of human testing. “Other than water, it might be the oldest drink, or close to it,” Miller said.
Miller knew the benefits of resveratrol, which is tasteless, but he didn’t know at first how best to provide it in a beverage (other than wine). He said he thought about tea, and he considered bottled water. He perked up at the idea of coffee because, among adults, it is so common. Studies have also shown the health benefits of coffee drinking, according to Miller.
“Coffee is exactly the kind of drink you’d have in your hand driving to work or driving your kid to soccer,” he said.
He noted that 83 percent of all adults drink coffee, and the average coffee drinker consumes 3.1 cups per day. Coffee is a $40 billion a year industry, according to Miller.
“In the end, coffee was the best choice,” he said.

Miller had worked about five years ago on a different start-up idea with Mark Galvin, a founder and managing general partner of the New England Innovation Center.
At the time, Galvin headed up another innovation center – NH-ICC – with the purpose of helping UNH faculty members develop their research and intellectual property into marketable products. Miller had the idea of using organic semiconductor science to develop high-efficiency, low-energy lighting. The idea, according to Miller, is that you flip a light switch and the wallpaper becomes the source of light, not an overhead lightbulb or lamp.

“But I think we were a little ahead of our time,” he said. While he believes the idea is still sound, he couldn’t get the financial backing he needed to make a product on a marketable scale.

He said he brought the coffee idea to Galvin in the spring and pitched the idea to the New England Innovation Center group.

“The team immediately saw the wisdom of what he was doing and jumped on to do some initial business modeling and market analysis. We determined that if the intellectual property was protectable, it would meet all the criteria we use for selecting companies to work on at the NEIC,” said Galvin, who noted the center provides Vera Roasting with web and software development, along with sales, marketing and legal expertise.
The creation of the coffee itself – in medium and bold roasts, and in both bean and ground form – is contracted out to a coffee roaster. Miller hopes the company grows to the point where everything – roasting, packaging, shipping and administration – are located locally.
Galvin predicts Vera Roasting “is going to become a really big deal.”

Miller appreciates the help he’s getting from the innovation center.
“I realized this is a good marriage because I am not a business person,” Miller said.
Even though the company hadn’t officially launched until Dec. 8, the presence of the website and some early word of mouth led to a sell out of the first production run of a couple of hundred pounds of coffee.
Miller plans to pour himself into the business and maintain his teaching and administrative schedule at UNH.