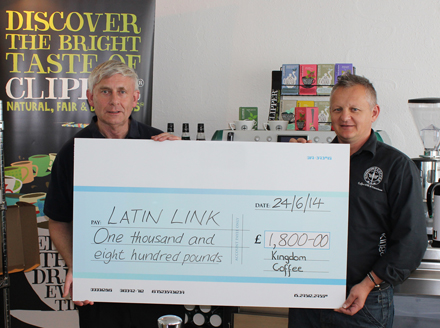 Reading-based charity Latin Link has just taken receipt of a cheque for £1,800 from Kingdom Coffee, the Fairtrade and Ethical coffee and tea supplier also based in Reading.

The cheque represented donations made by visitors to the Kingdom Coffee stand at the recent Christian Resources Exhibition (CRE) at Sandown Park, Esher – which Kingdom Coffee then doubled – plus donations from the Pura-Vida Fairtrade Plus coffee range. The money will help Latin Link projects in Colombia and Costa Rica.

The two Latin Link projects to benefit from the donations are Vive Kids and the Los Guido Community Project. Vive Kids works in places affected by violence and extreme poverty on the northern coast of Colombia, training children’s club leaders to run clubs for the children in their communities.

The Los Guido project is involved in community development, including English teaching, among the poor and needy in Los Guido shanty town on the edge of San José, Costa Rica.

Jonathan Leeson, Latin Link’s Area Representative for the South of England, received the cheque on the charity’s behalf.

Jonathan manned the stand at CRE on all four days. He said: ‘It’s a privilege to work on the Kingdom Coffee stand, as you get so many opportunities to engage people in conversations. You also get to hand out cups of delicious coffee, which always brings a smile to people’s faces.’

Darren Rayner, handing over the cheque on behalf of Kingdom Coffee, commented: ‘Our partnership with Latin Link goes from strength to strength.

It is tremendous to be able to make this donation, knowing that the money is going to projects that are making a real difference in the lives of Latin American individuals and families and the communities in which they live.’

Latin Link is one of three Christian charities that partners with Kingdom Coffee via its Pura-Vida Fairtrade Plus coffee promotion.

Through this, customers purchase 2.5kg of filter coffee for £39.50 and nominate their charity (from a choice of three, of which Latin Link is one). Kingdom Coffee then donates £5 from the sale price to that charity.

Latin Link is an international charity with a passion for Latin America. Their members work with local churches, organisations and communities to help them meet the needs around them. Find out more at www. latinlink.org.uk.

Kingdom Coffee is a wholesale trading company supplying fairly and ethically traded coffee, tea and associated products to churches and businesses. To find out more about Pura-Vida filter coffee and Kingdom Coffee’s many other products, visit www.kingdomcoffee.co.uk.