The restoration of Moriondo, the earliest espresso machine for bars in history 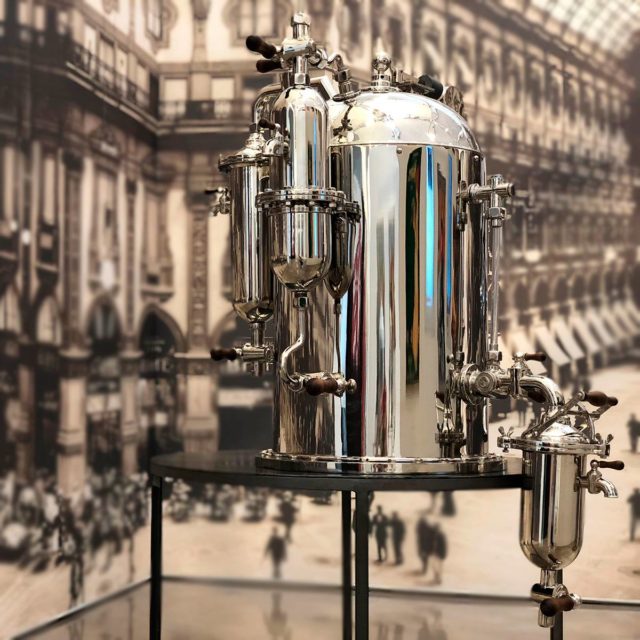 MILAN, Italy — Moriondo the first espresso machine for bars was created during the momentous period of transformation that marked the Second Industrial Revolution. On 30th June 1884, Turin-born Angelo Moriondo registered not only a patent, but also a whole new way of tasting coffee, which was turned from an infusion into espresso.

“New steam devices for cheaply and instantly turning coffee into a drink”: this was the slogan of a machine that boasted undeniably modern elements, as well as rapid delivery. The cylindrical device featured a boiler with water level and steam pressure indications, as well as a safety valve and a quick-mount handle. It could rapidly produce one or more cups of coffee “in the presence of the public”.

Truly revolutionary. Unfortunately, Moriondo only built a few prototypes of the machines, which were exclusively used for his Turin bars, condemning the ingenious invention to oblivion for years. If you want to see this model you can find it at the Mumac Museum and Lavazza Museum.

Both machines were restored by Enrico Maltoni, the biggest professional coffee machines collector in the world.

Maltoni went through a thorough historical research to restore the original models.

It also marked the date on which a completely new way of tasting coffee commenced, which was different to that which had been fashionable for centuries and had used traditional coffee makers for dispensing the infusion into the cup.

By registering the patent, Moriondo certified the design of an innovative model of steam machine, which improved coffee extraction.

The document registered was entitled “New steam appliances for producing coffee drinks both cheaply and instantly, A. Moriondo system”, wording which clearly states the main innovations of the apparatus, namely the use of steam and the fact it dispensed the drink immediately.

The machine devised by Moriondo featured undeniably modern elements. The cylindrically shaped apparatus featured a boiler with instructions concerning water levels and steam pressure, had a safety valve, a portafilter handle with quick fix connection and could produce one or more cups of coffee in just a few minutes.

Moriondo, owner of a number of coffee bars at the time, had several of these models made so they could be used in the businesses he owned.

The machines were built in view of the upcoming Esposizione Generale in the Valentino (1884), an event which attracted hundreds of people to Turin.

A model of this revolutionary device was displayed in one of the pavilions of the abovementioned international exhibition (which was in truth just an ordinary kiosk where visitors stopped to rest), attaining an important award, the bronze medal, as well as catching the attention of the press.

Curiously, Moriondo never used the patent for industrial production nor for mass selling. He simply produced a few prototypes of the machines to be used exclusively in the coffee bars he owned, a choice which condemned the name of the ingenious inventor to historiographical oblivion: the machines were not sold to a widespread public and Moriondo’s biography was ignored for many years by coffee historians.

Angelo Moriondo’s technological innovation is part of the climate of renewal of the period brought on by the Second Industrial Revolution. This historical period saddled the 19th and 20th centuries and was characterised by great changes which led to the development of mass society.

This period of modernisation which mainly involved Europe, the United States, Russia and Japan is marked by the arrival on the scene of new social classes, i.e. the proletariat and the bourgeoisie, by intense industrialisation, the development of new political ideas (socialist and liberal theories and nationalism) and ultimately by the inevitable metamorphosis of social customs.

The introduction of electric light, rail transport and the cinema are examples of this transformation process which would also have negative aspects, too, such as colonial domination and the rise of racism.

The exaltation of technology and science, considered as means which were able to solve any kind of problem related to civil life is intrinsically linked to the idea of progress.

Art Nouveau established itself within the cultural sphere, a refined artistic and philosophical movement which proposed aesthetics formed of curved lines and ornamental plant-like motifs.

This took on the name Liberty in Italy, from the name of the London store founded in 1875 by A. Lasenby Liberty, that specialised in the sale of products from the Far East.

For a small minority of the population (the more affluent social strata) this period, not surprisingly renamed the Belle Époque, would be marked by an elegant, carefree lifestyle that would end abruptly in 1914 with the outbreak of the Great War (1914-1918).

Thanks to the inventiveness of a pioneer called Luigi Bezzera, at the beginning of the 20th century the very first puffing steam machines would appear in coffee bars. These permanently replaced the old coffee makers a change that was, in some ways, revolutionary.

This video shows the restoration process