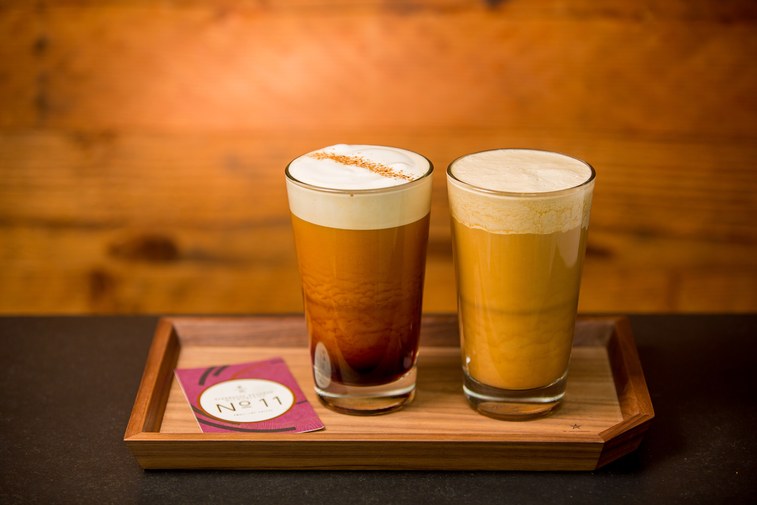 SEATTLE, U.S. – As most Starbucks fans probably know, the coffee chain has been focusing on expanding its high-end Reserve brand as of late. The first-ever Reserve Roastery and Tasting Room has been going strong in Seattle since December 2014.

The first drink is the Starbucks Nitro Cascara Cloud, which is made by slowly steeping nitrogen-infused Starbucks Reserve Cold Brew and pouring it over vanilla bean syrup.

The beverage is then topped with a cold foam made of milk and cascara syrup, as well as cascara sugar. (Cascara is the dried fruit of coffee cherries.) Starbucks describes the beverage’s flavor as rich and dark chocolaty, with a hint of berry.

“We love the Cascara Latte, and wanted to embrace that with Nitro,” said Sara Bennett from the Starbucks beverage R&D team in a press release. “We love the idea of using cascara — part of the coffee plant — to add flavor to coffee. Cascara elevates the flavor of every coffee it meets.”

The second beverage is the Starbucks Nitro Dirty Chai. It’s made by blending chai with cream, then topping things off with Starbucks Reserve Nitro Cold Brew, resulting in a creamy texture covered with chai foam.

“Coffee and tea combine beautifully in this beverage. The warm spice flavors of the chai play well with the port-like notes of the Nitro Cold Brew,” Bennett said.

Both beverages are available on draft with or without nitrogen infusion, and they will be available starting Tuesday, July 11, at select Starbucks Reserve bars in the U.S. and Canada.