MILAN – Starbucks has reopened most of its cafes in China, weeks after the coffee chain shut nearly half of its over 4,000 stores in the world’s second-largest economy due to the Coronavirus outbreak. Starbucks Corp. Chief Executive Kevin Johnson tweeted an update on Thursday along with a clip, saying that 85% of the company’s locations in the country are back up and running.

“This video from Belinda Wong, Starbucks China, was taken at the Shanghai Roastery, where our partners are full of joy to be back behind the bar serving customers,” he wrote.

“This past month has been a very difficult period for our country, our Starbucks partners and their families,” Wong said in the social media video. “At the peak [of coronavirus], we had closed more than half of our stores.

But that was necessary to protect the safety of our partners and customers. We want to make sure to do our part to not spread the virus in this country.” 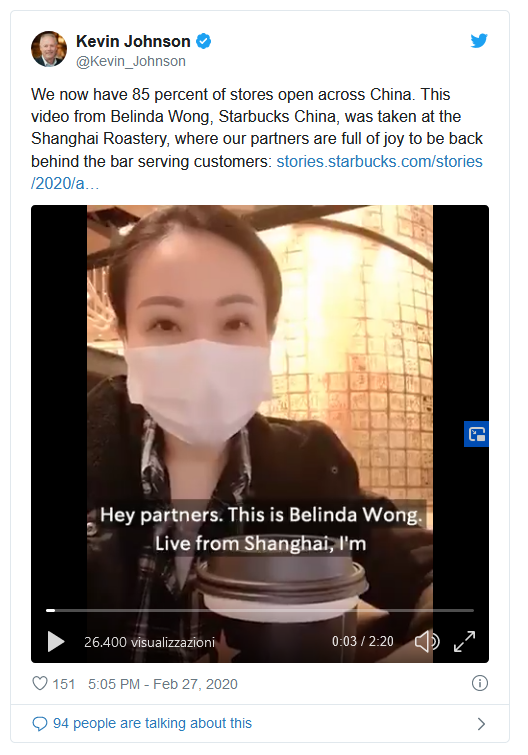 “With the number of new cases in China slowing, we are seeing the early signs of a recovery in the region,” Johnson wrote in a letter to employees on Thursday.

The company did not share any updates on the expected financial impact of the temporary closures. Starbucks said in late January that it expects that the virus will “materially affect” its results for the fiscal second quarter and fiscal 2020. China accounted for 10% of Starbucks’ revenue during its first quarter.

Starbucks stock has dropped 11% over the past month, but shares have rallied 12.6% over the last year.

The epidemic, which has claimed nearly 2,800 lives, infected nearly 80,000 people and spread to 44 countries so far, has forced retailers and restaurants in China to shutter stores and warn of a hit to their earnings earlier in the year.

Chinese authorities said the number of new deaths stood at 29 on Thursday, its lowest daily tally since Jan. 28.