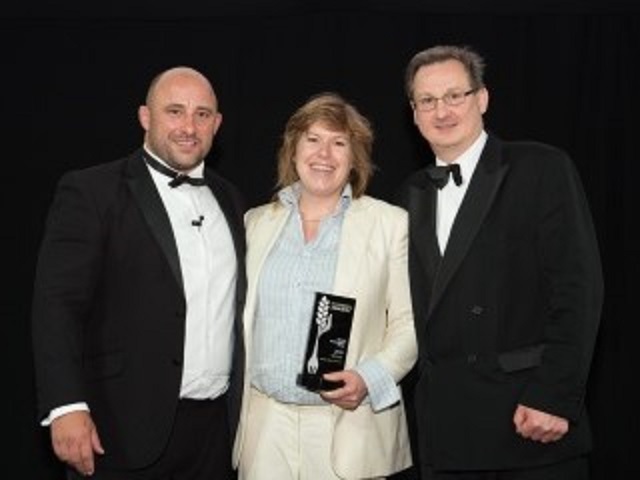 Chef, food writer, broadcaster and Fairtrade Patron, Allegra McEvedy MBE has won the Special Achievement Award at the Footprint Awards 2015, an annual event that celebrates companies and individuals that lead the way on sustainability in the foodservice and hospitality sector.

Allegra was recognised for her exemplary commitment to ethical sourcing, including her work to champion and promote Fairtrade. Described by The Independent as “a caterer with a conscience”, Allegra has been cooking professionally for over 20 years.

Allegra has been an active supporter of Fairtrade since 2008, when she visited tea and nut producers in Malawi.

As Patron of the Fairtrade Foundation since 2012, she has played an important role in raising public awareness of the difference that Fairtrade makes to farmers and workers in developing countries, and supported numerous campaigns including Make Bananas Fair, for which she travelled to the Windward Islands to meet Fairtrade banana farmers.

In addition to her work with Fairtrade, Allegra has worked with Oxford Brookes University to introduce healthy, nutritious meals, is a spokesperson for Compassion in World Farming, and Patron of The Food Chain, a charity that delivers hot meals to people with HIV and AIDS.

In 2008, Allegra was awarded an MBE for her work to promote healthier eating and ethical sourcing in the UK.

Other Footprint Award 2015 winners included Tate & Lyle Sugars, which won the Social Impact and Diversity Award for the difference it has made to the lives of small scale sugar cane farmers and their communities in developing countries.