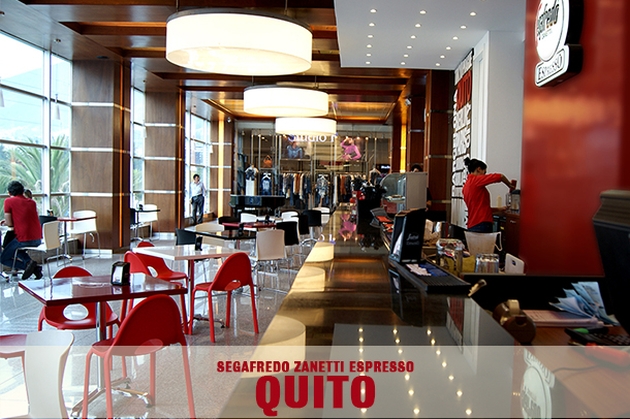 Segafredo Zanetti Espresso has recently opened a café in Quito, the Middle of the World.

Quito, the capital of Ecuador, is one of the most beautiful cities in South America. Situated in the equator, and at an elevation of 2,800 meters above sea level, this city was the first one to be declared World Cultural Heritage sites by UNESCO in 1978.

Quito has app. 2,6 million inhabitants and is the highest official capital city in the world.

This new Segafredo Espresso Café is located in Quicentro Shopping Mall, the most exclusive Shopping Centre in the city.

The mall is situated in the commercial and financial area of the city, next to the emblematic Atahualpa Olympic Stadium, home of the Ecuadorian national football team.

The Segafredo Espresso Café is located in the high end area of the mall, has an 11 meter long bar and is facing the beautiful financial district of Quito.

A wide range of Italian cuisine, cocktails and also the superior quality of the espresso coffee, make this new place in town a must-visit. Among the popular dishes are the Panini, fresh Pasta, Pizza and Salads. Italian Gelato, desserts and pastries are also great offers.

The franchise partner is MEGAN S.A. which is a well-known company in the restaurant business. They operate multiple sport bars and restaurants in Ecuador.

The near future plans of the company is to open other Segafredo Espresso Cafes in Quito as well as in Guayaquil.