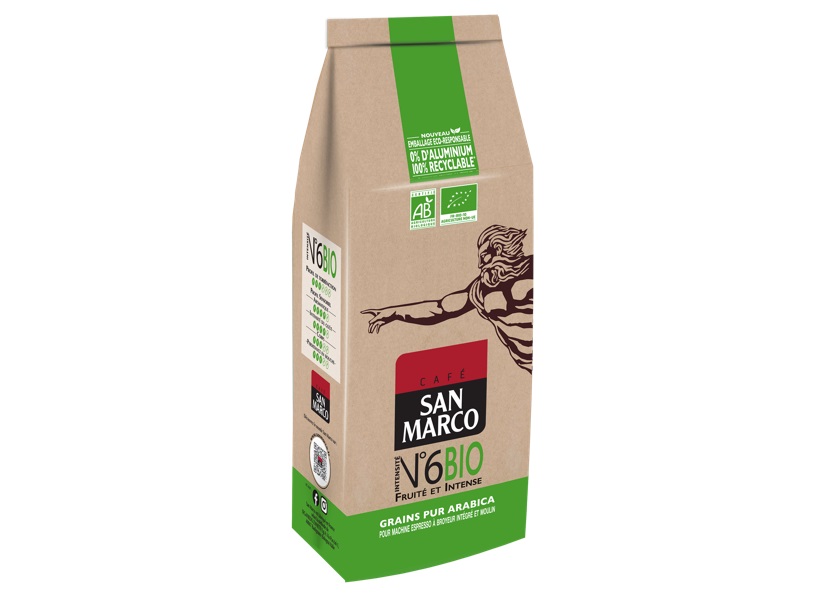 MILAN – From the bistro to the home, Segafredo Zanetti, a major player in Italian espresso, has been committed for several years to helping coffee lovers to consume better and more fairly. In France, it was the first brand in its sector to launch compostable capsules in supermarkets. Last year, it announced that all its new products would now be organic. Today, it is further consolidating its pioneering status for the benefit of the planet and people, with the launch of the very first 100% recyclable and aluminum-free coffee packaging. It will be used initially for its organic references Intermezzo and San Marco.

Segafredo Zanetti’s new packaging is the first in the world of coffee to be entirely eco-designed. Made from polyethylene, a 100% recyclable material, it contains 0% aluminium. Once collected and sorted, which will be possible everywhere in France from 2022, it can be recycled and reused: good news for the planet! Thus, crushed, then transformed into granules, or even colored, it becomes a raw material again, being used in the manufacture of products such as garbage bags or street furniture. It also proves to be an excellent insulator, even in humid environments, and has a chemical inertia that makes it compatible with foodstuffs such as coffee.

This thermoplastic resin is one of the most widely used in the world. Therefore, Segafredo Zanetti’s innovation does not really lie in its use, but in the brand’s ability to integrate it into its industrial process. It took two years to adapt its production lines to the use of this material. They had to be modified to allow the handling, driving, folding and welding of the polyethylene sheets to form the new packs: a real industrial feat!

The new approach of a group in the vanguard of CSR

This new initiative is part of the more global CSR approach led by Segafredo Zanetti and formalized in 2016 with the signing of the United Nations Global Compact as part of the Global Impact initiative: a renewed commitment in 2020. This environmental policy has been recognized and praised by Ecovadis, which ranked Segafredo in its TOP 1% of the most committed and successful companies in terms of CSR.

With its new packaging, the Italian brand also anticipates French government requirements, which aim for 100% recycled plastic and household waste by 2025. Its launch in our country is particularly relevant since France has one of the most active polyethylene recycling channels in Europe and is accelerating further to meet the government’s ambitious targets.

Its polyethylene pack will initially package the references Intermezzo Bio in 500g granules and San Marco Bio – ground (250g), 500g granules and pods -. By 2022, 80% of Segafredo’s ranges will benefit from this new packaging.