ABIDJAN, Côte d’Ivoire – The report on the movements of cocoa futures prices for the month under review highlights the September-2021 (SEP-21) and December-2021 (DEC-21) futures contracts as listed on ICE Futures Europe (London) and ICE Futures U.S. (New York). It aims to provide insights on the price developments for these two specific futures contracts.

Figure 1 shows price movements on the London and New York futures markets respectively at the London closing time in August 2021, while Figure 2 presents similar information for the previous year.

As presented in Figure 1, the SEP-21 contract was cheaper compared to the deferred one (DEC-21) on both the London and New York markets during August 2021. This situation expresses that, there was no anticipation of a supply bottleneck that could trigger market tension over the deliveries against the last futures contract of the 2020/21 cocoa year. 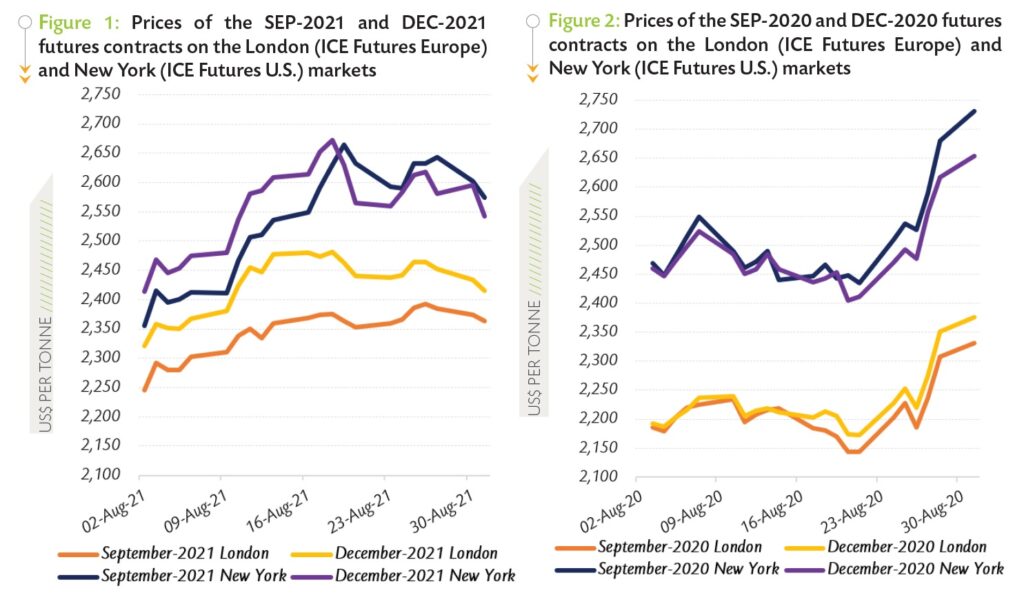 Figure 2 illustrates that the London market was in contango whilst New York was in backwardation in August 2020. At the time, certified stocks with valid certificates represented 64% of the total stocks held in exchange licensed warehouses in Europe whilst in the United States, the share of certified stocks in total stocks in exchange licensed warehouses was very low (4%).

Focusing on the developments of the SEP-21 futures contract prices, two distinct sequences emerge. Indeed, a bullish stance was observed during the first nineteen days of the month, while a virtually flat trend was seen over the last ten days of the month under review. Over 02-19 August, the upward trend seen in the prices of the SEP-21 contract was triggered by various fundamental factors.

On the one hand, the main cocoa growing areas of Côte d’Ivoire and Ghana were reported to have witnessed less conducive meteorological conditions (i.e. below normal rainfall; which is detrimental to soil moisture and thereby harmful for cocoa yields).

On the other hand, signs of improvement in the demand for chocolate and cocoa in conjunction with the announcement of the Côte d’Ivoire government to stop the sales of exports licenses for the 2021/22 cocoa season contributed to fuelling the price rallies. In London, prices of the SEP-21 futures contract were bolstered by 5% from US$2,245 to US$2,364 per tonne while in New York they climbed by 13% from US$2,355 to US$2,664 per tonne.

At the time, robust supplies and continuously higher purchases were recorded in Côte d’Ivoire and Ghana respectively. In addition, the global cocoa market was bracing itself for a larger supply surplus for the 2020/21 cocoa season.

Figure 3 presents the net short positions for commercial traders in Europe over the period 2018/19 – 2020/21, while Figure 4 portrays the same information in the United States. The weekly report on the Commitments of Traders is the information source. The size of net short positions can be thought of as a demand for “insurance” against price drops; and, its change over time assesses the evolution of the risk perception of the entire spectrum of merchants and producers in the cocoa futures markets. 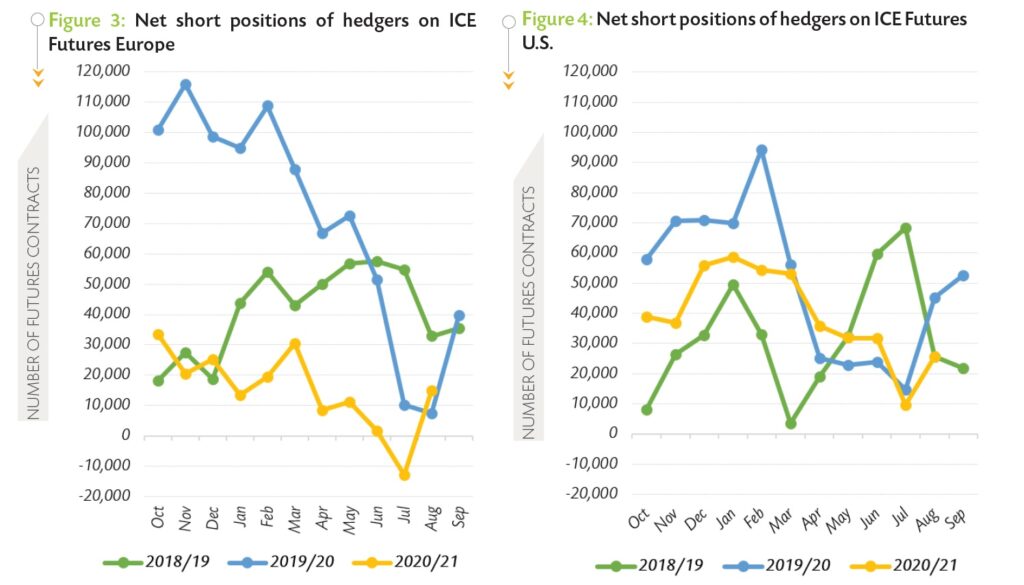 Over October 2020 to August 2021, the average net short positions in both Europe and the United States were generally lower than recorded over the same period in 2019/20. In New York, they declined by 22% from an average of 58,449 contracts to 45,624 contracts.

Concurrently, in London, they were down by 80% from an average of 74,146 contracts to 15,128 contracts compared to 2019/20 (Figure 3 and Figure 4). The COVID 19 pandemic reducing the risk perception of a bearish market has in turn reduced the need for “insurance”.

In August, stocks of cocoa beans with valid certificates in European warehouses averaged 140,436 tonnes, representing 82% of the total stocks. As shown in Figure 5, stocks with valid certificates increased by 26% as compared to their average level of 111,025 tonnes seen a year ago. In the United States, total stocks spiked by 45% year-on-year to reach an average of 365,461 tonnes in August 2021 (Figure 6) while certified stocks jumped from 9,859 tonnes to 44,659 tonnes. 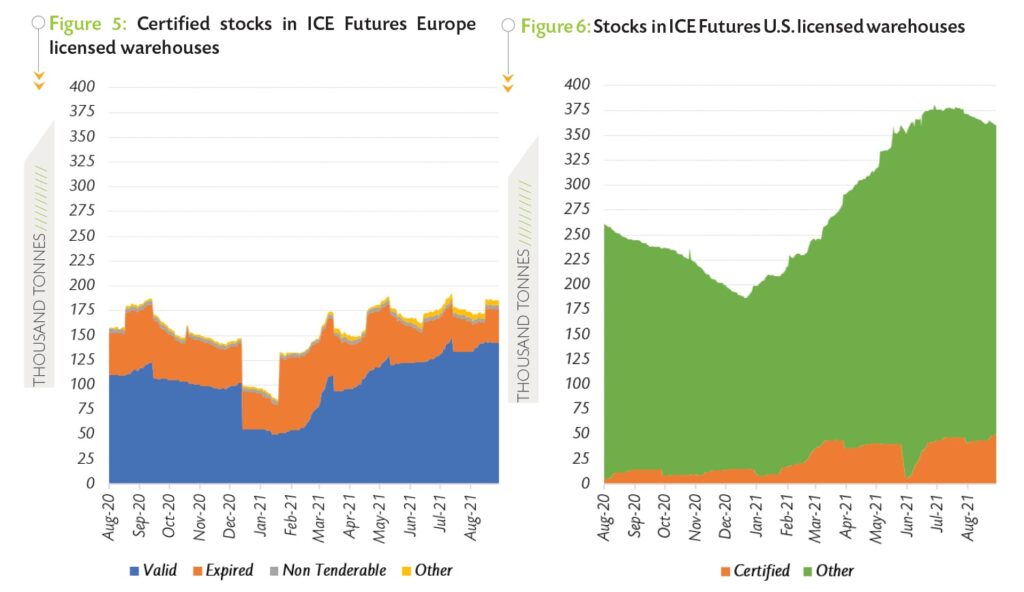 Cocoa graded by the ICE Futures Europe, during October 2020 – August 2021, reached 149,270 tonnes, up by 17% from 127,060 tonnes of cocoa graded over the same period in the previous season. During the above-mentioned periods, the volume of Cameroonian cocoa beans at exchange gradings was reduced from 61,730 tonnes to 51,730 tonnes.

In August total volume of cocoa graded on the ICE Futures U.S. amounted to 105,043 tonnes of cocoa beans during October 2020 – August 2021, up from 24,798 tonnes graded during the same period of the preceding cocoa year. 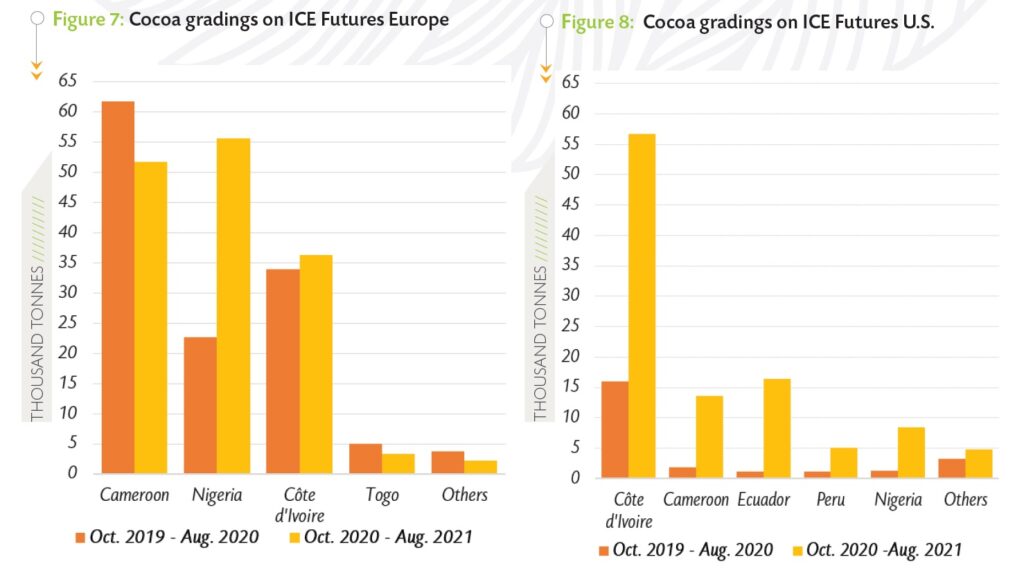 Compared to their levels recorded in July 2021, origin differentials on prices of the six-month forward cocoa contract in Europe and the United States for Ghana, Côte d’Ivoire, Ecuador and Nigeria mirrored signs of recovery in August 2021 (Figure 9 and Figure 10). 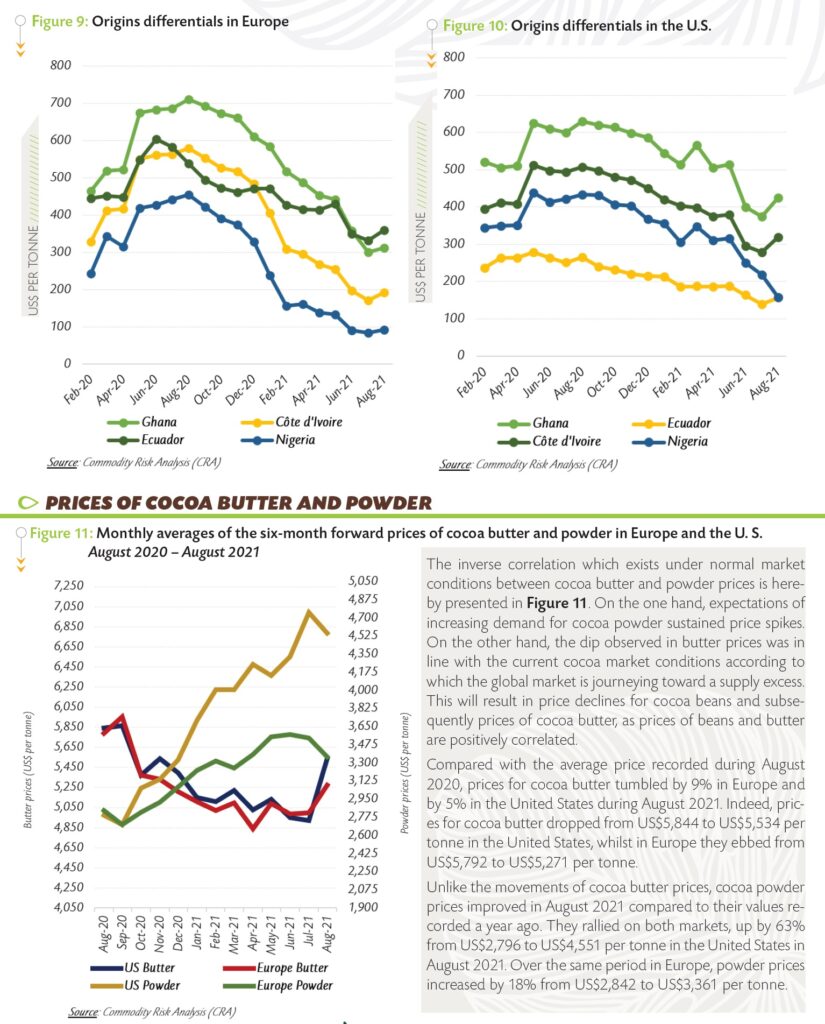 Cumulative arrivals of cocoa beans for the 2020/21 cocoa season in Côte d’Ivoire continued to beat all records at the end of August 2021. Indeed, as at 12 September 2021, cumulative arrivals at Ivorian ports were seen at 2.168 million tonnes, up by 5.2% compared to 2.060 million tonnes recorded a year earlier. In Ghana, cumulative purchases of graded and sealed cocoa beans for the 2020/21 cocoa year were reported at 1.03 million tonnes 19 August 2021, representing the country’s all times highest crop size.

The revised forecasts for the 2020/21 cocoa season published by the ICCO Secretariat in its latest issue of the Quarterly Bulletin of Cocoa Statistics suggests a production surplus of 230,000 tonnes. Increases in production and grindings are expected at 8% to 5.141 million tonnes and at 3.3% to 4.860 million tonnes, respectively. Production is projected to increase by almost 11.1% to 3.975 million tonnes in Africa and by 1.1% to 281,000 tonnes in Asia and Oceania.

Cocoa Market Report: Certified stocks on the rise on either side of the Atlantic