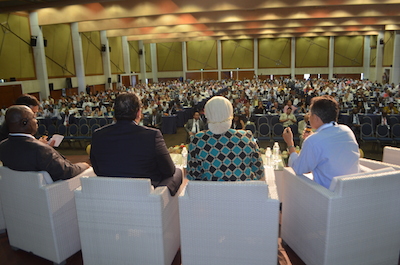 At the kind invitation of the Government of the Dominican Republic, the ICCO’s Third World Cocoa Conference brought together farmers, cocoa processors, chocolate manufacturers, NGOs and donor agencies, government representatives and supporting industry people for discussions of all of the most important issues affecting the world’s cocoa sector, as well as networking and social events showing off Dominican culture.

The subjects discussed at the Conference ranged from the latest production practices for cocoa to the current situation in the world’s chocolate market, and included in-depth coverage of developments aimed at creating a sustainable cocoa sector for all stakeholders.

About 140 speakers brought their expertise from every part of the world and every field of cocoa. (Many of the presentations from the Conference will be available on the ICCO website, www.icco.org from mid-June.)

The bi-annual Conference introduced a number of new features for its third edition, including a successful Cocoa Producers’ Forum, which brought together close to 200 farmers from origins all over the globe; a well attended seminar on understanding and using the cocoa futures market from an established expert in the field; a lively all-female evening launching the Women in Cocoa and Chocolate (WINCC) network; and a packed Fine and Flavour Cocoa Forum highlighting the best differentiated cocoas and the world’s finest chocolate products.

A Gala Dinner for the participants also included presentations of the ICCO awards to deserving individuals and organizations for their outstanding contributions in four different areas of the cocoa sector.

The winners were Dr. Martin Gilmour of Mars Global Chocolate, recognised for his work promoting cocoa research; the NGO Solidaridad for raising awareness of the role of women in the cocoa and chocolate sector; well known fine cocoa expert Mr. Edward Seguine for his tireless work dedicated  to promoting Fine and Flavour Cocoa; and Dominican Republic cooperative CONACADO for its successful and world renowned support of its member farmers.

The Conference concluded with the presentation and adoption of the Bávaro Declaration, a document reviewing progress on the ICCO’s Global Cocoa Agenda, which outlines ambitious plans for the development of the cocoa sector during the next two years up to the 2018 edition of the Conference.

At the closing session of the Bávaro Conference, ICCO Executive Director Dr. Jean-Marc Anga announced that the next World Cocoa Conference would take place in March 2018 in Berlin, by kind invitation of the Federal Government of Germany.