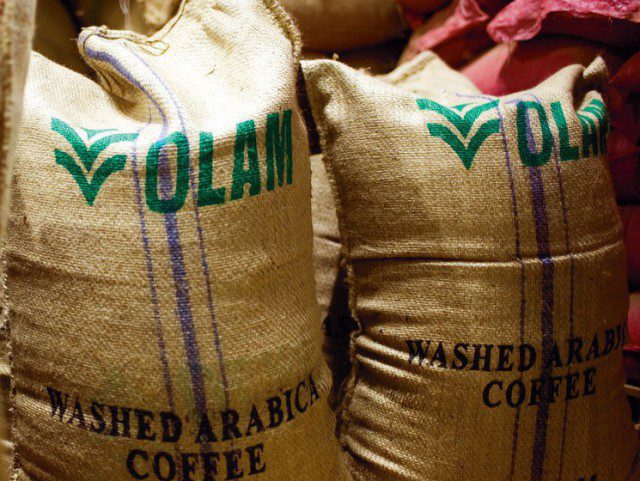 The performance was achieved despite the continued adverse impact of currency devaluation against the US dollar on Olam’s import and domestic distribution businesses in some markets. Reported PATMI was down 92.1% compared to the previous corresponding period (“Q1 2014”).

This is largely because of the swing in exceptional items in the two periods – in Q1 2014, the Company had reported net exceptional gains of S$293.9 million largely from the revaluation of its stake in PureCircle Limited as well as the sale and leaseback of its almond assets in Australia, while Q1 2015 included a net exceptional loss of S$97.2 million resulting mainly from the buyback of outstanding US$750.0 million 6.75% bonds due 2018.

The bond buyback is expected to generate interest savings of about S$55.0-60.0 million per year over the next three years.

Sales volume fell 33.2% as a result of the Company’s deliberate strategy to grow in prioritised platforms while reducing volumes or exiting from lower-margin business.

Revenue declined 10.7% to S$4.3 billion as lower volumes were offset by higher prices of some commodities. EBITDA fell by a marginal 1.5% to S$330.1 million. All business segments except the Food Staples & Packaged Foods segment achieved higher EBITDA.

This was despite the estimated net negative impact on EBITDA from currency devaluation of about S$12.0 million. The Q1 2015 results also included a higher net loss of S$14.7 million on the fair valuation of biological assets compared to a net loss of S$8.7 million in Q1 2014.

Olam reported positive Free Cash Flow to Firm (“FCFF”) of S$120.2 million during the current period, a significant improvement from negative S$424.8 million a year ago.

This was mainly because of higher operating and divestment cash flows, as well as lower working capital requirements.

This included a S$225.9 million investment to acquire MMI which was not part of the strategic plan Capex guidance. Excluding the MMI investment, Capex for the period would be $75.6 million or 58.0% lower than Q1 2014.

“We continue to pursue our twin objectives of profitable growth and cash flow generation while investing in selective opportunities that can enhance shareholder value over time.

We successfully completed the MMI acquisition in the US as well as the strategic partnership with Sanyo Foods in the Packaged Foods business in this quarter and expect to complete the ADM cocoa acquisition by the end of Q3 this year. Successful completion and execution of these strategic initiatives will position us for further growth in three of our large prioritised platforms.” 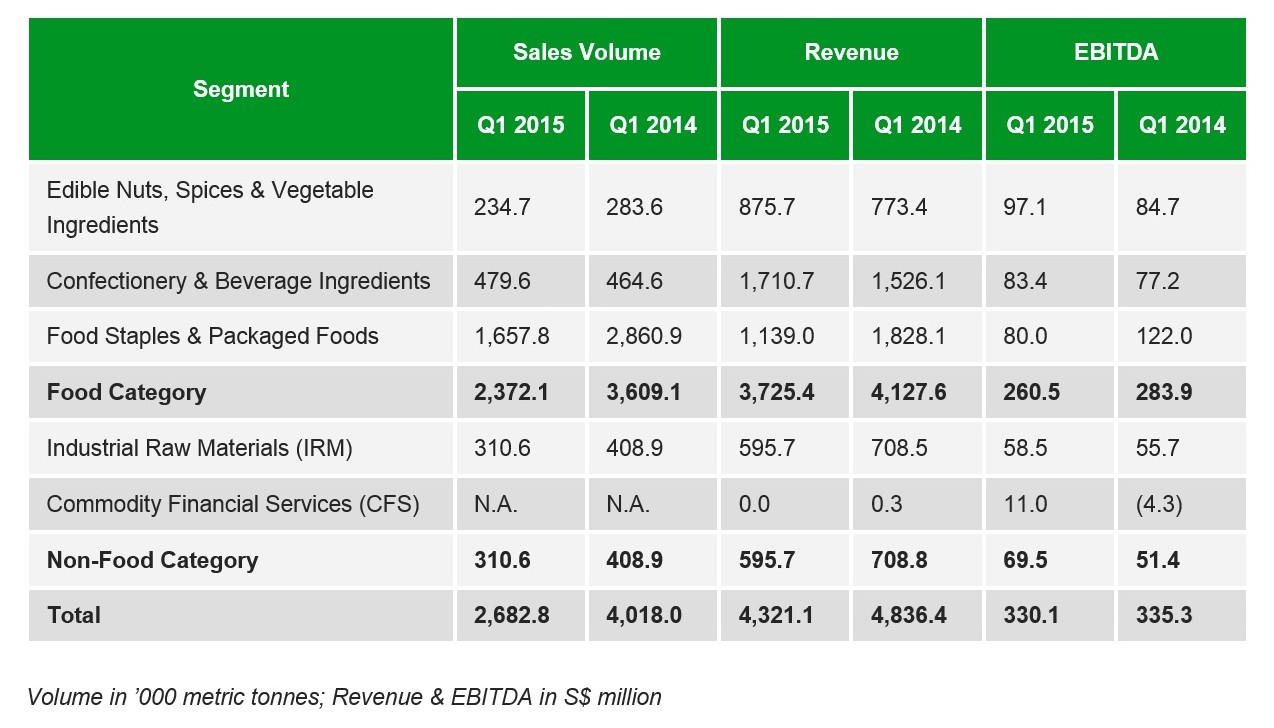 The Edible Nuts, Spices & Vegetable Ingredients segment posted a 13.2% growth in revenues in Q1 2015 despite a 17.2% decline in volumes, primarily on elevated prices for almonds, hazelnuts and pepper. EBITDA grew 14.6% as the almonds business continued to do well given the higher prices, as did the US spices and vegetables business, but the upstream peanut business in Argentina was affected by lower prices and the improved competitiveness of the US peanut industry in the export markets.

The Confectionery & Beverage Ingredients segment recorded a 12.1% increase in revenue on a 3.2% increase in volumes and higher cocoa prices compared to the previous corresponding period. The fall in coffee prices during Q1 2015 has resulted in market illiquidity but market conditions are expected to normalise over the next few quarters. EBITDA grew 8.0% with contribution from both Coffee and Cocoa platforms.

Food Staples & Packaged Foods volumes and revenue fell 42.1% and 37.7% respectively on the back of the deconsolidation of the Grains business in Australia and the discontinued operation in South Africa. Although the rest of the Grains business as well as the Rice distribution, Sugar and Dairy supply chain businesses performed well during this period, overall segment EBITDA declined by 34.4%. This was due to the reduced volumes from discontinued operations, the continued underperformance of Dairy farming operations in Uruguay and the impact of currency devaluation on Packaged Foods and the Palm refining and distribution businesses in Nigeria, Ghana and Mozambique. This adverse margin impact of currency devaluation is expected to continue in the near term.

The Industrial Raw Materials segment recorded a 24.0% fall in volumes due to lower Fertiliser and Wood Products volumes, while revenues fell 15.9% due to lower volumes and lower cotton prices as compared to the prior corresponding period. However, EBITDA grew 5.0% due to higher contribution from the Cotton business and the restructured Wood Products business, partially offset by lower contribution from Rubber, Fertiliser and the SEZ business.

Olam’s Executive Director of Finance and Business Development, A. Shekhar said: “We are pleased with the steady improvement in operational performance across nearly all our business segments during the quarter. We are also actively managing our longer-gestation projects across different business segments, which are expected to be significant contributors as these earnings progressively come onstream.

“The execution of the bond buyback in this quarter is another successful step towards optimising our debt tenor and cost. We are pleased to report that the positive impact of the various actions taken over the last 12 months is now beginning to reflect in reduced interest costs on an ongoing basis,” he added.

The long-term trends in the agri-commodity sector remain attractive, and Olam is well-positioned to benefit from this as a core global supply chain business with selective integration into higher value upstream and mid/downstream segments. Olam believes its diversified portfolio with leadership positions in many segments provides a resilient platform to navigate uncertainties in global markets.