SINGAPORE – Singapore-listed agri-food giant Olam International posted a net profit of S$313.4 million for the fourth quarter ended Dec 31, 2019, more than quadruple the S$75.3 million a year ago. This came on the back of a stronger Ebitda, or earnings before interest, tax, depreciation and amortisation, performance, as well as net exceptional gains of S$83.7 million for the quarter, Olam said in a regulatory filing on Friday.

Earnings per share stood at 9.41 Singapore cents for the quarter, up from 1.92 cents a year ago.

Revenue for Q4 rose 3.3 per cent to S$8.74 billion, from S$8.46 billion in the previous year. This was thanks to higher contribution from its food staples and packaged foods, confectionery and beverage ingredients, as well as industrial raw materials, infrastructure and logistic segments. 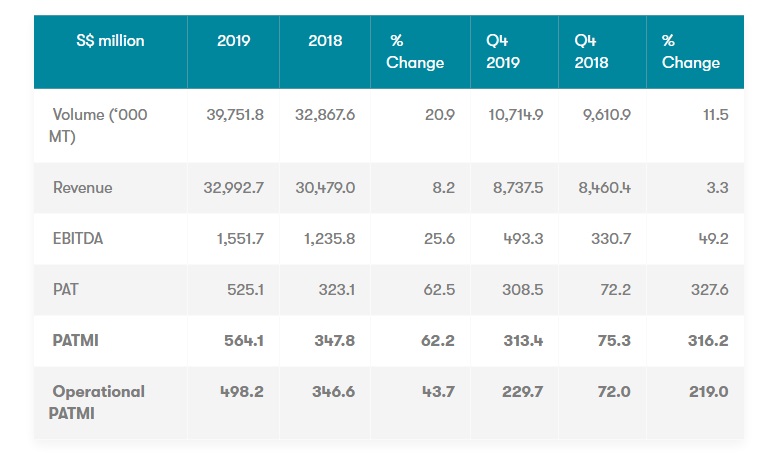 “We are pleased to have successfully completed the first year of our 2019-2024 Strategic Plan with all-round improved operational performance, execution of strategic initiatives and release of cash from targeted divestments. Building on our new Strategic Plan, we recently announced our plan to re-organise Olam into two new coherent operating groups – Olam Food Ingredients (OFI) and Olam Global Agri (OGA) to unlock and maximise the Company’s long-term value. Olam International, as the parent company of OFI and OGA, will play a key role in unlocking the full value of the Olam Group by providing stewardship to the new operating groups and building future growth engines.

“Even as we continue to monitor and mitigate the impact from the COVID-19 outbreak, we are confident that we have strong foundations in place to weather any short-term volatility and accelerate profitable growth in line with key consumer trends and market opportunities.”

“Our proactive management of our capital structure continued to pay off, as we maintained a strong balance sheet and continued to deliver positive free cash flows despite investing

S$1.1 billion of capex to execute our new Strategic Plan. We also continued to diversify our funding sources in 2019 through a mix of traditional and innovative channels, including the world’s first Digital Loan and a second sustainability-linked loan. Our commitment to sustainable financing gives us a clear advantage, builds resilience and enables us to catalyse positive change in our sector.”