The evolution of the results has been impacted by the new IFRS 16 regulation, which dictates that all operational leases, including rents, must be added to the balance sheet as of 1 January 2019. Without these regulations, EBIT, EBITDA and net profit would have increased by 4.5 %, 8.8 % and 8.2 % respectively.

The coffee service department recorded increased turnover of 18 %. EBIT and EBITDA increased by 33.7 % and 55 % respectively. The coffee service companies in France, Belgium and the Netherlands had a particularly good first six months of the year. Several acquisitions were completed in 2018, particularly in the United Kingdom and Norway, which had a favourable influence on the results. Danish subsidiary “Maas”, which Miko acquired on the brink of bankruptcy in July 2018, still has a negative EBITDA. The goal to achieve break-even EBITDA for the whole of 2019 remains however intact. The company has since been renamed “Freehand”. A sum of EUR 3 million was invested in the coffee service department, the greater part in coffee machines which are leased or loaned to clients. 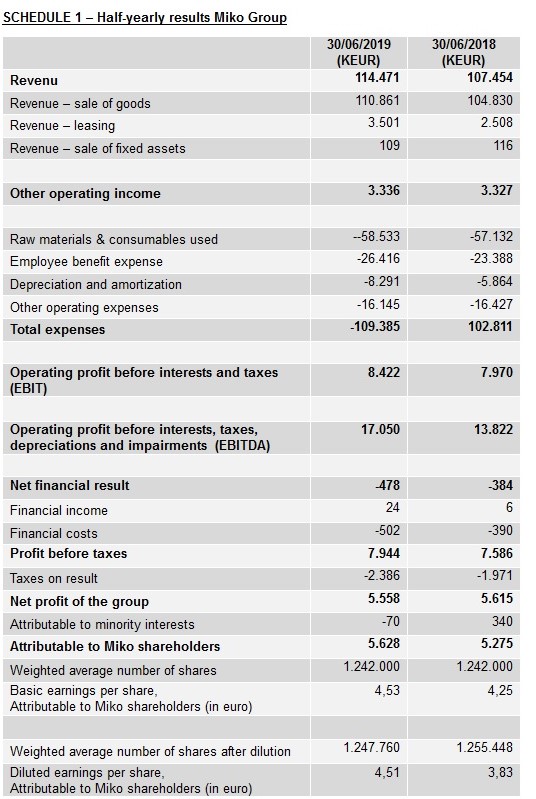 Turnover, EBIT and EBITDA in the plastics processing department saw a decrease of 4.4 %, 12.5 % and 4.7 % respectively. This development is primarily connected to one-time costs which were incurred in order to launch a large, new project. This project’s contribution will not be visible until the second half of the year. In addition, a client for promotional products in Indonesia opted not to place an order this year. A sum of EUR 8.4 million was invested in the plastics processing department, both in order to expand the buildings at the Polish site and to acquire new production machines.

Composition Of The Board Of Directors

There were changes to the composition of Miko’s Board of Directors in 2019. Mr Bart Wauters, a Law Professor, succeeded Mr Flor Joosen as Chairman, and Mrs Inge Demeyere, Managing Director Chocolate Europe at Cargill cocoa and chocolate division, followed in the footsteps of Mrs Sabine Sagaert.

“We can be very pleased with the results of the first six months of this year. Whilst a large project within the plastics processing department was slow to get off the ground, our Group is making fine progress, both in terms of turnover and results. Of course things remain uncertain regarding the second half of the year. How will geopolitical forces, such as Brexit, trade wars and the formation of government impact our economy? Nevertheless, “in a business as usual scenario”, we regard the future with confidence,” says Frans Van Tilborg, Miko Group CEO.

Miko has been active in coffee service for over 200 years and in plastic packaging for some 45 years now, and was floated on Euronext Brussels in 1998. Miko follows a “two-pillar strategy” in which its core activities – coffee service and plastic packaging – are practically independent entities with their own management, so that each activity can follow its own growth path. The Group posted a turnover of EUR 210 million in 2018, with the coffee service and plastics processing division accounting for respectively 53 % and 47 % of this figure. Miko is an international group with companies in Belgium, France, UK, the Netherlands, Germany, Denmark, Norway, Sweden, Poland, the Czech Republic, Slovakia, Indonesia and Australia.