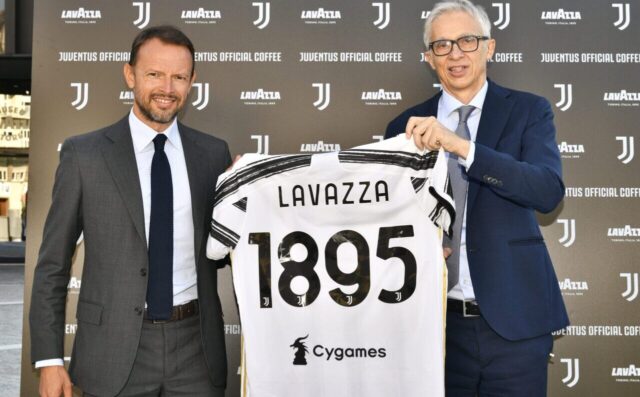 TURIN, Italy – “Official Coffee” at global level of Italy’s reigning champions: this is the core of the agreement entered into by Lavazza and Juventus, based on the characteristic values that they have always shared and have won them respect in Italy and abroad. Uniting these two iconic brands is a shared vision of a future in which innovation, passion and tradition will inform their projects to inspire people, engage them and make them central to a story of excellence.

But that’s not all. Both originating in Turin, nowadays two global realities, Lavazza and Juventus, thanks to their strategic vision and entrepreneurial skills, have been able to create and export a business model that’s universally seen as successful.

The agreement covers a series of marketing and communication actions, such as the visibility of the Lavazza brand at the Allianz Stadium during Serie A and Coppa Italia matches and at the Juventus Training Center, digital and social media activities, and use of the logo in ATL, BTL and web communication.

The partnership will also involve the Juventus women first team, which has always been the Italian champion since its establishment, and the eSports world thanks to some activities with Juventus eFootball team.

The agreement also includes the exclusive sale of Lavazza coffee in all the cafes and hospitality lounges at Turin’s Allianz Stadium (which also have Lavazza Coffee Stations); the use of Lavazza machines in all the Stadium’s “Sky boxes”, as well as the right to supply coffee at the J Hotel.

“We are particularly proud to sign this multi-year partnership with an iconic brand like Juventus, which like us is from Turin and Italian, with an important family heritage and international reach,” said Lavazza Chief Marketing Officer Sergio Cravero. “Sport is one of the strategic pillars of our brand in promoting the true culture of Italian coffee around the world and reaching a wide-ranging audience of enthusiasts. I am sure that this new collaboration too will be more successful than ever at transmitting shared values like striving for excellence and the ability to innovate and inspire people, making the Juventus world even more unique with a coffee experience by Lavazza of the highest quality.”

“We welcome Lavazza into our family of partners with satisfaction. This agreement is a highly significant one for our Club and for our city, uniting two of the world’s most important Italian brands. The projects we will develop together will touch on various areas and exploit the many strategic points of contact between our two operations,” commented Juventus Chief Revenue Officer Giorgio Ricci.

Over the years, Lavazza has been a partner of some of the world’s most prestigious sporting events. In tennis, it’s the only food & beverage brand to have sponsored all four of the Grand Slam tournaments (US Open, Wimbledon, Roland Garros, Australian Open).

In football, Lavazza is internationally known and admired for its major partnerships with prestige clubs, projects characterized by three common denominators: dedication, genuineness and innovation. In 2018, Lavazza chose to address millions of Premier League fans by means of long-term agreements under which it was Official Coffee Partner of Arsenal F.C. and Liverpool F.C., two of the most prestigious clubs in the UK.

Löfbergs appoints a Circular Transformation Officer, aims for zero was...

Millie Chan (Gruppo Cimbali): «Covid has taught us to be flexible, vigilant and reactive»