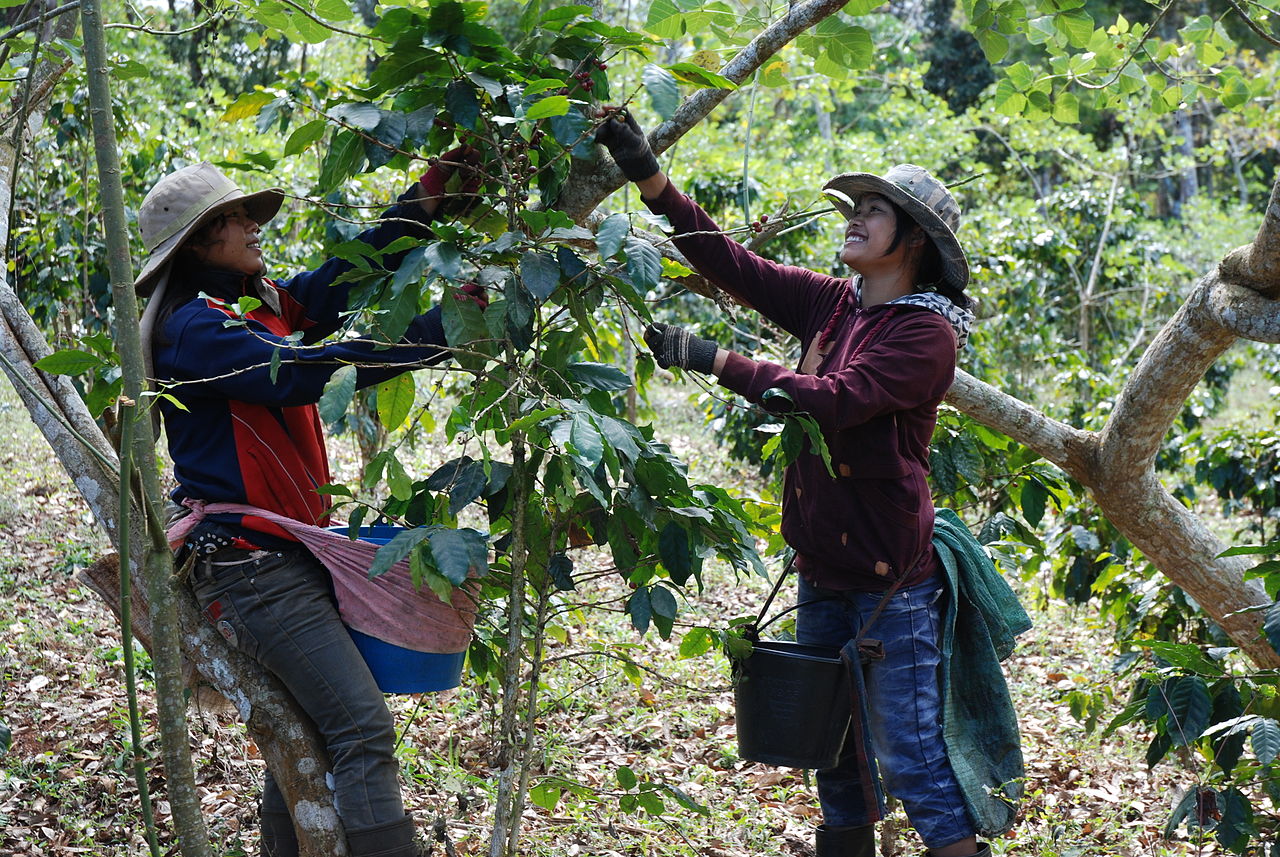 ON THE Bolaven Plateau, Bounthong Thepkaisone waded through his 5-hectare coffee plantation in Mai village, Pakxong district, in Laos’ Champasak province. He has been growing coffee since he left high school almost 30 years ago. He recalled what his parents taught him about nurturing coffee bushes – “always give them shade while removing the surrounding grass”.

For Bounthong, producing coffee is his present and future. He can’t imagine doing anything else over the next 10 years. As for his parents, coffee has been his main source of income, which now allows him to sustain his wife and his three teenage children.

The same can be said for many of the 1,855 farmer families in his community that make up the Bolaven Plateau Coffee Producers Cooperative (CPC), an organisation of which Bounthong is president, created with the support of the Laotian government and the French Agency for Development (AFD) in 2007.

The coffee produced by the CPC is grown naturally by the locals and is organic. That has been the tradition.

“Our coffee is different from others because it is grown in the Bolaven volcanic soil – this makes Bolaven’s taste unique – its sourness, bitterness and smell are just right,” Bounthong said proudly.

“I think Bolaven coffee is getting known by the market,” he added confidently.

The increasing number of exports from the CPC reflects his opinion. In 2012, the cooperative exported 603 tonnes of green coffee. By 2014, exports exceeded 1,000 tonnes.

Laos has a discrete place among the world’s coffee exporters. According to official statistics, 2013 was a record year, with almost 30,000 tonnes of green coffee beans exported, a very modest amount compared with the production of neighbouring Vietnam.

However, coffee is one of Laos’ top income earners among all exports of agricultural products. In 2012, Laos’ coffee earnings represented about US$60 million (Bt2.125 billion).

But world coffee prices vary and have fallen in the past three years.

Fortunately organised coffee producers like Bounthong do not suffer much because of the large amounts they sell, and are also helped by their organic certification. But individual producers suffer when the price falls because they get a much lower return on their investment.

“Price volatility is one of the challenges that this sector faces. We need to export and be competitive in the context of low prices as well, if we want to achieve our goals by 2025,” said the coordinator of the Laotian Coffee Board, Khambone Phasouk.

The Laotian Coffee Board is the national body in charge of mobilising the coffee sector to achieve the goal of exporting 300,000 tonnes targeted in the Laotian Coffee Sector Development Strategy.

Laotian coffee growers and businesses were seeing some signs of recovery at the beginning of this year, with the price at $4,100 per tonne. But this has now dropped to about $3,000, while the price of green |coffee beans has dropped from |28,000 kip to 19,000 kip (Bt82) per kilogram, Vientiane Times reported in June.

They point out that Geographical Indication (GI) is a tool they can use to make the country’s coffee more exportable, recognisable and trusted by consumers around the world, so that incomes can become more stable.

Currently contributing to the promotion of Laotian coffee are internationally recognised standards such as Fair Trade, and organic-produced certifications, which organisations such as the CPC follow.

Other tools are intellectual-property legal protections, which GI is part of, and can also lead farmers and stakeholders to increase their income.

“It’s difficult to make our national product known or popular in the global market, but GI will help in promoting Laotian coffee. We need support from the government and an active organisation while protecting traditional farming methods,” Bounthong said.

Asean countries are enhancing their agricultural exports, boosting tourism and improving rural livelihoods thanks to the increasing number of agricultural and handicraft products protected by Geographical Indications.

Thailand currently has 64 GI registrations, while Indonesia has 26, Malaysia 35, and Vietnam 41.

Laos is one of the rare agricultural countries in the region without |any agricultural product registered under the GI scheme, but that is set |to change.

The Department of Intellectual Property of the Ministry of Science and Technology is coordinating the GI registration process and managing GI national development.

“For the first time, Laos will be able to register agricultural products thanks to growing improvements in its capacity to set and implement GI,” said the director-general of the department, Dr Khanlasy Keobounphanh.

This year, two products are on the priority list for the country’s first GI applications: Bolaven coffee and Khao Kai Noi sticky rice.

“The Laotian government has a newly created trademark and a GI division. Also, government staff and all the coffee supply-chain actors are enhancing their coordination and knowledge of GI implementation thanks to a project supported by the Food and Agriculture Organisation and the AFD, which is allowing Southeast Asian countries to benefit from more experienced countries,” Khanlasy said.

Project coordinator Stephane Passeri said the Food and Agriculture Organisation, AFD and the Department of Intellectual Property would jointly organise a follow-up event in Pakxe district, Champasak province, on October 30 next Friday to prepare for Laos’ first national GI application for Bolaven coffee.

The event will also launch the newly created Geographical Indication and Trademark Division at the Department of Intellectual Property.

Other benefits of Geographical Indications are the protection of producers against fraud, misuse, and counterfeiting.

Laos has some of the required legislation to obtain the geographical recognition, notably the Intellectual Property Law dating from 2008, but the government is waiting for the required implementation regulations to be approved to allow for GI protection to be in place, as the first essential step for Laotian GI protection and promotion abroad.