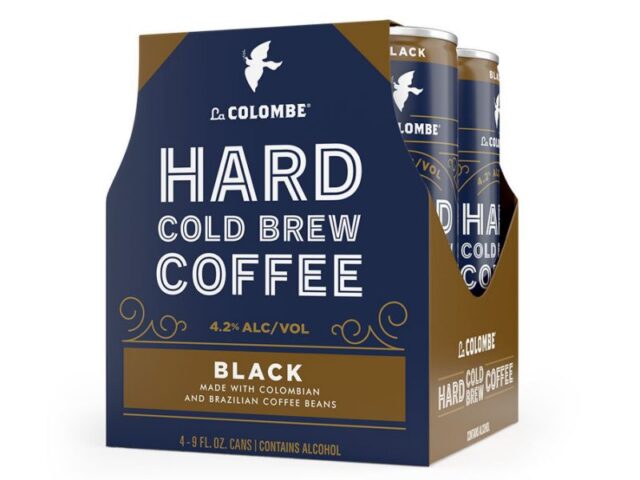 It will be available in two varieties: Black, which is described as “an authentic, smooth cold brew coffee with a delicate balance of sweetness and bitterness highlighted by notes of baker’s cocoa,” and Vanilla, which is said to also be “accented by rich vanilla bean and dark chocolate notes [with] a hint of vanilla sweetness that balances the dark, roasted flavors from the coffee beans.”

“We’re thrilled to team up with La Colombe on this exciting launch — they bring deep expertise in the category and their focus on quality sourcing, roasting and innovation made them the perfect partner,” Sofia Colucci, vice president of innovation at MillerCoors, said in the announcement. “Millennials are constantly looking for new products to keep up with their busy lives. Now people can start or keep the celebration going by grabbing a La Colombe Cold Hard Brew Coffee.”

Speaking of keeping the celebration going, La Colombe Hard Cold Brew Coffee will be promoted with the clearly youth-targeted slogan, “Rally like a grown-up.” Not that this drink packs a massive punch (4.2 percent ABV is fittingly the same as a Miller Lite), but since mixing alcohol and caffeine can sometimes be controversial, you may be left wondering when a good rally time is. “There are many social occasions to enjoy La Colombe Hard Cold Brew Coffee, like all-day events including weddings, tailgates and barbecues or when you want to transition from day to night while keeping the momentum going,” Todd Carmichael, CEO and co-founder of La Colombe, told me via email. In fact, he suggested you could drink it pretty much any time to you might have a coffee: “It’s ideal for Saturday brunches, early morning golf tee times, or in the evening between dinner and a later celebration,” he added.

As for why the roaster decided to team with MillerCoors, Carmichael addressed that, too. “La Colombe has a long legacy of working with some of the most innovative chefs and restaurants from around the world. We have deep roots in the culinary scene, starting as purveyors of roasted coffee in the kitchens of Philadelphia and New York. Now, 25 years later, we are roasting and purveying cold brew to some of America’s most iconic companies — like MillerCoors,” he told me. “MillerCoors and La Colombe are similar in many ways. We are both beverage companies that are pushing the boundaries of what is possible in food and beverage. The introduction of the Hard Cold Brew Coffee is a reflection of that.”