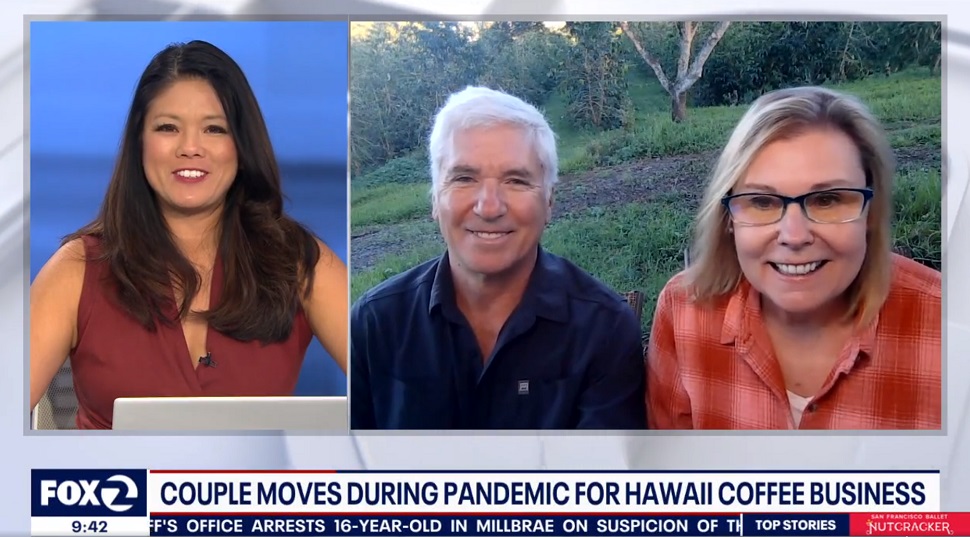 In the four-minute segment, they were asked about their “radical Covid-19 pivot” to coffee farming, their new life as coffee farmers, and their give-back program, “Care In Every Cup.” Their black terrier-mix “Tickle” even made a cameo appearance.

Joanie Wynn, Co-owner at Kona Earth commented, “It was a bit nerve-wracking to do a live-feed from our coffee fields. Luckily, our internet signal held up but it was certainly a kick of adrenaline to start our day.”

Kona Earth gives back with “Care in every cup”

As with all of their business ventures, Steve and Joanie Wynn are committed to giving back. To that end, their Care in Every Cup program donates a percentage of proceeds from every Kona Earth purchase to their local non-profit partner, The Kohala Center. They even created a special holiday gift item that donates $5 from each purchase to the organization.

Kohala Center is a non-profit research, education, and ‘aina stewardship located in Waimea on the Big Island. They do important work protecting essential ecosystems on-island including the reefs, cloud forests, and farming land.

Cheryl Ka‘uhane Lupenui, President and Chief Executive Officer of Kohala Center comments, “At The Kohala Center, we believe the more we know about where our food, water, ancestors and, even coffee come from, the better we will care for these precious resources. Thus, Care in Every Cup is a great partnership to join a community that engages respectfully with ‘āina across generations here in Hawaii!”

As a family-owned and operated farm, husband and wife owners Steve and Joanie Wynn oversee every phase of the coffee production process at Kona Earth.

The coffee fruit, called “cherry”, is hand-picked over multiple rounds during the harvest season. Since Kona Earth is at a higher elevation, their harvest begins and ends a bit later than lower elevation farms. This year, picking began in mid-September and they anticipate the final round of the 2021/22 harvest will wrap up in late January/early February, with 4 or 5 rounds of picking every month or so during that time.

After picking, the cherry, is run through a pulping machine to separate the outer fruit from the coffee bean inside. The remaining fruit is composted and used to fertilize the fields, so there is very little waste.

Next, the wet, green beans are laid out on a large drying deck and raked every few hours to keep air circulating as they dry. The Wynns also have a special coffee dryer that can be used when the quantity overwhelms the space on the drying deck.

Once dried, the outer parchment layer of the bean is removed in a process called dry-milling. This is also when the coffee is sorted and graded according to size and bean quality. Beans that qualify as top grades of Kona coffee are sold to customers including peaberry, extra fancy, and estate-grade coffees. Kona Earth only sells single-estate 100% Kona coffee, never blending their beans with coffees from other countries or other farms.

Recently, the couple purchased a JM Estrada roaster for the farm so that they can do their small-batch roasting on site. This enables them to ship the freshest whole bean coffee direct to consumers. They sell their Kona coffee through their e-commerce store at KonaEarth.com.

Currently, the couple is knee-deep in round three of picking for this year’s harvest and busy shipping out last-minute holiday orders. Kona coffee farming is labor-intensive and it requires a dedicated, hand-crafted approach. The Wynns are both excited about their new venture and they look forward to growing the farm and business over the coming years.

Kona Earth is a family-owned and operated coffee farm on the Big Island of Hawaii. Its authentic, single estate 100% Kona coffee is hand-picked and small-batch roasted for rich flavor and incredible freshness.

Kona Earth is situated at 2000 feet of elevation on the tropical slopes of the Hualalai volcano. The high mountain, “mauka” climate allows the coffee trees to grow lush. Cooler temperatures and ample rainfall make for ideal growing conditions. The fruit matures slowly, resulting in coffee beans of remarkable size and quality.

Currently, Kona Earth has roughly 12 acres planted on a total of 26 acres on their two contiguous parcels. Plans are underway to plant “keiki”, or starter plants in 2022 to increase the number of coffee trees on the farm.

The Kona Coffee Belt is a tiny strip of land on the western side of Big Island, Hawaii. Just a few miles wide and about 30 miles long, the area is known for growing exceptionally fine Arabica coffee. It combines a mild, tropical climate with minor temperature variations and mineral-rich, volcanic soil.

Owner/operator Steve Wynn commented, “It’s a “Goldilocks” zone for specialty coffee and the area is well-known to produce one of the most delicious coffees on the planet. And, as one of the few gourmet coffees grown here in the United States, Kona coffee farms reflect high farming standards. Unlike coffee farms in other regions of the world, workers are paid a living-wage. This adds to the overall cost to produce Kona coffee, but we believe that the result is well worth it. It’s a delicious gourmet coffee with a special flavor that is only found here.”