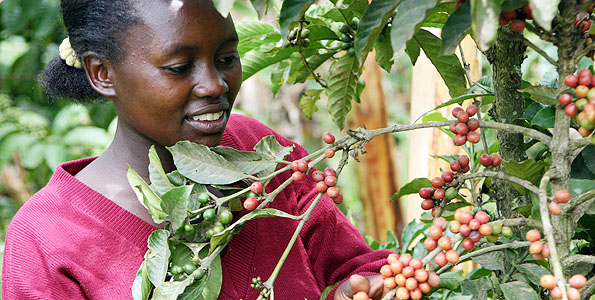 NAIROBI, Kenya – Kenya’s coffee production is expected to hit 47,000 metric tonnes in 2016 up from 45,000 metric tons in 2015, officials said on Tuesday. The production increase is due to expanded area under coffee cultivation, according to Agriculture Food Fisheries Authority (AFFA) Interim Head of Coffee Directorate Grenville Melli at a coffee forum in Nairobi.

“The land under coffee production has increased from 109,000 hectares to 114,000 hectares,” Melli said during a sensitization meeting on the upcoming trip to Kenya by global coffee buyers in November.

The East African nation is expected to host over 30 of the biggest coffee buyers in the world.

Melli said that Kenya has developed a roadmap to revive the country’s coffee production which used to produce approximately 170,000 tonnes annually.

“We have begun a project to distribute free coffee seedlings to farmers so that they increase their production,” he said. Kenya’s coffee production is approximately 0.1 percent of global production.

“However our coffee is used to blend coffee from other countries because of its high quality,” the AFFA official said.

Kenya currently exports to over 30 countries around the world with Germany, the United States, Belgium, Canada and Nordic countries taking a majority of the produce. AFFA is currently seeking to diversify export markets of the cash crop.

“We have identified a number of potential countries such as China, Japan and Poland where we will intensify marketing efforts,” the coffee official said.

He noted that Kenya is prioritizing the increased production of coffee due to numerous benefits.

“It has the potential to become the biggest source of foreign exchange in Kenya,” Melli said.