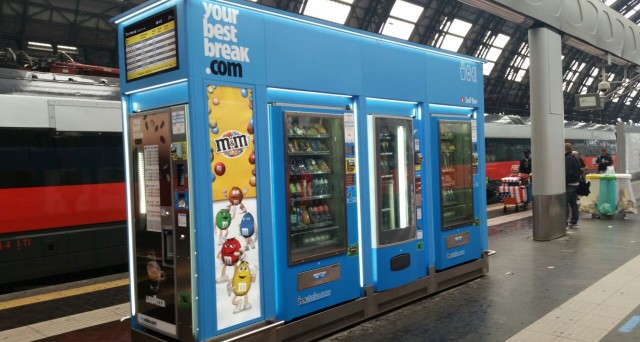 GRAND DUCHY OF LUXEMBOURG – The Board of Directors of IVS Group S.A. (IVS.MI) chaired by Cesare Cerea, convened on March 21st, 2017 in Seriate (BG), has reviewed and approved the Annual Financial Report at 31 December 2016, the Management Report and related documents.

The Board has mandated the Chairman to convene the Shareholders’ Meeting, in accordance with law and the Company’s statute, on 9 May 2017, at 11.00, 18 Rue de l’Eau L – 1449, L-Luxembourg, Grand Duchy of Luxembourg, to vote on the approval of the Annual Report 2016 and related matters, on the allocation of the Company’s result and the renewal of the auditors mandate.

The total number of vends of IVS Group reached in 2016 its historical peak, growing from 694.9 million to 718.3 million; an increase of 3.4%, deriving from both external growth, and IVS capacity to award new clients, at a pace higher than the physiological and very low churn rate.

The increase in revenues in the vending business was of 0.1% on a like-for-like basis (+0.6% excluding the semi automatic OCS-Office Coffee Service segment) and around +1% net of the change effect of working days. Volumes like for like and adjusted for working days decreased by 0.8% (0.6% in Italy and 0.3% excluding OCS). Volumes trend confirms the gradual end of the effects of consumption crisis of the past years. In fact, in the fourth quarter 2016, the like-for-like, net of working days and OCS, was positive: +0.3% in volums and +2.3% in sales.

It is important to notice that during the third quarter 2016, the cold weather caused a decrease in the sales of beverages, for a total of approximately 4 million items (-8.6% compared to the same period of 2015), affecting full year results, with lower sales of around Euro 2.2 million.

With respect to the OCS segment, which currently represents around 5% of consolidated sales related to vending activity, it must be remembered that IVS Groups owns a 50% interest (hence consolidated only at equity value) in Cialdamia S.r.l. and its French affiliate MB Web S.a.s., which during 2016 sold in total, through the web channel, approximately 15 million coffee pods (corresponding to around Euro 4.2 million sales). Moreover, in the OCS segment, in the fourth quarter 2016, after the signing (occurred on October) of the the exclusive distribution agreement, in most of Italian regions, of the professional line of Nespresso™ coffee pods, volues increased by 38.6% compared to the corresponding period of 2015.

The average price per vend increased by 0.8%, strongly influenced by the product mix which, during the summer with a cold climate, has seen a decrease of consumption of beverages and cold drinks, which have higher unit prices.

The businesses bought during the year (Euro 8,1 milioni pro rata from the date of the acquisition) contributed for 2.2% to consolidated sales.

During 2016 it was made available, on almost 3,000 vending machines the application CoffecAppTM which allows the purchase and payment of products with smart phones. At the end of the year the users of this app exceeded 30,000, with an increase of registered users and sales in the range of 1000% compared to 2015.

IVS Group continued along the year its capex policy, aimed at a continuous updating of its vending machine fleet, introducing innovative technologies and new models (i.e. larger format and customized hot beverages) destined to new market niches, which already had succes amongst clients.

2016 good operating results would have been even better if they had not been influenced, in the third quarter, by the already mentioned cold weather and beverage consumption decrease, which caused e decrease of contribution margin of around Euro 1.8 million. The contribution of the acquired business to profitability, initially limited, will become higher than average group margins after their restructuring and integration, which usually require 10-12 months.

Non recurring operating costs are mostly related to acquisitions (legal/notary costs and personnel restructuring), for an amount of Euro 2.3 million, and to the early reimbursement of high-yield bonds, with the overlapping, during the first quarter, of the old and new issue and related costs (around Euro 4.9 million). Total adjustments, net of the related tax effect, amounted to Euro 4.9 million.

During 2016 IVS Group hase made payements for investments totalling Euro 49.7 million, of which Euro 38.3 million for net fixed assets, including the balance due for investments made in 2015, and Euro 11.4 million for acquisitions. On 1 April 2016 , in connection with the early redemptions of IVS F. S.p.A. bond due 2020 was paid for the call option and related interests an amount of Euro 17.8 million. In the last three months of 2016 were also paid instalments of the Antitrust fine, for a total amount of Euro 3.2 million. The VAT credit, Euro 15.0 million at year end, is not included in the net financial position.

More than 100% of the consolidated net financial debt is represented by Euro 240 million of IVS Group new notes, due 2022, issued on November 2015, at a fixed interest rate of 4.5%. In addition to the liquidity available on bank accounts, the group has unused committed term loans for an amount of around Euro 50 million.

On 17 January 2017, in order to accelerate the effects of the distribution agreement of Nespressotm coffee pods, IVS Italia acquired the related businesses of Gruppo Argenta SpA and its affilate Somed SpA, which declare sales of around Euro 8.3 million, for a provisional price Euro 5.9 million, including a stock of almost 10,000 machines.

On 31 January , IVS controlled company DAV S.L., acquired Grup Ibervending S.A. one of the major players in the Spanish vending sector, with sales exceeding Euro 23 million, at a price of Euro 25.5 million.

On February were signed two preliminary contracts for the acquisition of two businesses in Calabria and Emilia Romagna for a total value of around Euro 0.7 million.

On 7 June 2017 IVS Italia will have an hearing in front of TAR Regionale del Lazio (central administrative court) with reference to the appeal presented against the Antitrust sanctions.

The Chairman of IVS Group, Cesare Cerea, with reference to the past yer and to 2017 prospects, commented:

“With its record results so far, 2016 confirms the validity of our company’s actions and investments, and represents an excellent base for further growth, also thanks to a market scenario that, at least in the beginning of 2017, seems quite favourable. The important transactions completed between the end of 2016 and the beginning of 2017 allow to think about new developments, in Italy and abroad, in all the market segments where our group operates.

IVS aims at consolidating its leadership, not only in Italy, in a context of excellence of its service quality, organisation, search for innovation, economic results and financial solidity”.