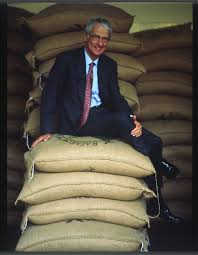 TRIESTE (Italy) – At the end of the 19th century the streets of Trieste were filled with elegant cafes which attracted leading authors and intellectuals of the day and a well-heeled clientele with an eye for the latest trend (in the left picture, Martino Zanetti Hausbrandt’s owner). So it’s not surprising to find that one of Italy’s leading coffee producers, Hausbrandt, was founded in 1892 in this stunning northeastern Italian city that sits at the crossroads of Europe.

Hermann Hausbrandt was a merchant-marine commander before he became one of the first of the artisan coffee roasters in Trieste when it was still a part of the Austrian-Hungarian Empire. Drawing on the finest Viennese tradition, he managed to make his mark and deliver top-quality coffee in a city which had been sipping coffee for a couple of centuries. The company began as a highly innovative business and was the first to offer its customers pre-packaged products, processed entirely at the company’s facilities and sealed in metal containers to preserve the coffee’s aroma and freshness.

Today Hausbrandt is based in Nervesa della Battaglia near the city of Treviso to the north and employs more than 500 people. It has more than 20,000 clients, including restaurants, cafes and bars, and ships more than 4,000 tonnes of roasted coffee around the world every year. That’s around 600 million cups of espresso.

Entrepreneur Martino Zanetti took over the company in 1988 and his son Fabrizio has been working beside him as managing director since 2005. Together they have strengthened the company’s expansion by building relationships with leading hotels, museums, restaurants and cafes and other institutions. “Companies are born from a winning idea when it is continually fed by passion,” says Martino Zanetti. Now before you sit down to a performance of the Bolshoi ballet in Moscow or dip your toe in the pool at the Paradise Island Resort in the Maldives you can sip Hausbrandt.

Closer to home the brand is found at the historic Caffe’ Quadri in Venice or the nearby Guggenheim Museum as well as the Uffizi Gallery in Florence. Today the company’s coffee is sipped in 70 countries around the world and it has recently added beer, prosecco and other products to its beverage portfolio. But the company’s commitment to coffee remains just as strong and it is committed to provide its customers with “excellence” and fill every single cup with “enjoyment”.

Hausbrandt carefully selects only the best-quality Arabica and Robusta coffee beans, which it acquires from countries in Latin America and Africa. Drawing on advanced agronomic techniques it blends the most prized varieties of coffee and carefully monitors the roasting process using the latest digital systems.

Quality is backed up by laboratory analyses, including both visual and microscopic inspections, as well as further tests before the coffee leaves the port of Trieste. Once a shipment arrives at its destination, another sample is sent to the company to verify that the cargo matches the high quality of the original and to determine if any changes occurred during the voyage. Then the coffee once again undergoes further analysis to certify the coffee’s quality.

Today the company has branches in France, Monaco and Slovenia, as well as authorized partners in several countries.