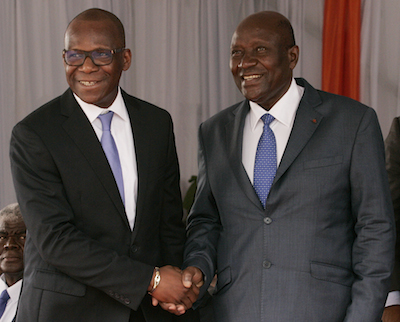 ABIDJAN, Côte d’Ivoire – In a landmark event for the Organization, around 500 people gathered on 25 April for the formal inauguration of the ICCO’s new headquarters in Abidjan, Côte d’Ivoire.

The ceremony took place during the 95th regular session of the International Cocoa Council and subsidiary bodies.

The relocation of the ICCO to Abidjan should focus even more the Organization’s attention towards the requirements of producers.

“Côte d’Ivoire is now convinced that the presence of ICCO in Abidjan will provide opportunities to better understand the realities of the sector and to better appreciate the expectations of producers,” Vice President Kablan Duncan said.

“Through our establishment in a producing country,” Dr. Anga said, “we want to offer better access to information on the world of cocoa and to identify the existing opportunities that producing countries could benefit from.

The goal is to improve the transparency of the cocoa market by providing member countries with cocoa studies, analyses and statistics, as well as forecasts on world supply and demand.”

The move to Côte d’Ivoire’s commercial capital after 44 years being headquartered in London, comes after a decision by the Council in 2015, following an invitation by the Ivorian government. The government provided and completely refurbished a three-storey building in the city’s Deux Plateaux area, which now houses the Organization’s 25 staff members.