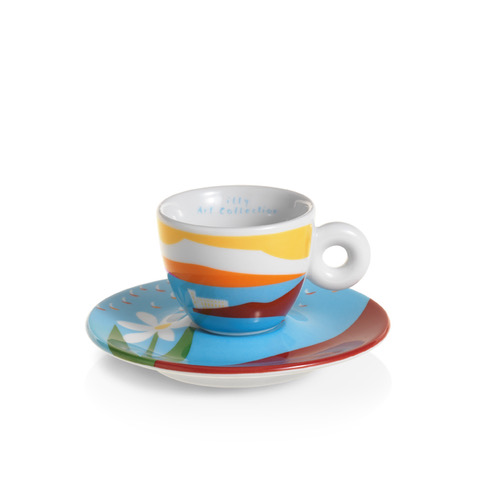 TRIESTE, Italy — As is traditional illycaffè celebrates Barcolana, Trieste’s historic international regatta, with a special illy Art Collection cup. This year’s cup is designed by Olimpia Zagnoli, an Italian illustrator known around the world for her original, colourful and geometric style.

illy also invited the artist to create the poster for the 51st Barcolana, expressing all the excitement of the event, and the same emotions are captured in this unique artwork.

The flower in the foreground on the saucer becomes a symbol of beauty which embraces the sea, a vulnerable ecosystem that must be protected. It recalls the famous poem by Saba, which compares Trieste to an uncouth and voracious youth, with blue eyes and hands too large to give a flower.

This special illy Art Collection cup pays tribute to the city, the world of sailing and the love of good coffee. A warm embrace for the Gulf of Trieste and the thousands of sails that participate in the regatta, symbolically uniting the Sea and the Earth and reminding us of the need to protect their splendour and fragility.

“illycaffè has supported Barcolana for many years, an event that is a symbol of the city of Trieste, the local area and its values. We offer the event a ‘touch of beauty’, using the language of art which the company has long used to express itself, bringing the beauty of an initiative like this to the whole world, captured in a cup” says Massimiliano Pogliani, illycaffè CEO.

The illy Art Collection cup by Olimpia Zagnoli will be available from October 7th for €25, from illy-brand stores (illy Caffè and illy Shop) and from the e-shop www.illy.com.

The illy Art Collection was created in 1992 from an idea by Francesco Illy: a unique collection of numbered and signed cups. To date, the project has involved over 100 internationally renowned artists, including great masters such as Marina Abramovic, Michelangelo Pistoletto, Louis Bourgeois, and Mark Quinn … as well as young creative talents. Through the illy Art Collection, an everyday object, the cup designed by Matteo Thun, becomes a white canvas which continues to inspire the talents of contemporary artists, making the gesture of sipping an espresso into an experience that engages both the senses and the mind.

Olimpia Zagnoli was born in Reggio Emilia in 1984 into a family of artists – her father was a photographer and her mother was a painter. She moved to Milan, where she graduated from IED in illustration and animation. After her diploma she began her career in Italy with small self-produced projects until, in 2008, she decided to move overseas to New York. Here she met an art director at the New York Times and from that moment began numerous collaborations with major American newspapers, such as the Times, the Guardian and the New Yorker as well as magazines like Rolling Store and Glamor. Olimpia has become recognised around the world for her unmistakable style with minimalistic geometric lines and rounded colourful figures drawn from the world of pop. She has created illustrations for numerous advertising campaigns for major companies, as well as for famous fashion brands and children’s books.

Löfbergs takes a stand for the equal value of all people with Equality...