LONDON, UK – The International Cocoa Organization has released its revised forecasts for the current 2015/2016 cocoa year and revised estimates of world production, grindings and stocks of cocoa beans for 2014/2015, as summarized below.

The data published in Issue No. 2 – Volume XLII – Cocoa year 2015/2016 of the Quarterly Bulletin of Cocoa Statistics reflect the most recent information available to the Secretariat as at the middle of May 2016. 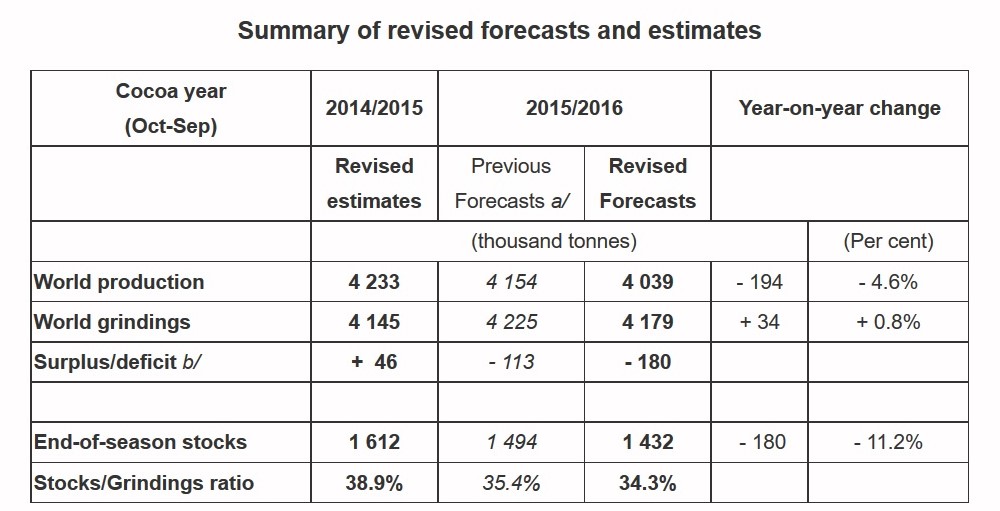 Notes:
a/   Estimates published in Quarterly Bulletin of Cocoa Statistics, Vol. XLII – No. 1 – Cocoa year 2015/2016
b/   Surplus/deficit: Net world crop (gross crop adjusted for loss in weight) minus grindings
Totals may differ due to rounding.

This issue of the Bulletin contains the Secretariat’s revised forecasts for the 2015/2016 cocoa year, as well as data for the past four years of production and grindings of cocoa beans, detailed by country.

The main features of the global cocoa market are illustrated in colour charts. In addition, the Bulletin includes comments on crop and demand prospects in the leading countries for the current season, and a review of price developments on international markets for cocoa beans during the January-March quarter of 2016.

Statistical information on trade in cocoa beans, cocoa products and chocolate, by country and by region, published in this edition, covers annual data from 2012/2013 to 2014/2015 and quarterly statistics for the period January-March 2014 to July-September 2015.

Details of destination of exports and origin of imports for leading cocoa exporting countries are also provided. Historical statistics on cocoa trade and consumption, by country and by region, for the period 2006/2007 to 2014/2015 are presented for reference.

Copies of the Quarterly Bulletin of Cocoa Statistics, including Microsoft Excel files and Adobe PDF format, can be ordered by completing and returning this form or from the ICCO Secretariat at the address below: