This review of the cocoa market situation reports on the prices of the nearby futures contracts listed on the ICE U.S. (New York) and ICE Europe (London) during the month of July 2018. It aims to highlight key insights on expected market developments and the effect of the United States dollar exchange rates on cocoa prices.

Hence, under normal market conditions, the London prices should be higher than the New York ones.

And, any departure from this price configuration provides indication on the relative, expected availability of cocoa beans at the delivery points, designated by the exchange, at contract expiration. 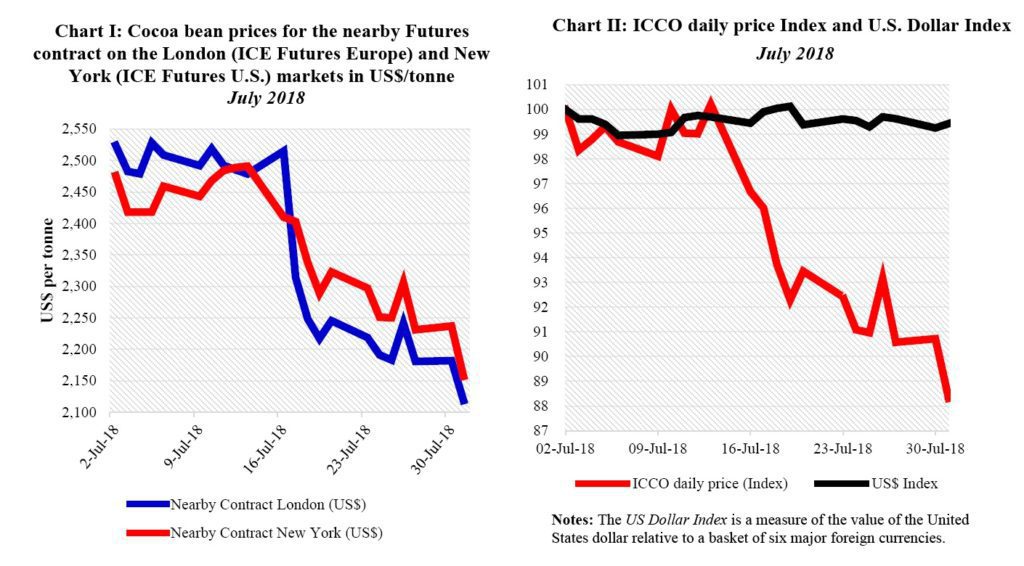 In July, futures prices regressed sharply as a result of persistent expectations of a strong close of the 2017/18 mid-crop. During the period under the review, the price of the front-month contract averaged US$2,357/tonne and US$2,366/tonne in London and New York respectively.

During the two first weeks of July, futures prices remained relatively stable and attained their highest level of the month. Prices averaged US$2,499 /tonne in London and US$2,456 /tonne in New York.

During this period, the spread between London and New York prices was at times higher than the expected spread under normal market conditions, £50 /tonne or US$66 /tonne using the month’s average exchange rate.

Thereafter, prices dropped substantially on both markets as the recent increase in grindings activities in Europe and Asia did not compensate for the sharp decline in North America.

The bearish stance observed in the nearby contract prices was prolonged during the last week of July. Prices plunged and reached a five-month low on both markets settling at US$2,119 /tonne in London and US$2,157 in New York by the last trading session of the month under review as a result of adequate weather conditions observed in the majority of West African cocoa producing regions.

As shown in Chart II, the US dollar index remained stable in July whereas the ICCO daily price index retreated by 12% from its value displayed at the beginning of the month. Thus, the exchange rate market did not play any role in this price development. 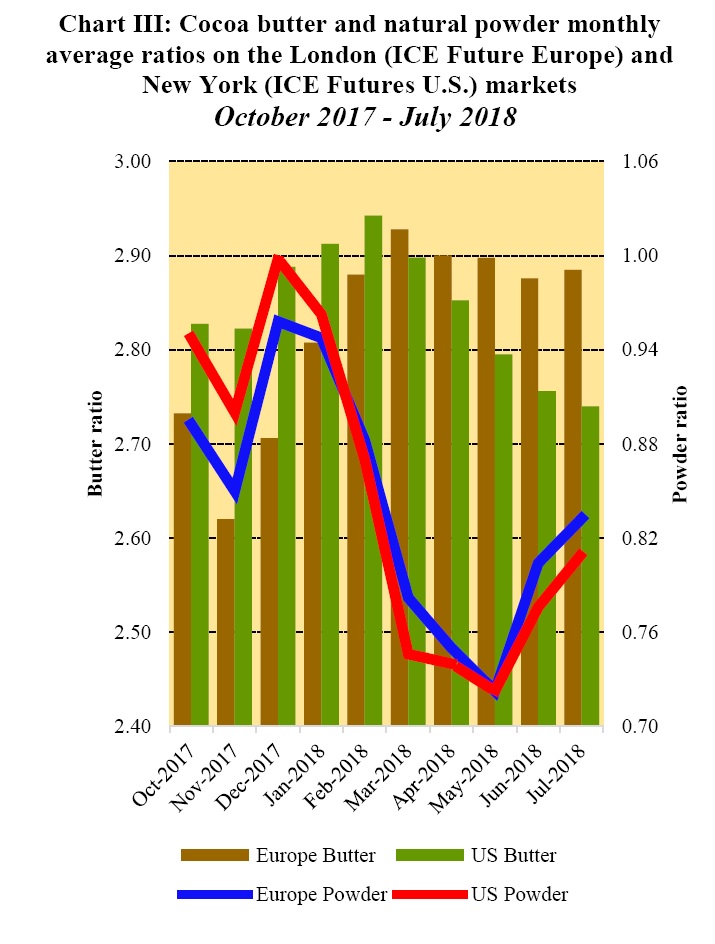 As a main factor impacting price movements described in the previous section of this document, cocoa beans supply continues to maintain a high level in top producing countries.

Indeed, at the time of writing, the cumulative arrivals of cocoa in the Ivorian main ports stood at 1.831 million tonnes, down from 1.966 million tonnes recorded during the same period last season.

However, processing activities dipped in North America during the second quarter of 2018 according to the National Confectioners’ Association recent report, showing a recession (-3.11%) in grindings activities.

Moreover, processors’ margins continue to influence grindings levels. As depicted in Chart III, the cocoa butter ratio has followed an upbeat trend since the beginning of the 2017/18 crop year on the European market.

This bullish stance in butter ratios indicates increasing margins drawn by European processors from grindings activities as a result of low international prices of cocoa beans.

On the other hand, the US market provided higher processing margins from October 2017 to February 2018 with the trend reverting since March 2018.

The high premium on New York cocoa futures which made it less attractive to buy cocoa beans in the United States contributed to the low processing activities.

Weather in Central America, possible damages to coffee crops push up a...

7-Eleven gets in the holiday spirit with launch of Candy Cane flavored...