ABIDJAN, Côte d’Ivoire – This review of the cocoa market situation focuses on the prices of the July-2020 (JUL-20) and September-2020 (SEP20) futures contracts listed on ICE Futures Europe (London) and ICE Futures U.S. (New York) during the month of July 2020. It aims to highlight key insights on expected market developments and the effect of the exchange rate on the US-denominated prices of the said contracts.

Finally, Figure 3 presents monthly averages of cocoa butter and powder prices in Europe and the United States since the start of the 2019/20 crop year 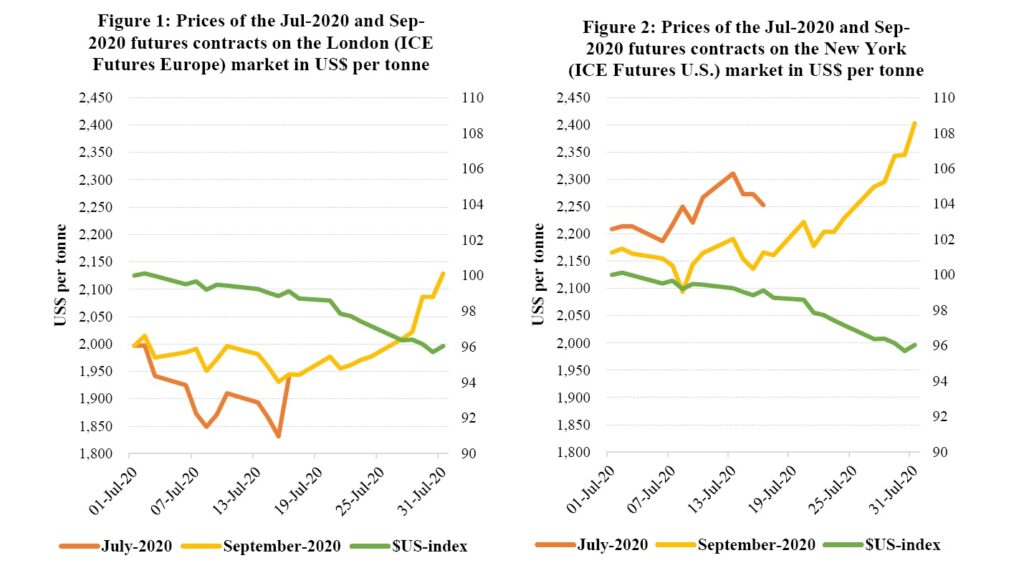 While approaching the maturity date (16 July 2020) of the JUL-20 contract, the London market was in contango whereas New York was in backwardation. Indeed, the JUL-20 contract priced with an average discount of US$67 per tonne over the SEP-20 contract in London while in New York, a premium of US$87 per tonne was established between prices of these futures contacts.

The recorded rise in prices was driven by various factors. On the one hand, there was a 4% depreciation of the US dollar. As a result, the US-dollar denominated cocoa prices were expected to increase by this same magnitude ceteris paribus.

On the other hand, as compared to last season levels, tighter arrivals were recorded in Côte d’Ivoire, Ghana and Nigeria. Moreover, in the course of the investigated month, certified stocks of cocoa beans in European warehouses declined by 14% year-on-year to 117,453 tonnes.

At the same time in the United States, certified stocks of cocoa beans drastically collapsed by 41% to 6,961 tonnes.

At the end of July, cocoa arrivals in Côte d’Ivoire and Ghana remained lower compared to levels attained one year ago. Indeed, as at 3 August 2020, cumulative cocoa arrivals at Ivorian ports, since the 2019/20 season started, were established at 2.043 million tonnes, down by 5.4% from the 2.160 million tonnes reached during the same period in the previous season.

In Ghana, the Ghana Cocoa Board (COCOBOD) reported that during the period 1 October 2019 – 4 June 2020, cocoa purchases amounted to 742,725 tonnes. This represents a 4.3% drop from the volumes bought over the same period of the previous season.

On the demand side, a bearish stance was seen in the second quarter of 2020 grindings figures published by the main regional cocoa associations. Indeed, the European Cocoa Association (ECA) released data showing a year-on-year decrease of 8.9% to 314,108 tonnes in grindings while the Cocoa Association of Asia (CAA) announced a decline of almost 6% to 202,674 tonnes year-on-year.

In the same vein, processing activities weakened in North America during the second quarter of 2020 with the National Confectioners’ Association (NCA) reporting a 10.7% reduction to 110,776 tonnes of cocoa beans grinded.

At the end of August, the ICCO Secretariat will release its revised crop and grindings forecasts for the current cocoa year in its Quarterly Bulletin of Cocoa Statistics.