ABIDJAN, Côte d’Ivoire — This review of the cocoa market situation reports on the prices of the nearby futures contracts listed on ICE Futures Europe (London) and ICE Futures U.S. (New York) during the month of August 2019. It aims to highlight key insights on expected market developments and the effect of the exchange rates on the US-denominated prices.

Finally, Chart III illustrates monthly averages of cocoa butter and powder prices in Europe and the United States since January 2019. 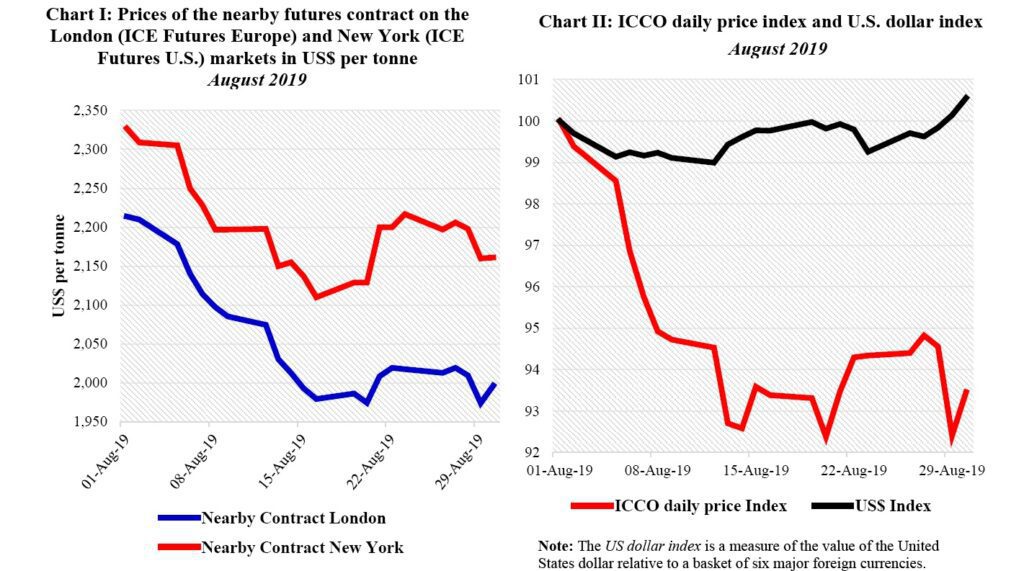 As delineated in Chart I the front month cocoa futures contracts prices sagged considerably on both the London and New York markets during August This downward trend was an after effect of expectations that the global cocoa market is bracing itself for another supply excess for the current cocoa season.

The dynamic of the nearby cocoa futures contract prices highlighted three major stages on both the London and New York markets during the month under review. Over the period 1-16 August prices followed a downward trend as the conducive meteorological conditions observed in Côte d’Ivoire’s major cocoa producing areas led market participants to reinforce their perception of a stronger global production.

During this period, data posted by the Intercontinental Exchange (indicated that, certified stocks of cocoa beans in its licensed warehouses slightly reduced from 129,730 tonnes to 129,470 tonnes in Europe whereas in the United States, these stocks shrank from 266,090 tonnes to 263,083 tonnes.

The US dollar index remained broadly flat while the ICCO daily price index plummeted by 7 over the analysis period Chart II Therefore the deterioration seen in cocoa prices was mainly attributable to market fundamentals and other factors rather than currency fluctuations. 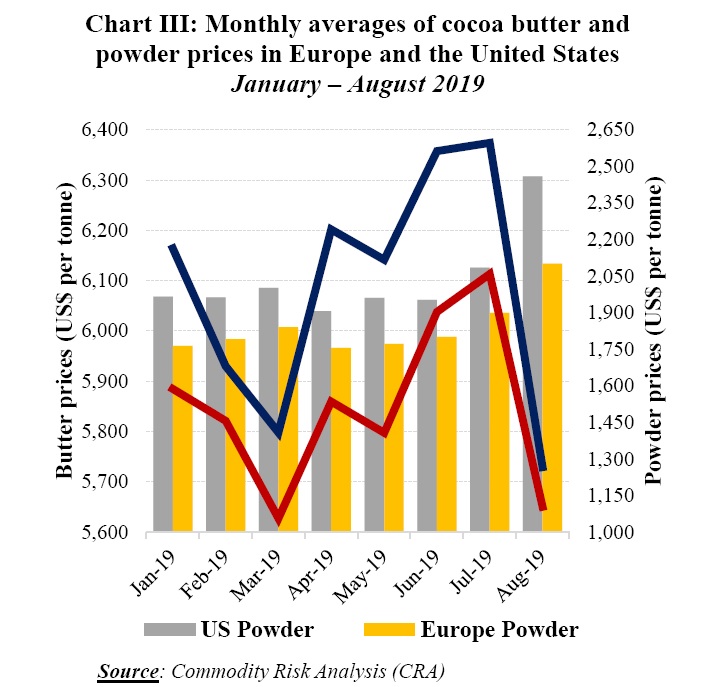 The 2018/19 cocoa year is drawing to a close with the prospect of another global supply excess. As at 21 August 2019, cumulative cocoa arrivals at Ivorian ports since the beginning of the season were estimated at 2.135 million tonnes, up by 12 from the 1. 9 13 million tonnes recorded during the same period of the previous season.

At the same time, data posted by the Ivoirian coffee and cocoa sect or regulator Conseil du Café Cacao showed that, during the period October 2018 June 2019, cocoa processing activities in the country expanded by 6 to 4 37 ,0 79 tonnes as compared to the 412,981 tonnes reached during the same period of the previous season.

Cameroon has witnessed an increase in both production and grindings with estimate s of 270 000 and 60,000 tonnes respectively anticipate d for the 2018/19 season. Additionally, Cameroonian officials announced on 14 August 2019 that grindings in the country are anticipated to double to 120,000 tonnes during the 2019/20 season due to recent and upcoming investments to expand the country’s processing capacities.