ABIDJAN, Côte d’Ivoire – Grindings data published by the main regional cocoa associations for the first quarter of the 2021/22 cocoa year signalled that cocoa demand for the season started on a strong note, reports the ICCO in its monthly market report. Thanks to progress in vaccinations despite the COVID-19 pandemic lingering on, economies have opened up and boosted consumer demand for most commodities including cocoa.

Moreover, the oversupply and ample stocks of cocoa beans in the preceding year made cocoa beans relatively affordable, and this may have supported manufacturers’ cost of production and consequently increased cocoa processing activities.

The increase in year-on-year quarterly grindings appears more significant due to a comparison against a weak Q4.2020. As presented in Figure 1, the European Cocoa Association (ECA) posted data indicating a year-on-year expansion of 6.3% from 344,151 tonnes to 365,826 tonnes in grindings.

This decrease in grindings for North America caught market participants by surprise as earlier reports outlined that confectionery sales in the United States had increased over the fourth quarter of 2021. It should be noted that the number of plants reporting their grindings data to the NCA was reduced from 17 in Q4.2020 to 16 during Q4.2021.

However, it is still unknown whether the reduction in the number of reporting grinders in North America is the sole factor that contributed to the observed reduction in the region’s grindings during Q4.2021.

It is noteworthy that, during the first quarter of the 2020/21 cocoa season, a year-on-year decline was observed in grindings for both Europe and South-East Asia while on the contrary, an increase was recorded in grindings for North America.

In the midst of the COVID-19 pandemic, grindings for the fourth quarter of 2020/21 were found to be better than expected in North America and South-East Asia, while cocoa processing activities in Europe were seen at a lower-than-anticipated level in Q4.2020. 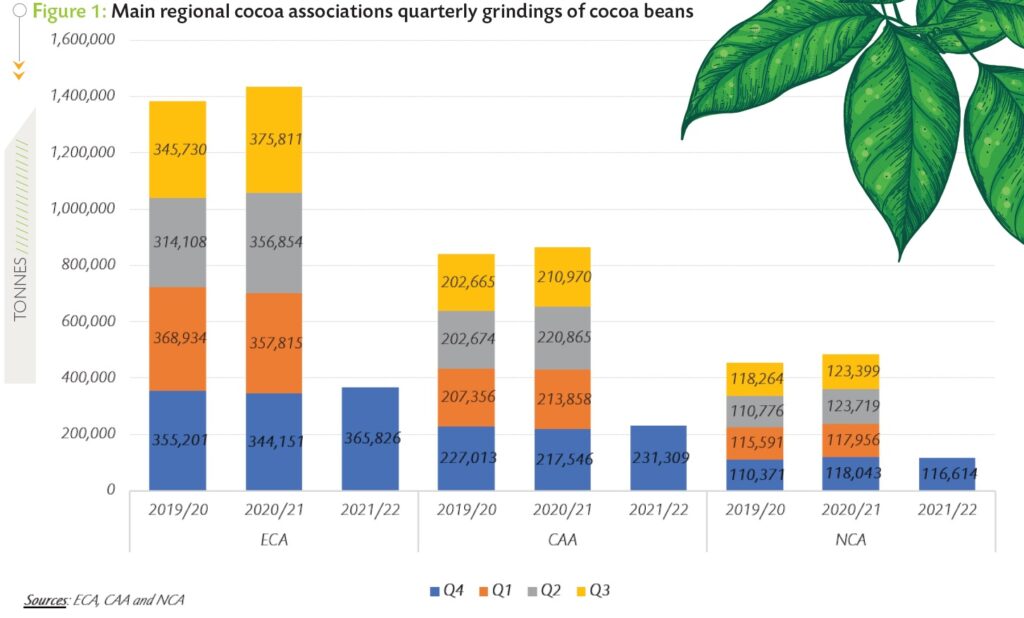 Output from Côte d’Ivoire and Ghana currently following opposite trends

Cocoa production in Côte d’Ivoire since the start of the 2021/22 cocoa year is reported to have overtaken last season’s level at 1.340 million tonnes as at 30 January, slightly up by 1.5% compared with the 1.320 million tonnes recorded at the same period of the 2020/21 season.

Despite this year-over-year increase in arrivals at Ivorian ports, the current meteorological conditions indicate that a drier weather, which will likely reduce the good soil moisture, is prevailing in the country’s main cocoa growing areas and thereby raising concerns over the size and quality of the crop scheduled later on for the season.

This abrupt year-on-year dip in the Ghanaian purchases was to some extent supported by disruptions in the haulage of dried fermented cocoa in the Ashanti region, the second largest cocoa producing area with approximately 22% of the purchases just behind the Western region, representing around 44% of cocoa purchases in Ghana. Similar to neighbouring Côte d’Ivoire, a lack of rainfall coupled with dry winds is also currently being experienced. 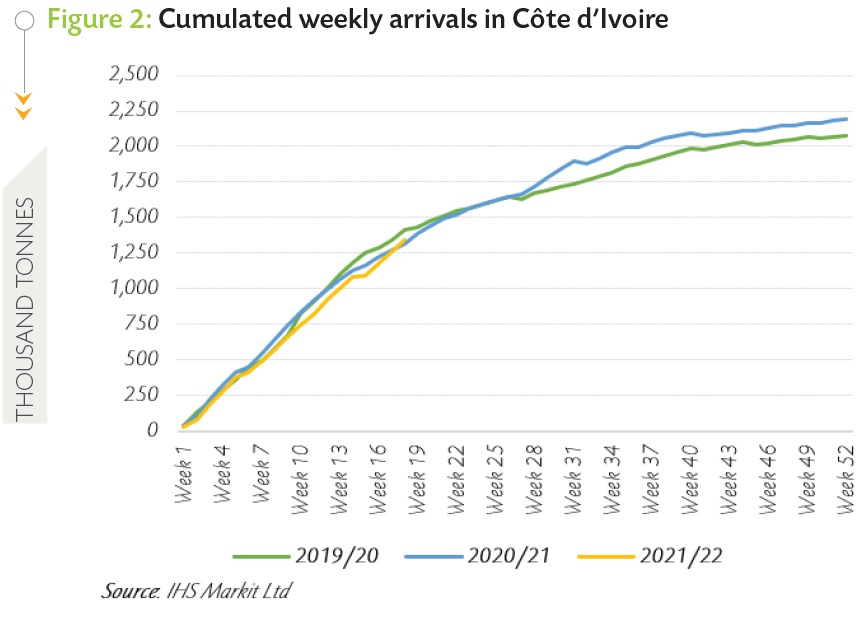 During January 2022, prices of the front-month cocoa futures contract oscillated between US$2,238 and US$2,428 per tonne in London and averaged US$2,324 per tonne, slightly lower compared to the average price of US$2,343 per tonne for the nearby contract recorded at the same period of the 2020/21 cocoa year.

In New York, the average price of the MAR-22 contract settled at US$2,547 per tonne, up from US$2,528 per tonne recorded in January 2021 and ranged between US$2,420 and US$2,663 per tonne. Figure 3 shows price movements of the first and second positions on the London and New York futures markets respectively at the London closing time in January 2022, while Figure 4 presents similar information for the previous year. 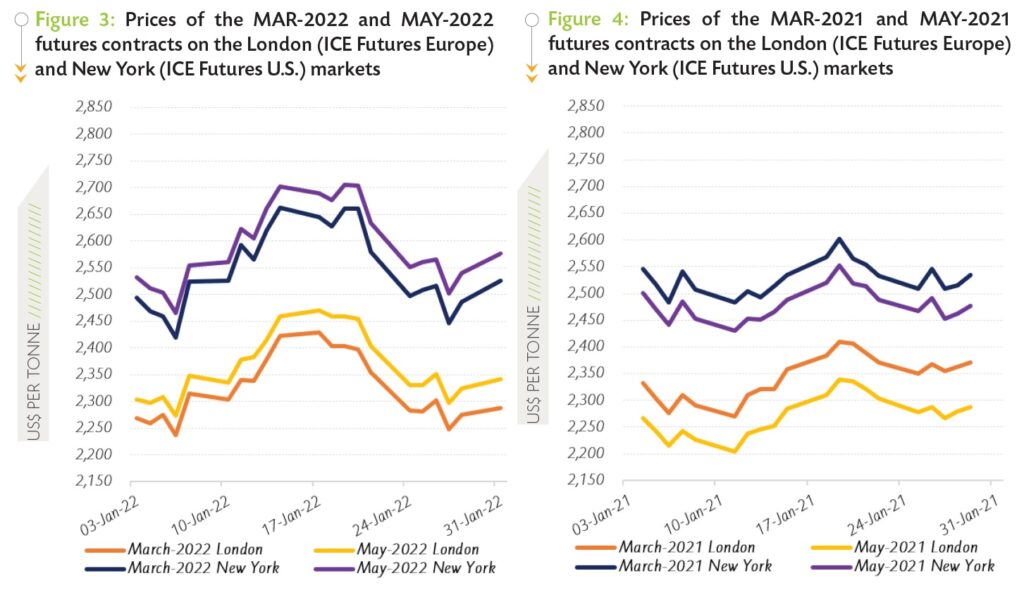 Figure 3 shows that both the London and New York markets were in contango during January 2022 with the MAR-22 contract pricing at an average discount of US$43 per tonne compared to the MAY-22 contract in London.

Concurrently in New York, prices of the first position of cocoa futures contract were lower on average by US$44 per tonne compared to prices of the second position contract. Under normal market conditions, futures contracts with later expiries are more expensive due to various extra cost of carry factored into their prices.

A year ago (January 2021), the situation was different on both sides of the Atlantic. Indeed, price configurations as presented in Figure 4 indicate that the nearby contract (MAR-21) traded higher compared to the deferred one (MAY-21) on both markets, with an incentive of US$49 per tonne in London and a premium of US$72 per tonne in New York.

The higher premium witnessed in New York can be attributed to the low cocoa inventories recorded at the time.

Despite the initial decrease recorded at the beginning of January, prices of the front-month cocoa futures contract followed an upward trend on both sides of the Atlantic over the first thirteen trading days of the month under analysis, reaching a 4-month high at US$2,428 per tonne and US$2,663 per tonne in London and New York respectively.

At the time, the global market was bracing itself for a substantial increase in grindings for most traditional cocoa consuming regions while arrivals in Côte d’Ivoire and purchases of cocoa in Ghana were lagging behind levels recorded during the corresponding period of the previous season.

During this interval, cumulative arrivals in Côte d’Ivoire since the start of the 2021/22 cocoa year were reported to have overtaken levels recorded at the same period of the previous season.