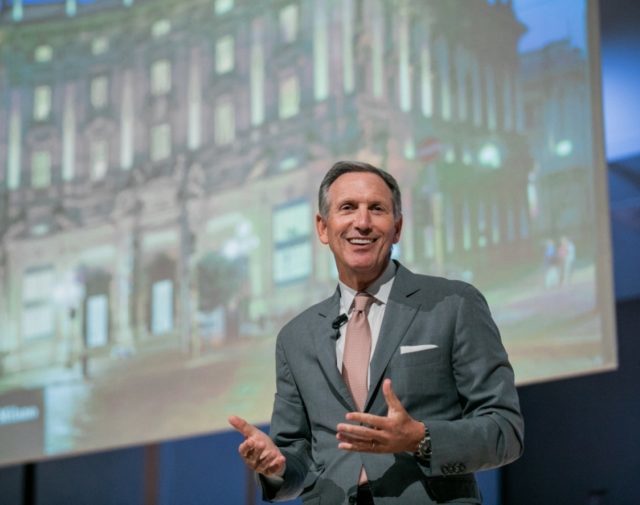 MILAN – Starbucks visionary Howard Schultz shared entrepreneurial wisdom and stories from his life and career with business students at Bocconi University in Milan on Tuesday evening.

Build a currency of trust. Not every decision, small or large, is an economic one. Business is a team sport.

“And last, if I took you to where I grew up in public housing, in a place that’s very, very far away from here, and we took a picture of that place, and you asked the question, ‘What are the odds of getting from there to here?’ – the odds are insurmountable, but it can happen,” Schultz said.

“I’m living proof it can happen. And I’m here today to tell you I believe it can happen for you. But it’s not an easy climb, and there’s great sacrifice involved in trying to maintain your entrepreneurial vision and dream.”

Schultz spoke for more than an hour and took questions from the packed auditorium of Bocconi MBA and master of science students beginning their school year at the private university, sharing stories from his life and career and lessons for building a successful entrepreneurial mindset.

“How many of you know that Starbucks is opening our first store in Italy on Friday?” Schultz said after taking the stage in front of a large photo of the new Starbucks Reserve Roastery in Milan. Nearly all the students in the auditorium raised their hands.

In many ways, Schultz told the students, when the Roastery opens its doors and begins serving customers on Friday, it will represent a full-circle moment, both for Starbucks, and for him personally. His first trip to Italy in 1983 changed everything, he said.

“I walked the streets of Milan and I was captivated, seduced, intoxicated by Italian coffee bars. There are 1,500 alone in the city of Milan alone, and they just swept me away,” Schultz said. “I rushed back to America with a great idea to replicate in United States, and everyone thought I was crazy.”

Schultz, who was then 30, had joined Starbucks the year before, when the company had just four stores and only sold whole-bean coffee to brew at home. He returned to Seattle with a vision of bringing the Italian coffee culture to the United States.

After leaving Starbucks for a short time to start his own II Giornale coffeehouses, he purchased six Starbucks stores and roasting facilities in 1987 with the help of local investors, with a dream of someday having 100 stores across the country. And it wasn’t just building Italian-style espresso bars across America he was trying to sell to potential investors, it was a different kind of for-profit company entirely.

“Literally we had this dream to try to create a company that would try and achieve the fragile balance between profit and conscience,” Schultz said. “But what I really mean by that is the need to understand the role and responsibility of a company … is much greater than ever before in terms of its responsibility to its employees and the communities it serves.”

That company now has more than 29,000 stores and 360,000 employees worldwide and offers its employees benefits, often considered “unorthodox” for a retail employer, such as education, profit-sharing and healthcare.

“Success is best when it’s shared”

“When we gave equity to people with Bean Stock we started calling them not employees, or associates, but partners,” Schultz said. “Success is best when it’s shared.”

The Roastery in Milan is an homage to the Italian coffee culture that inspired Schultz. It’s also a celebration of the art and science of coffee Starbucks has worked for years to develop. Located in a historic former post office on the bustling Palazzo della Poste along Piazza Cordusio, it’s just a few blocks away from some of Milan’s most famous cultural and postcard-inspiring landmarks – the Duomo di Milano, Galleria Vittorio Emanuele II and Teatro alla Scala.

Milan is the third Starbucks Reserve Roastery in the world; the Seattle Roastery opened in 2014, and Shanghai in 2017.

“Seriously, when you do visit the Roastery, I don’t think there’s a retail store in the world … that has created the atmosphere and expression in terms of the experience and what you will see and feel,” he said.

Culture over strategy. Play the long game. Be vulnerable. Lead with your heart.

“And don’t let anyone, even your mom and dad, tell you that your dreams cannot come true,” Schultz said. “They can, but success is not an entitlement. It has to be earned every day.”

Schultz told the students that back in 1983, when he first returned from Italy, he was looking for investors for his dream to bring Italian coffee culture to America. In the beginning, he faced a lot of rejection.

One day, his wife Sheri’s father asked him to take a walk. They sat on a park bench, and his father-in-law told him, “Listen, I love what you’re trying to do, but my daughter is eight months pregnant, and she’s still working, and you have a hobby. I respect you, I really do, but it’s time to get a job.”

Schultz said he was crushed. He cried, he was so embarrassed. He went home and didn’t mention the conversation until later. At that moment, she could have told him her father was right. But she didn’t.

“She said, ‘My father had no right to tell you that. We’re going to see this through.’ The good lesson there is marry the right partner,” Schultz said, inspiring laughs and extended applause from the students. Also, you can get discouraged, but don’t stop, he said.

When someone helps you, pay it forward. Don’t take shortcuts. Be engaged in your community and country.

Schultz took questions from students, many of whom were wondering about how to persevere in the face of rejection, how to stay focused on customer experience with such a large company, and future market trends and consumer behaviors. One student asked how Starbucks is tackling sustainability.

Schultz cited the company’s recent announcement about finding an alternative to plastic straws by 2020 and its efforts to create sustainable, rust-proof coffee trees in Costa Rica and share them with all farmers, whether they grow coffee for Starbucks or not.

“Our intention is to use our scale for good, and to do everything we can to be the kind of company that has best practices in everything we do,” Schultz said. “A customer today buys a product or a service based not only on price or convenience, but many customers want to support a company whose values are compatible with their own.”

The importance of not embracing the status quo

Success can produce hubris; you have to recognize the importance of not embracing the status quo, even when you are succeeding. Don’t settle. Do things every single day that bring you joy and challenge you and make a difference in the world.

“You’re attending an extraordinary university, and it’s a privilege – it’s a gift. Thousands and thousands of people would love to be in your seat. Millions will not get that opportunity,” Schultz said. “There’s a lot of inequity in the world. With success comes responsibility. We can’t have a world in which we’re leaving millions of people behind. We can’t have a world in which there’s hopelessness and despair for millions of people.”

Schultz encouraged the students, even though they’re attending business school, to think about the role and responsibility of what it means to be a citizen.