Uou can forget about making your morning coffee on the cheap if you live in Hawaii, Alaska, and most of the West Coast. At $7.74 a can, coffee in Honolulu is more expensive than anywhere else in the country, according to data from the Council for Community and Economic Research’s Cost of Living Index— an irony, since Hawaii is the only state that produces coffee on a commercial scale.

According to the research, which looked at the average cost of an 11.5-ounce can of Maxwell House, Hills Brothers, or Folgers coffee in over 300 American cities, the same can of coffee can cost more than $6 in several California cities and $5.72 in Seattle, home of Starbucks.

The contrast is stark between those places and Kalamazoo, Michigan, where a can goes for just $3.18, the lowest price on the list.

What’s the deal? For Alaska and Hawaii, a main factor is geography. Both states are far from the mainland United States, which means shipping costs for food are higher.

For example, Kodiak, Alaska (where coffee is $6.01 a can), is a city on an island, and goods have to be transported there either by plane or boat.

According to Cara Durr, Director of Public Engagement at Food Bank of Alaska, the situation is the same in many parts of the state, especially the most remote regions.

In Barrow, Alaska, the northernmost city in the United States—and a city that was not included in this report—it’s possible to find a can of Hills Brothers coffee for $8.99.

“When you’re talking about shipping food via plane, and sometimes it’s by maybe a cargo or commercial carrier to a hub community and then gets put on a small plane to a village, a lot of those villages have incredibly high food prices—$10 for a gallon of milk, $8 for a box of cereal. Coffee is no exception,” Durr said.

But distance isn’t everything when it comes to prices. Where rents are higher, said Center for Regional Economic Competitiveness project manager Jennie Allison, retailers are more likely to shift costs to consumers.

In Honolulu, the average apartment rent, according to the Council’s research, is $2,934. In Manhattan, where the average rent is a staggering $4,063, a can of coffee costs $6.08.

The price of a can of coffee, however, matters less and less to consumers, as Americans increasingly choose to drink coffee away from their homes, or via single-serve coffee pods.

According to the National Coffee Association, the value of the food service coffee market increased 14.2 percent in the past four years. And according to the Washington Post, more than a third of all coffee spending in the U.S. is on coffee pods. 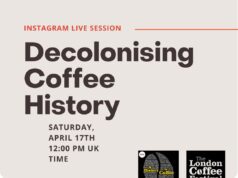