Gus Comstock, the Minnesota legend who drank 85 cups of coffee in a day 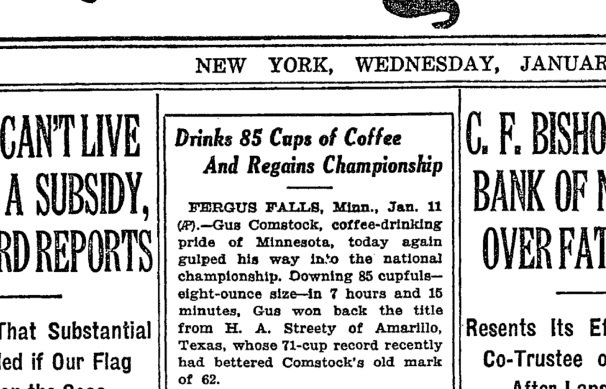 MILAN – A snippet from the New York Times archives tweeted a few years ago in the occasion of the National Coffee Day tells the story of Gus Comstock, a Minnesota man known as the greatest coffee drinker in American history.

Comstock, a military veteran living in Fergus Falls, had bounced around in careers, shining shoes and hawking ice cream and soda pop at county fairs.

He was unfulfilled, this man known for his “large appetites.” He was also in luck: The gilded era after the Great War and before the market crash was a boom time for eating and drinking contests, celebrations of peace and plentiful bounty.

A year earlier, Gus Comstock had obliterated a standing record (27 cups) for coffee consumption, gulping 62 brews in 10 hours. That mark didn’t even last a year, as a 71-cup, under-nine-hour marathon was completed by one H.A. Streety, of Amarillo, Texas.

This, Comstock could not let stand. So, at 7 a.m. on Jan. 11, 1927, he walked into the Kaddatz Hotel with the intent of setting a new world coffee drinking record. Using regular restaurant coffee in 8 ounce cups, Gus downed 15 in the first hour. For each cup consumed, a slip of paper was placed in a sealed box.

Shortly after noon, Dr. Theurer checked Gus and declared him normal except for a slight increase in temperature.

Methodically Gus drank cup after cup until 2:10 p.m. when he stopped. The final count was 85 cups of coffee in six hours.

According to one version of the story, Comstock had his sights set on 100 cups of joe. He fell short of that, but easily smashed Streety’s tally, thus regaining the world record.

His feat was carried in papers throughout the United States and Europe.

He died at the state veterans home in 1955, his legend forever cemented in the annals of java lore.