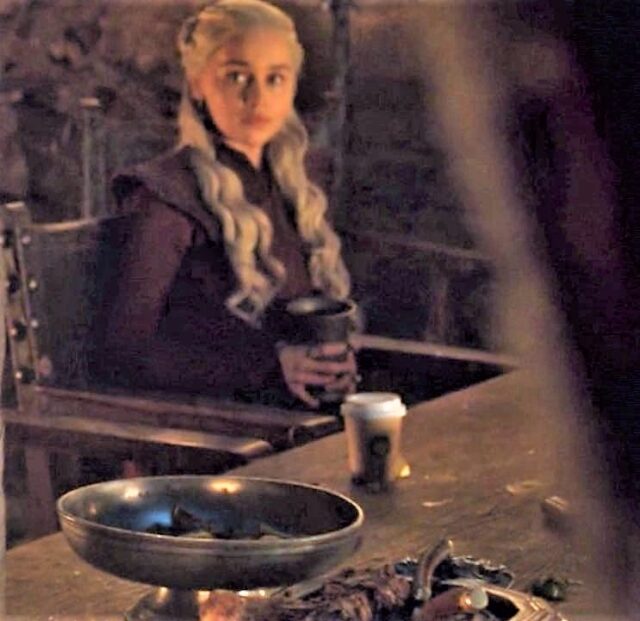 MILAN – HBO made fun of itself after Sunday night’s episode of Game of Thrones caused a huge stir on social media when many fans spotted a paper coffee cup during one of the scenes.

The cardboard coffee cup, resembling the ubiquitous Starbucks containers, can be seen on a table in front of Daenerys Targaryen (Emilia Clarke) seasons 4-8, about 17 minutes into the episode, while the Mother of Dragons carefully watches Jon Snow and Tormund Giantsbane celebrate the victory over the White Walkers.

The out-of-time-and-place cup, which can be seen for about two seconds, was spotted by GoT fans shortly after the episode aired Monday. Fans immediately started mocking the scene with many commenting and posting several memes.

As of Tuesday morning, it was on Twitter’s top 10 trending topics.

“The latte that appeared in the episode was a mistake. Daenerys had ordered an herbal tea,” HBO stated in a press release on Monday.

In an email to Variety, “Game of Thrones” art director Hauke Richter said it’s not uncommon for items to end up misplaced on set, go unnoticed and appear in the final cuts of movies and TV shows.

Richter also confirmed that the cup wasn’t from Starbucks either, but instead purchased from a local coffee shop in Banbridge, Northern Ireland, where the show is filmed.

Images from Game of Thrones season 4 showing Jaime Lannister (Nikolaj Coster-Waldau) holding a coffee cup went viral in 2014, but those were from a behind-the-scenes clip and didn’t appear in the show itself.

Costa closes all its UK shops a few hours before Government’s lo...