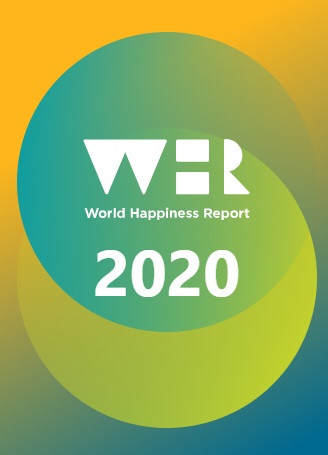 The remaining countries in the top ten are Switzerland, Iceland, Norway, the Netherlands, Sweden, New Zealand, followed by top-10 newcomers Luxembourg and Austria.

“The World Happiness Report has proven to be an indispensable tool for policymakers looking to better understand what makes people happy and thereby to promote the wellbeing of their citizenry,” said Jeffrey Sachs. “Time and again we see the reasons for wellbeing include good social support networks, social trust, honest governments, safe environments, and healthy lives.”

In addition to the country rankings, the World Happiness Report 2020 for the first time ranks cities around the world by their subjective well-being. It may come as no surprise, the happiest city in the world is Helsinki, the capital of Finland. Indeed, the Report shows that in general the happiness ranking of cities is almost identical to that of the countries in which they are located. The report then digs more deeply into how the social, urban and natural environments combine to affect our happiness. Walking in greenspaces makes people happy- but especially so if they are with a friend.

“A happy social environment, whether urban or rural, is one where people feel a sense of belonging, where they trust and enjoy each other and their shared institutions,” said John Helliwell. “There is also more resilience, because shared trust reduces the burden of hardships, and thereby lessens the inequality of well-being.”

Cities clearly play an important role in economic growth and human interaction. As populations continue to move from rural to urban areas further straining resources and infrastructure, understanding sources of happiness becomes that much more vital. Not only does the report take a careful look at how happiness compares between cities globally, it assesses how happy urban dwellers are compared to their counterparts in the same country.

“Generally, we find that the average happiness of city residents is more often than not higher than the average happiness of the general country population, especially in countries at the lower end of economic development,” said Jan-Emmanuel De Neve. “But this urban happiness advantage evaporates and sometimes turns negative for cities in high-income countries, suggesting that the search for happiness may well be more fruitful when looking to live in more rural areas.”

“Right now, more than ever, we should all be conscious about the importance of this work,” says Andrea Illy, chairman of illycaffè, “This year the International Happiness Day should be a chance to remember how much we should care for everyone’s happiness.. This pandemic has found us all unprepared: my wish is that the World Happiness Report and its authors could help rebuild our societies after the emergency due to Coronavirus, with their punctual recommendations.”

The World Happiness Report 2020, which ranks 156 countries by how happy their citizens perceive themselves to be, according to their evaluations of their own lives, was launched today to coincide with World Happiness Day.

The Top 20 happiest countries include:

Four of the six factors used by the report to explain a country’s happiness are different aspects of the social environment. They include having someone to count on, having a sense of freedom to make key life decisions, generosity, and trust. The report looks at how inequality plays in a person’s happiness and how good social environments can help to mitigate the effects of inequality.

“Happiness inequality significantly reduces average life evaluations,” said Richard Layard, “This means that people are happier to live in societies without extreme disparity in the quality of life.”

Other factors within our natural environment play a significant factor in determining happiness. On the national level the report looks at pollution levels, climate and temperatures. In addition, using a more intimate study, 13,000 volunteers in London were asked about their emotional states which was coupled with environmental data. These data ranged from being close to waterways and greenspaces, air quality and noise levels, and weather conditions.

Chapter 2: Social Environments for World Happiness. Helliwell, Huang, Wang & Norton
National rankings of recent life evaluations, and their changes from a 2008-2012 base period to 2017-2019. The sources of these levels and changes are investigated, with the six key factors being supplemented by an analysis of how well-being inequality is linked to lower average levels of happiness. Then the chapter turns to show the importance of social environments with special emphasis on trust and social connections and the ability of high trust to improve life evaluations for all, but especially those who are most at risk by lessening the well-being costs of discrimination, unemployment, illness, and low income.

Chapter 3: Cities and Happiness: A Global Ranking and Analysis. De Neve & Krekel
Provides a ranking of happiness measures, including both life evaluations and measures of positive and negative affect for more than 180 global cities for which there are samples of sufficient size from the Gallup World Poll.

Chapter 4: Urban-Rural Happiness Differentials Across the World. Burger, Morrison, Hendriks & Hoogerbrugge
Relative happiness of urban and rural life around the world, showing city dwellers to be generally happier than rural dwellers in most countries, with these advantages being less, and sometimes reversed, in a number of the richer countries.

Chapter 5: Natural and built environments and happiness Krekel & MacKerron
Examines how different aspects of the natural environment influence subjective well-being. The first part of the chapter does this using natural environmental data for the OECD countries combined with happiness measures from the Gallup World Poll, while the second part uses data collected from on-line reports from a sample of Londoners, seeing how their emotions change with their activities and features of the local environment.

Chapter 6: The SDGs and Human Well-Being. De Neve & Sachs
Studies the empirical relationships between the Sustainable Development Goals (SDGs) and happiness measures from the Gallup World Poll, mainly the life evaluations that are the focus of earlier chapters.