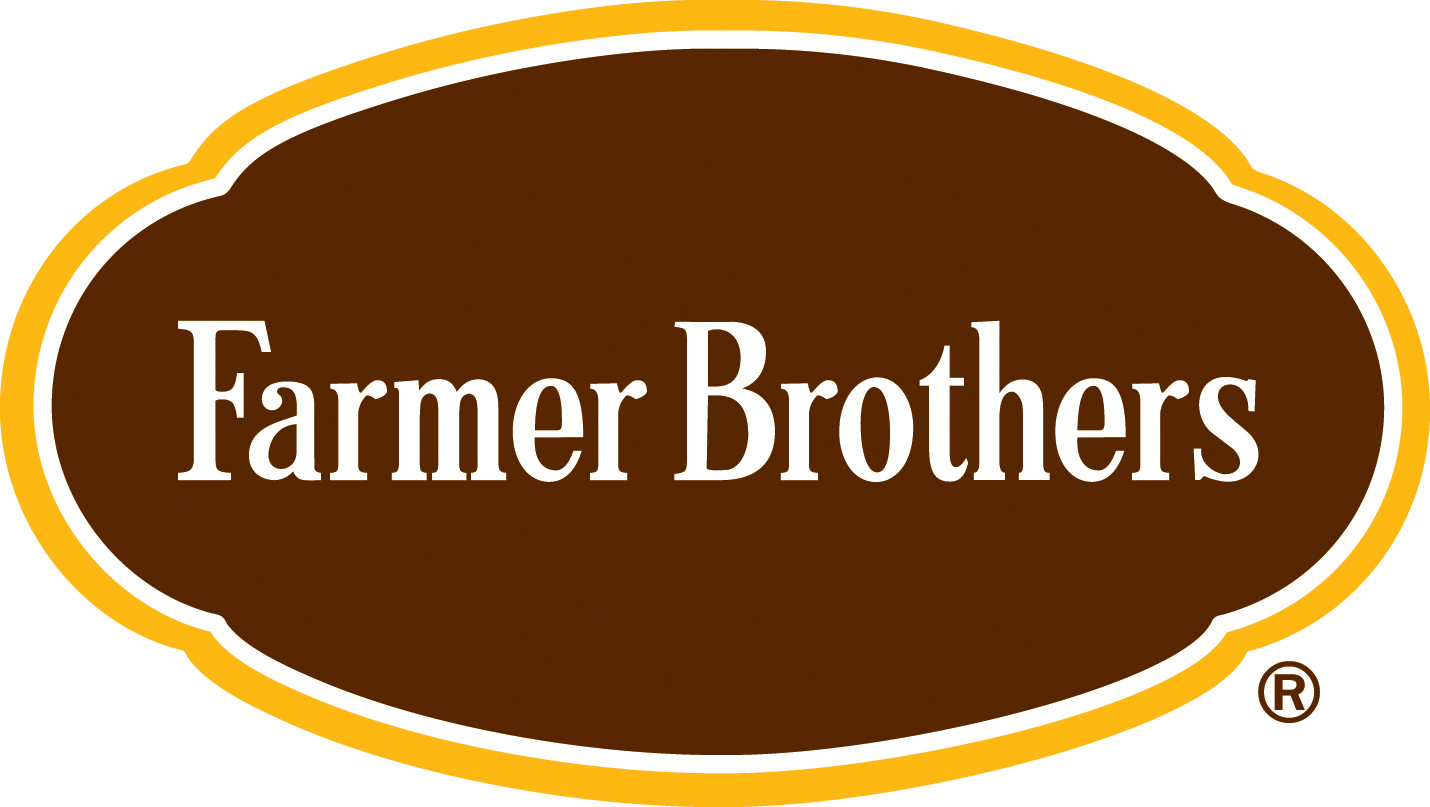 These factors are resulting in continued gross margin expansion and these benefits are beginning to flow through our improved operating cost structure. We experienced our highest DSD volume during the quarter since the onset of COVID, and our DSD sales volumes have continued to trend favorably in recent weeks.

As sales continue to rebound, we’ve been ramping up our inventory, adding roasting capacity, and continuing our optimization efforts across our distribution and production network. While there continue to be lingering challenges associated with the pandemic, we’re excited to see how the business responds as we enter our busy season and look to the balance of the year.”

(*Adjusted EBITDA, a non-GAAP financial measure, is reconciled to its corresponding GAAP measure at the end of this press release.)

The selected financial data presented below under the captions “Income statement data,” “Operating data” and “Other data” summarizes certain performance measures for the three months ended September 30, 2021 and 2020 (unaudited). 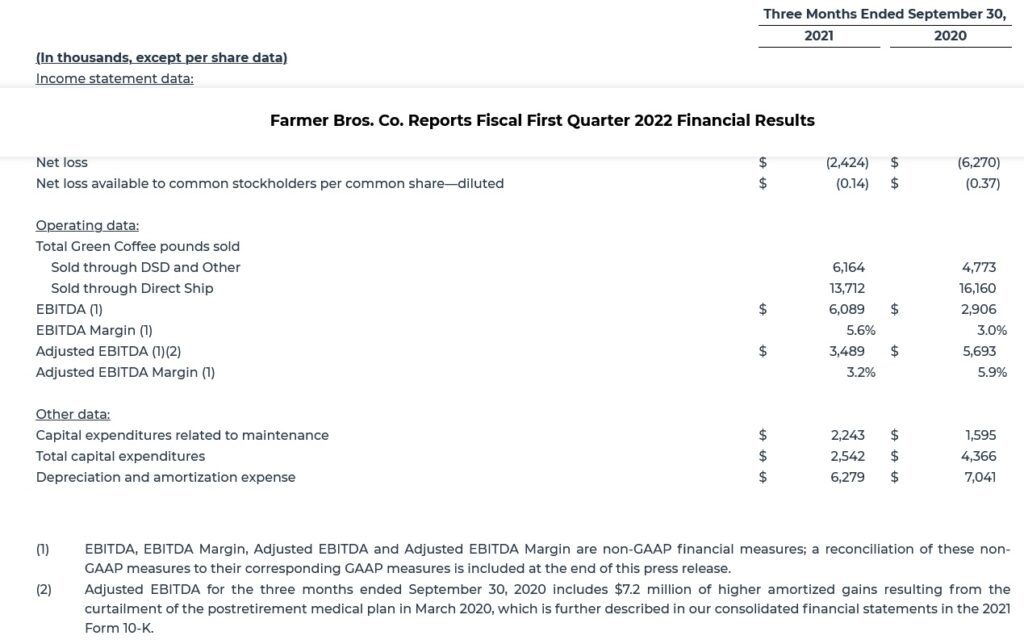 Net sales in the first quarter of fiscal 2022 were $108.4 million, an increase of $11.1 million, or 11.4%, from the prior year period. The increase in net sales was driven primarily by continued recovery from the COVID-19 pandemic as local governments across the country eased restrictions and vaccines were distributed and rolled out successfully. During the quarter ended September 30, 2021, the average weekly DSD sales were down 25% compared to pre-COVID levels, which represents continued improvement from the quarter ended June 30, 2021 and quarter ended September 30, 2020 when sales were down 27% and 41%, respectively. Although we experienced improvement in several markets during the first fiscal quarter, the recovery in certain regions and markets was negatively impacted by the recent increase in COVID-19 cases which caused certain government restrictions to be reimplemented.

The direct ship channel sales declined 5.7% during the three months ended September 30, 2021 compared to the prior year period. This was due to accounts we decided to exit during fiscal 2021 because they resulted in lower or negative profit due to the impacts from COVID-19 on their business. These declines were partially offset by the recovery from the COVID-19 impact of some of the other direct ship customers.

Gross profit in the first quarter of fiscal 2022 was $31.5 million, an increase of $9.1 million, or 40.3% from the prior year gross profit of $22.4 million, and gross margin increased 6.0% to 29.0% compared to 23.0% a year ago. This improvement was mostly due to the effect of the continued recovery from COVID-19 on our DSD channel sales since the DSD channel has higher margins. The increase was also attributable to a decline in the unfavorable production variances and inventory scrap write-downs due to the closure of the aged Houston, Texas plant during fiscal 2021.

Operating expenses in the first quarter of fiscal 2022 decreased $0.6 million, or 1.9%, to $33.2 million, from $33.9 million in the prior year period, and decreased as a percentage of net sales to 30.7% compared to 34.8% in the prior year period. The decrease in operating expenses was driven by a $5.2 million increase in net gains from the sales of assets primarily due to the sale of two branch properties during the quarter ended September 30, 2021. This decline was largely offset by a $2.5 million increase in selling expenses and a $2.1 million increase in general and administrative expenses. The increase in selling expenses was primarily due to variable costs, including payroll, associated with the higher sales volumes, as well as operating costs associated with our new distribution center in Rialto, California. The increase in general and administrative expenses was primarily due to payroll and third party costs related to several supply chain optimization initiatives. The increase in payroll in both selling and general and administrative expenses was predominately due to the return of the 15% temporary decline in base salaries and of the 401(k) cash match suspension that were both cost saving actions implemented in fiscal 2020 due to the COVID-19 pandemic.

Other, net in the three months ended September 30, 2021 decreased by $6.1 million to income of $2.4 million compared to income of $8.6 million in the prior year period. The decrease was primarily a result of lower amortized gains on the terminated postretirement medical benefit plan, partially offset by higher mark-to-market net gains on coffee-related derivative instruments not designated as accounting hedges.

The capital expenditures for the three months ended September 30, 2021 were $2.5 million, a decline of $1.9 million compared to the prior year period. This was due to lower investment spending of $2.5 million for several strategic initiatives completed during fiscal 2021, partially offset by higher maintenance capital spend of $0.6 million compared to the prior year period. The higher maintenance capital was due to coffee brewing equipment purchased for DSD customers as volumes have improved. Several key initiatives, including a focus on refurbished coffee brewing equipment to drive cost savings, have helped reduce purchases as DSD sales volumes return.

As of September 30, 2021, the outstanding principal on the Revolver and Term Loan Credit Facilities was $89.0 million, a decrease of $2.0 million since June 30, 2021. The cash balance decreased by $4.3 million, from $10.3 million as of June 30, 2021, to $6.0 million as of September 30, 2021. These changes were due to higher inventory, as we increased purchases for the peak season during the second fiscal quarter, and payment of the fiscal 2021 employee incentive program. These uses of cash were partially offset by cash proceeds from the sale of two branch properties during the current quarter.

EBITDA, EBITDA Margin, Adjusted EBITDA and Adjusted EBITDA Margin are non-GAAP (U.S. generally accepted accounting principles) financial measures within the meaning of the rules of the Securities and Exchange Commission (“SEC”). See the Non-GAAP Financial Measures section on why the Company believes these supplemental measures are useful, reconciliations to the most directly comparable GAAP measure, and the limitations on the use of these supplemental measures.