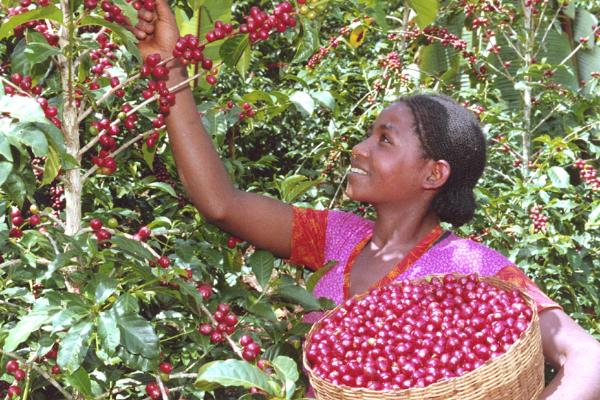 Tesfaye Selidori, a 35-year-old man and a father of 10 children, is among the beneficiaries of World Vision’s coffee revitalization project in Kochere.

Tesfaye witnesses the benefit he has received from the intervention, “Since I joined this project, I have benefitted a lot. In 2008, I received skill training on modern agricultural practice at Fura Agriculture Research Center by the joint support of World Vision and the Government.

In 2009, I received 2,500 high yielding organic coffee varieties from World Vision.” Consequently, both his productivity and income increased tremendously. According to him, “Before joining World Vision, I used to produce 8 quintals of coffee per hectare and sell at 24,000 birr or around USD 1,714 by the then exchange rate. But now, I produce 18 quintals per hectare and sell at 117,000 birr which is around USD 5,850.”

I also bought three horses to transport coffee from farm to home and market and three high yielding varieties of milk cows. In addition, I bought 2 hectares of farmland and this year planted 1,800 organic specialty coffee seedlings. Currently, seven of my children are in school.

I send three of them to Dilla town to enable them acquire quality education. I myself went back to school recently and graduated with 10+3 level diploma. Now, I am planning to plant grinding mill to serve the community and buy a truck to diversify my business.”

World Vision initiated Kochore coffee revitalization project was launched in 2006 with the objective of engaging coffee producing farmers in modern agricultural practice so as to increase their coffee productivity, household income, and ensure sustained livelihood improvement at household level.

The project is operational in 6 Districts of the Gedio Zone, in the Southern Nations, Nationalities and Peoples Region. It embraces 23 Cooperative Unions and benefitted 33,223 households.

Joanna Furgiuele (Coffee Kids): «Covid-19, we will handle this togethe...