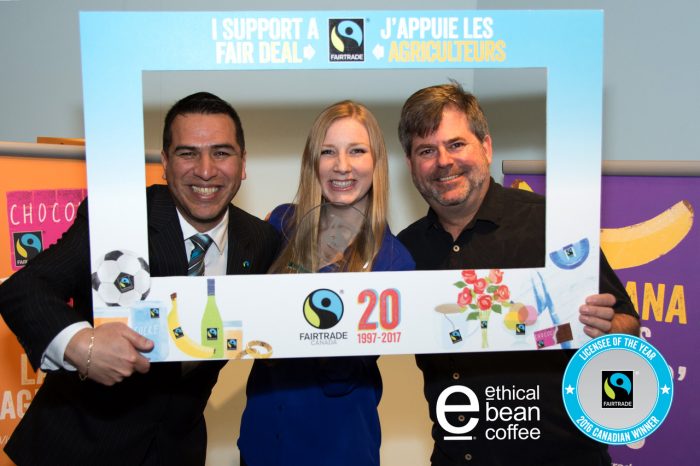 VANCOUVER, Canada – Ethical Bean Coffee was honoured by Fairtrade Canada as Licensee of the Year for its outstanding contribution to Fairtrade systems and certified products, announced February 25 at the Maritime Museum of the Atlantic in Halifax, NS.

There are over 1.65 million farmers and workers in Fairtrade certified producer organizations, many of whom were traditionally marginalized from global trading markets in a variety of ways. Supporting these farmers is critical.

As caretakers of our environment and key players in rural development, farmers are at the core of a healthy planet and a thriving global population.

“In a world where we’re seeing increasing consolidation of our food systems and suppliers, growing global income inequality, and turbulence in our countries and governments, it’s more important than ever that businesses take a leadership role in helping to create a sustainable future,” said Lloyd Bernhardt, Ethical Bean Coffee Co-founder and CEO.

Ethical Bean Coffee worked diligently throughout the year to help grow these Fairtrade communities by adding new products to their offerings, expanding their retail distribution across North America and Internationally, and integrating the Fairtrade message and values into their consumer and marketing communications.

All of Ethical Bean Coffee’s offerings have been 100% Fairtrade and Organic Certified since its inception in 2003. Their coffee has grown into eight unique roast profiles available in whole bean, ground, compostable single serve pods and a variety of foodservice offerings.

Their journey to Guatemala in 1999 to adopt their daughter forever changed their lives, sparking a passion for the culture of the country and inspiring a desire to better the lives of the farmers and families living and working in the coffee industry. The couple returned to Vancouver and in 2003 launched Ethical Bean Coffee.

As a founding Canadian Certified B Corporation, Ethical Bean meets higher standards of social and environmental performance, transparency, and accountability. In action, each bag of Ethical Bean Coffee has a unique QR code where consumers can trace the entire crop to cup journey.

What began as a small operation with one employee has grown into an international success. Through this expansion, Lloyd and Kim have stayed true to their original commitment to make their coffee both just and better.