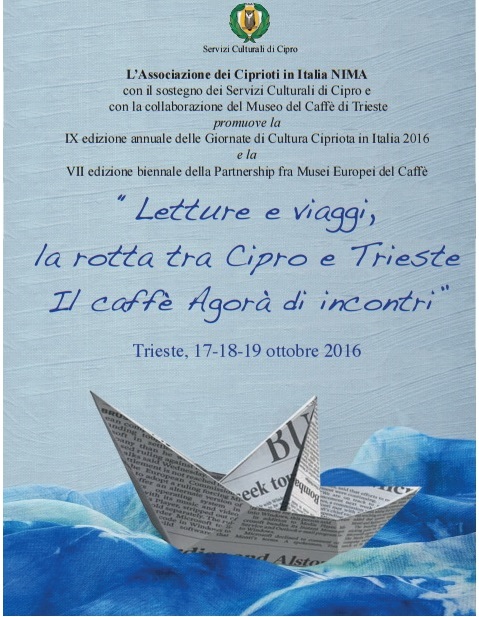 We are speaking about the IX edition of the “Days of the Cypriot Culture in Italy” (Giornate di Cultura Cipriota in Italia), yearly organised by the Association of Cypriot people in Italy NIMA: every year in a different Italian city (the past edition 2015 occurred exactly in Milan), in order to present in a widespread way the Cypriot culture and the cooperative contribution to the Italian society and civilization from the Cypriot community living in the Italian area.

The event has been supported by the Cultural Services of Cyprus Ministry of Education and Culture, under the joint patronage of the Embassy of Cyprus Republic in Italy, the Consiglio Regionale of Friuli Venezia Giulia, the Deryneia and Trieste Municipalities and the Trieste Camera di Commercio.

On its interesting topic “Readings and journeys, the trade route between Cyprus and Trieste. Coffee and Cafés for a melting-pot’s Agora” (Letture e viaggi, la rotta tra Cipro e Trieste. Il caffè Agorà di incontri), the happening took on a particular social and cultural depth in this IX edition.

It has been in fact organized in collaboration with the Coffee Museum of Trieste (which is a part of the Trieste Commercial Museum in Via San Nicolò 7) and it occurured in an Italian town which is deeply devoted, such as Cyprus, to the coffee’s tradition and to mariner and thriving coffee’s trades. Since quite a long time the president of NIMA Association Alexandra Zambà and the curator of the nice Trieste Coffee Museum, Gianni Pistrini, are committed to organize several interesting meetings.

On that occasion the Trieste Coffee Museum will partner the Folk Art & Coffee Museum of Deryneia, a small town located at the east side of Cyprus, just next to the green line dividing de Mediterranean Island and 2 km south of the Turkish-Cypriot district of Famagosta.

The ceremony of Trieste and Deryneia Coffee Museums’ partnership took place on October 18 at 4:00 pm at the Trieste Camera di Commercio in Piazza della Borsa. This partnership joined those biennial ones the dynamic and passionate Gianni Pistrini, expert in the field of the coffee’s topic, has already set up with similar institutions of other European Countries.

Other considerable happenings because of their human, social and multicultural relevance are the friendship exchanges between the “Aghios Stylianos” High School in Nicosia and the “France Prešeren” Slovenian Language High School in Trieste, that hold on October 17 morning at 9:30 a.m. at the Liceo “F. Prešeren” and between the Centro Diurno Diffuso Aurisina-Trieste and the Centro Diurno Boemondo DSM ASL Roma1, with which NIMA Association collaborates, that will occur on October 19 at 10:00 in the Parco di San Giovanni in Trieste.

In the afternoons concerts and readings took place in the charming atmosphere of the historical Trieste Cafés, with the involvement of the Triestiner poets Claudio Grisancich and Sandro Pecchiari: particularly on Monday October 17 at Caffè Tommaseo there was a reading of Triestiner and Cypriot poetry authors; on Tuesday October at Caffè degli Specchi a Concert with Cypriot musics; and on Wednesday October 19 at Caffè San Marco a presentation of the book “Poesie di Frontiera” (Boundary Poems), curator Alexandra Zambà, La Vita Felice publisher, with the involvement of the Centro Diurno Boemondo di Roma which realized that writing work.

Other qualifying participations were the director of the High School “Aghios Stylianos” in Nicosia Alexis Alexandrou, waited together with some of their teachers and students which have been hosted by some Trieste’s coevals, the curator of the Folk Art & Coffee Museum of Deryneia Andros Karagiannis, the director of the “France Prešeren” Slovenian Language High School Loredana Gustin, the director of the Dipartimento Salute Mentale in Trieste Roberto Mezzina, the Centro Diurno Diffuso Aurisina-Trieste manager Giuseppina Ridente, the Centro Diurno Boemondo DSM ASL Roma1 manager Cinzia La Marra, the Presidente of the Associazione Caffè Trieste Fabrizio Polojaz, the FIPE national member Giorgio Quarto, the Trieste University Professor Ettore Campailla.

The “Days of the Cypriot Culture in Italy” 2016 were also supported by the Hellenic Foundation for Culture Italy, the Trieste Greek-Oriental Community, the Trieste Harbour Authority, the Donatori Midollo Osseo (bone marrow donors) Association.