Luis Enrique Navarro, Jr., 22, told said, “When we started this project, the micro mill, we had goals and dreams. I think it’s the conclusion of a project years in the making.”

“God has blessed us. I think the secret, if there is a secret, is to approach coffee with love and passion. Give it your all every day, dedicate yourself to the coffee,” said Navarro, who grew up helping on his family’s farm, which is 1,900 meters above sea level.

Sue Spindler, executive director of the Alliance for Coffee Excellence and founder of Cup of Excellence, told The Tico Times the winning coffee was super-sweet, well balanced, structured and complex.

“That was a blow out coffee, those scores don’t happen everyday,” Spindler observed. The lot from La Mesa came in at 92.67, more than two points higher than the second place lot, which scored 90.03 (click below to read the winning farms). 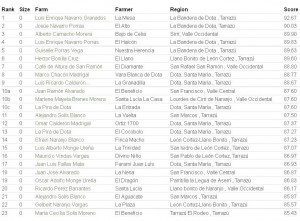 The Cup of Excellence founder highlighted Costa Rica as an innovative coffee producer.

“[Costa Rica] is the micro mill country. They have gone from huge commercial mills to micro mills that are experimenting with varietals, processing, drying, harvesting. We literally had a coffee on the table that I think no one had ever cupped a flavor profile like that before.” The 25 lots that passed on to the international auction will go up for bid on June 24.

Spindler said that the competition, which started in Brazil in 1999, has helped turn the traditional coffee market on its head, allowing producers to develop their own businesses and cut out middlemen by directly trading with buyers from around the world eager for unique and interesting coffees.

“Their lives are never going to be the same again,” she said.