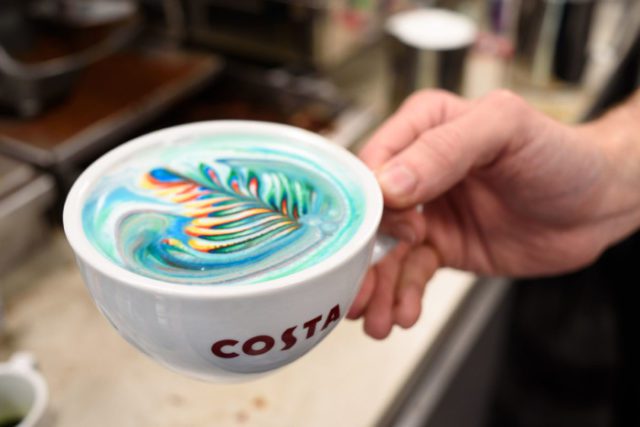 Costa, the nation’s favourite coffee shop, has flown world-class barista and Instagram star, Mason Salisbury 5,000 miles across the world to train their baristas to make Rainbow Flat Whites in selected stores in time for this summer’s Pride celebrations.

Five Costa baristas from across the UK, especially selected for their latte art skills, spent a day learning Mason’s technique of creating rainbow art in the milk poured into a Flat White, ahead of London kicking off their Pride celebrations on 25th June.

The Rainbow Flat Whites will be served in four cities this summer to show Costa’s support for Pride and the LGBT+ community, including London on 25th June, Bristol on 9th July, Brighton on 6th August and Manchester on 27th August.

The Las Vegas barista has become a hit on his social media channel with 25,500 followers thanks to his visually stunning coffees and mesmerising pouring technique.

As an equal opportunities employer, Costa is a founding partner in GLOW (Gay Lesbian Out at Whitbread), which provides a network for the companies’ LGBT+ community as well as straight allies. People from across the whole Costa business – and the parent company Whitbread – from graduates, store teams to senior Directors meet regularly for networking sessions.

We believe that it’s not just our coffee but the people that make Costa so great and Mason definitely shares that mentality. He pours his bright and colourful personality into every cup and we’re so pleased he could share this skill with our baristas.

“Being an open and fair employer is extremely important to Costa: we’re proud to champion equality, diversity and inclusion in the workplace.

We hope to demonstrate our forward-thinking ethos with our Rainbow Flat Whites and will continue to show our support for Pride and the LGBT+ community.”

Mason Salisbury added: “Coffee is my biggest passion, so I was really excited when Costa invited me to come to the UK to show their baristas how to make rainbow coffees.

The baristas were all fast learners, highly skilled and fun to work with, so we had a great time. Pride is such an incredible event and I’m thrilled that my rainbow coffees get to be a part of it.”