Coffee to Go: in search of the best backcountry espresso machines 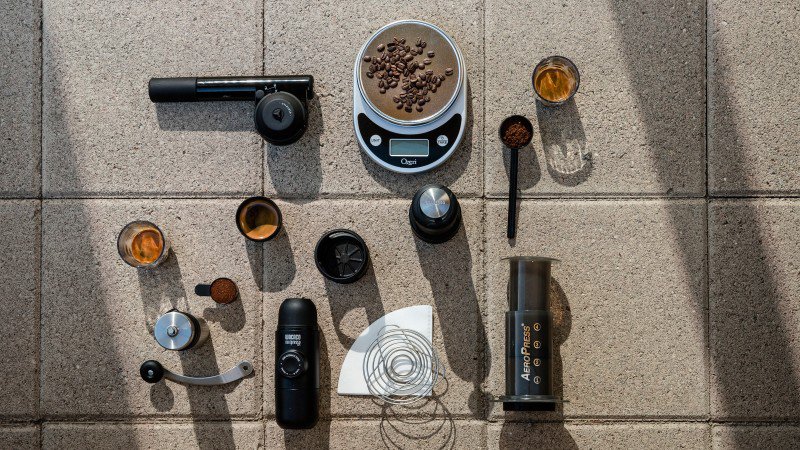 Aaron Gulley that has covered the world from Bali to Namibia for Outside and writes a regular column for the magazine speaks about his real necessity: coffee.

You might think you can close the checkbook and savor the open road once you’ve purchased an Airstream like Artemis, but the truth is the initial investment simply opens up a long list of equipment needs: solar power, anti-sway hitch, generator. The list goes on.

Before all of that, though, Jen and I turned to the real necessity: coffee.

As a caffeine-dependent travel writer who is on the road in places where cafés aren’t always an option, I already have an awesome, super compact daily setup that includes a Porlex Mini burr grinder, a Soto Helix cone, and, when necessary, a Bodum Bistro kettle. The whole kit tucks into a ditty sack smaller than my wash bag, makes crisp clean brews, and has incalculable entertainment value for travel companions. I’ve endured plenty of camp-side ridicule, most of which is deserved, during my fiddly, fastidious 10-ish minute coffee-prep ritual. But I’ve never found anyone who turned down—or didn’t love—the coffee the procedure produces.

That kit was probably the first thing we loaded into Artemis, minus the kettle, as the propane stove takes care of hot water. But if you’re like me, after a few days or a week on drip coffee, you start to crave the brace of an espresso. Of course there’s the classic moka pot, but I wondered: Is there a simple, compact, easy-to-use machine for the woods that generates a proper espresso? Surprisingly, there are quite a few.

First up was the AeroPress ($30), which advertises itself as able to make both “American style” and “espresso style” coffees. That equivocation made me nervous, but I decided to check it out anyway. For a gadget that is “ideal for use when camping, backpacking, boating, or just traveling,” the AeroPress is surprisingly convoluted, with eight separate pieces, and a carrying pouch nearly as big as a regulation-style football.

It’s a fairly simple process: insert a filter and fresh grounds into the chamber, then insert and depress the plunger, which makes a vacuum-like rubber seal in the shaft, to force the water through for a fast extraction. It works well, kind of like a rapid-fire, extra-strong French press, without the bitterness or the grit in your joe. You can vary the strength by the amount of water and the coarseness of the grind, and though the device makes a smooth, intense, short cup, it’s no espresso.

Next I turned to a pair of relative newcomers: the MiniPresso GR ($59) and the Staresso SP-200 ($116). It’s not only the slightly hokey names that unite the two, but their clean designs and similar inner workings. Both use internal reservoirs that you fill with hot water and pop-up hand pumps to generate high pressure that forces the water through the coffee in the sealed internal portafilters. Both produced excellent, smooth espresso with a thick, golden crema.

I leaned toward the MiniPresso, partly because the pill-like design is so sleek and self-contained, with the whole thing, including a the cup, screwing together into a compact unit. The Staresso has three separate parts and a carrying pouch. The MiniPresso also costs half as much.

Unfortunately, both units quickly developed a problem. Because neither has a gauge to meter pressure, it’s difficult to know how much force the pumps can take. While pumping espresso one morning on both units, I pumped through stiff resistance and heard popping noises before water came seeping out of the sides of the devices. The seals inside the chambers had broken.

While waiting for the spares, I got my morning fix from the Handpresso ($100). Reminiscent of a mountain-bike shock pump, this device has a pop-out handle that you use to fill the built-in air chamber before you brew.

A gauge on the head of the unit monitors pressure, with a green dash denoting the desired 16 bar mark. The main body of the unit is solid metal, giving it the highest quality feel of all the devices we tried. Once the Handpresso is pumped up, you fill the circular reservoir with boiling water, insert the grounds-filled portafilter, and screw on the cap.

Then, after stationing the unit over an espresso demitasse (not included), you push the trigger and the pressure releases to create a 30-second espresso pour. Like most countertop machines, the results varied from strong and sweet with a beautiful crema to thin and weak, depending on the grind. With all of these units, you’ll need a hand mill like the Porlex for consistent results, and once I got the grind dialed in, this machine seemed the most reliable.