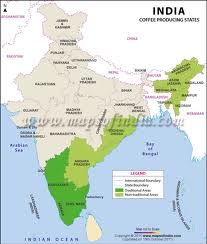 NEW DELHI – Coffee production in the country is expected to increase by 9.05 per cent to 3.47 lakh tonnes in the year 2013-14, on account of normal blossom showers in all major coffee growing areas, according to government data.

The final crop estimate based on crop harvest data for 2012-13 year is placed at 3.18 lakh tonnes, the Coffee Board said in the latest data release.

Karnataka, Kerala and Tamil Nadu are three major coffee producing states, with combined output accounting for 98 per cent of the total output.

Coffee production from non-traditional areas of Andhra Pradesh and Orissa and North Eastern Region for the year 2013-14 is expected to go up by 28.57 per cent to 1,780 tonnes from the final estimate of production in 2012-13.

Every year assessment of crop production is done at the time of blossom period during the month of April-June.

India accounts for about four per cent of world coffee production and exports.