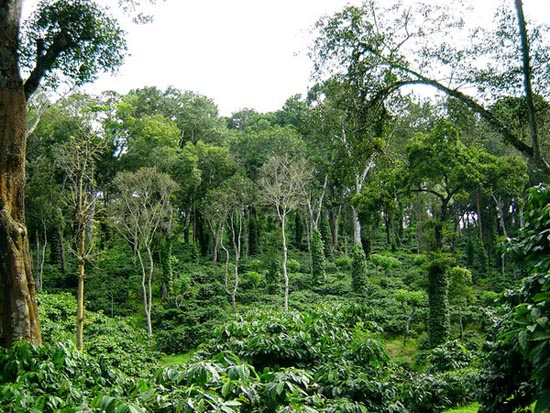 by William Foreman
With the world’s largest coffee-growing regions under threat, two U-M researchers continue poring over better ways to control pests by harnessing the environment instead of compromising it.

John Vandermeer (Ph.D. ’68) touches a tree with hundreds of swarming Azteca ants, and the orangish insects skitter over his index finger, invading the back of his hand. It won’t be long before the bugs start biting, injecting a toxin that burns like tiny red-hot embers hitting your skin.

Before things get nasty, Vandermeer, a professor of Ecology and Evolutionary Biology, gently shakes off the ants and reflects on the role they can play in the massive global industry that produces coffee—the essential day-starting beverage for millions, if not billions, of people worldwide.

“You see a lot of insects that are predators of pests. One particular ant species we noticed is the very aggressive Azteca,” says the bearded professor, wearing a wide-brimmed hat to shield himself from the Mexican sun that’s trying its best to scorch the back of his neck.

The ants protect the plants from the coffee berry borer—the biggest insect threat to the crop across the world. When the Aztecas see the tiny beetles, which eat their way into coffee berries, they scurry over to the beetles, pick them up, and toss them off the plants.

For nearly two decades, the LSA ecologist and his wife and research partner, Ivette Perfecto, have been roaming—and sometimes crawling—around the coffee fields here in the mountains of Mexico’s southern Chiapas state, near the border with Guatemala. They’re trying to understand the complex relationships between the insects and other organisms that live among the lush green plants that grow the bright red berries that eventually help fill our coffee cups.

Few other scientists are researching these things, and Vandermeer and Perfecto are among the founders of the field called agroecology. The big questions the husband-and-wife team is trying to answer are these: Does biodiversity matter and why? How does it affect agriculture? And what kind of impact does farming have on biodiversity?

Citrus trees and other plants are commonly mixed in with the organic shade coffee of the Finca Irlanda farm, which also serves as a refuge for wildlife.

So far, what they have discovered leads them to believe we need to rethink the way we grow our food. Instead of using herbicides, fungicides, and insecticides to wipe out pests, we need to better understand the farm’s ecology—the complex relationship between the plants, insects, fungi, animals, and the land.

Perfecto, a professor in the School of Natural Resources and Environment, said the couple advocates a philosophy of prevention, maintaining biodiversity on the farm with natural enemies that can control the pests, rather than trying to solve a problem with chemicals only after it emerges.

Made in the Shade

The site that Vandermeer and Perfecto have been studying for 17 years is called Finca Irlanda, a 300-hectare (740-acre) farm set in the mountains above the city of Tapachula. It’s believed to be the first certified organic coffee farm in the world.

Driving to the farm involves a perilous one-and-a-half hour journey up a rutted, single-lane road, with plenty of blind curves and slippery switchbacks. Boulders that rest on the side of the road often provide the only barriers keeping vehicles from sliding down the mountain.

Covering the mountainsides are neat rows of coffee trees on terraced plots of land. This type of crop is called “sun coffee,” with farmers growing the beans like corn—a monoculture approach. The advantage is that the plants grow faster and produce more. The disadvantage is the crop is more vulnerable to pests, and the extra exposure to sunlight causes more weeds to grow. So more insecticides, fungicides, and herbicides are needed to protect the coffee.

At Finca Irlanda, it can be hard to spot the coffee fields from a distance. They look more like a forest or nature preserve. That’s because the coffee grows under a canopy of other trees and vegetation. So it’s aptly called “shade coffee.”

Growing coffee this way sometimes results in lower yields. But the upside is that there are fewer weeds because the canopy blocks out the sun, minimizing the undergrowth. It’s also a more biodiverse environment, with a robust mix of plants and creatures that protect the coffee from pests.

(Above) Yellow blotches are a sign that coffee rust is attacking this coffee tree. In the past few years, the disease has become an epidemic in Latin America and the Caribbean. (Below) Ecology and evolutionary biology master’s student Ivan Monagan studies an anole lizard, a native species that preys upon the harmful coffee borer.

“Most of the trees are legumes and add nitrate to the soil,” Vandermeer says. “If you have too much shade, that reduces production. Farmers who have an intermediate amount of shade are the ones who do the best.”

Along with studying Azteca ants, Vandermeer, Perfecto, and their graduate students are researching how agriculture affects the migration of animals. They are also interested in organisms, such as the Mycodiplosis fly larvae and the white halo fungus, that attack coffee rust, which has been devastating the coffee crop in Mexico and Central America.

Coffee rust, or la roya in Spanish, is a plant-choking fungus that creates yellowish splotches on the leaves of coffee plants. The spots contain 100 to 200 spores that will eventually be released, infecting other plants and eventually killing them.

“Two years ago, Guatemala, Costa Rica, and Mexico said the coffee rust outbreak was a national crisis,” Vandermeer says. “A lot of these countries are dependent on coffee, and this thing was destroying their national economies.”

One of the U-M professors’ newest projects involves tracking the spread of coffee rust. Using a felt-tip pen, they painstakingly measure and number the leaves on selected coffee bushes across a 45-hectare (111-acre) plot at Finca Irlanda. This enables them to create a three-dimensional model of the plant on a computer. They monitor the spread of the fungus from leaf to leaf and record the movements on the computer model.

They spend hours observing the plants, enduring the blistering Mexican sun and mosquitos flitting around their faces and ears. Perfecto says such field work is vital.

“These days science relies so much on downloaded datasets that other people collect,” Perfecto says. “People hardly ever go to the field and observe. So one of the main components of our research project here is observing what’s happening in nature.”