This review of the cocoa market situation reports on cocoa price movements on international markets during the month of June 2018. It aims to highlight key insights on expected market developments and the effect of the United States dollar exchange rates on cocoa prices.

Chart I shows the price developments of the nearby cocoa futures contracts on ICE U.S. (New York) and ICE Europe (London) at the London closing time.

Both prices are expressed in US dollars. The London market is pricing at par African origins, whereas the New York market prices at par Southeast Asian origins.

Thus, the London futures price is expected, under the same market conditions, to be higher than that of New York. As a result, the relative price difference provides insights into the relative, expected availability of cocoa beans on these exchanges at the expiry of the futures contract.

Chart II depicts the change in the ICCO daily price Index and the US Dollar Index in June.

Finally, Chart III illustrates the daily differential in the nearby futures contract prices between the London (ICE Future Europe) and New York (ICE Futures U.S.) markets in US$/tonne since the 2017/18 crop year started. 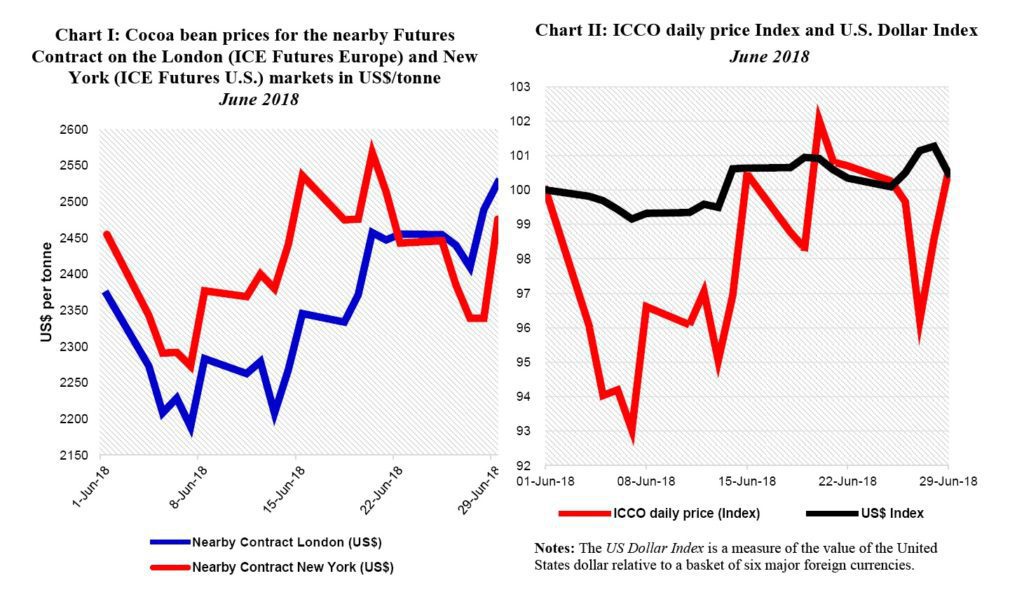 During the first week of June, cocoa prices continued their bearish stance set at the end of May following news of higher weekly arrivals as compared to the previous season. On 8th June, the nearby futures contract settled in London at US$2,189/tonne whereas in New York, it stood at US$2,273/tonne.

Thereafter, prices increased in both markets as a result of concerns on the dry weather conditions in West and Central Africa. Compared to the above-mentioned lows, prices rallied by about 12% in both markets closing at US$2,458/tonne in London and US$2,568/tonne in New York on 20th June.

Nevertheless, this bullish sentiment was short-lived following the report of improved weather conditions. By the end of the third week, the London and New York markets closed at US$2,455/tonne and US$2,443/tonne respectively.

On 27th June, cocoa prices dipped further and stood at US$2,410/tonne in London and US$2,339/tonne in New York as news indicated that adequate weather conditions prevailed in the West African cocoa growing areas.

These losses were later recovered during the last trading sessions of the month when the nearby contract settled at US$2,527 and US$2,476 per tonne in London and New York respectively.

As depicted in Chart II, the US dollar index remained stable in June. As a result, the US dollar did not play any significant role in the above-mentioned developments in cocoa prices.

Indeed, a reduction in the volume of cocoa beans sourced from Ecuador to the US market following the discovery of noxious weeds in shipments has led to a prolonged high-level in premium, drawing more cocoa from West African regions to the US market.

However, the nearby contract priced higher in London compared to New York during the last week of the month.

Reports on the uncertainty of the effects of flooding which occurred in Côte d’Ivoire on cocoa warehouses or cocoa beans transiting through the commercial capital being coupled with worries related to the latest Brexit negotiations supported London prices. 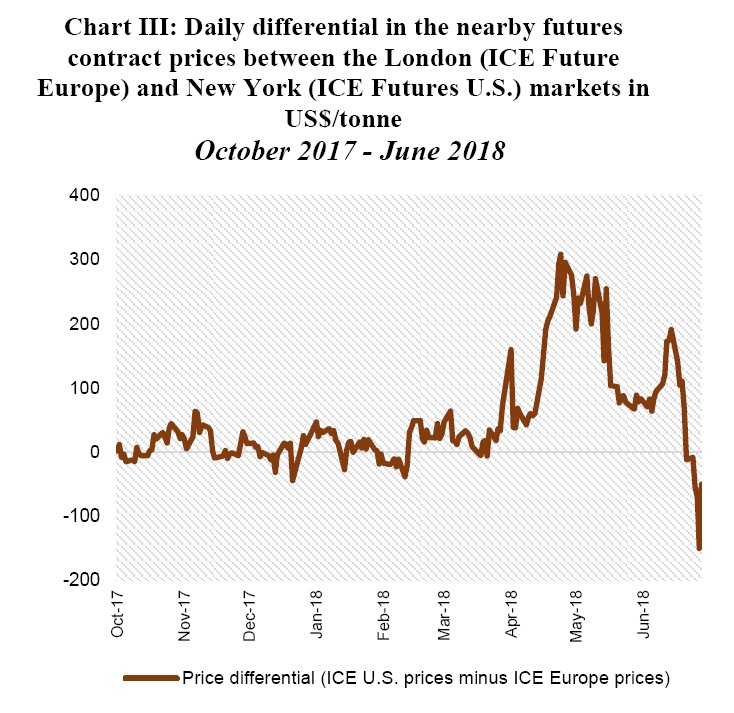 The two top producers, Côte d’Ivoire and Ghana are reportedly working together to decide on the volume and timing of cocoa exports for the 2019/20 season, with the aim of increasing producer profits.

In Ghana, the Cocobod has opened its cocoa light crop purchases with the price paid to farmers unchanged at 7,600 cedis (equivalent to US$1,586 based on prevailing exchange rate) per tonne.

In relation to demand, the market is bracing itself for an increase in grindings for almost all world regions. Regional associations will be releasing their reports indicating grindings levels for April-June 2018 by the middle of July. 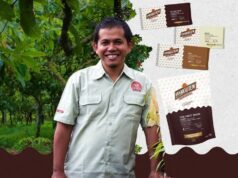