Cocoa market report: London and NY still in backwardation during the month of February

ABIDJAN, Côte d’Ivoire – With the March 2021 (MAR-21) and the May 2021 (MAY-21) futures contracts for cocoa still active in February, the focus for this review remains on these two contracts as listed on ICE Futures Europe (London) and ICE Futures U.S. (New York). Expected key market developments for February 2021 are presented. Figure 1 shows price movements on the London and New York futures markets respectively at the London closing time during February 2021 while Figure 2 presents the same information during February 2020. 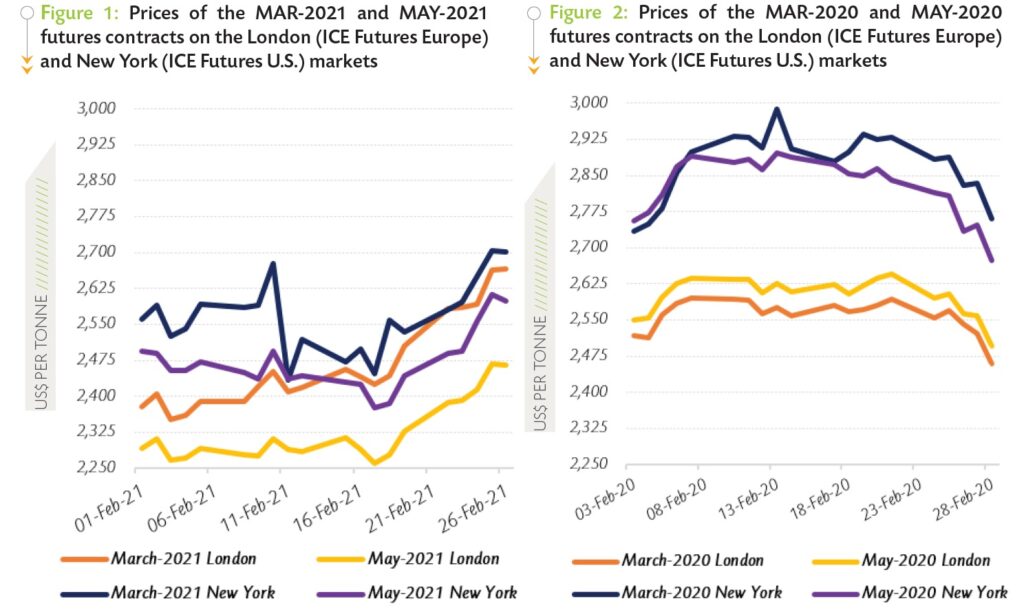 Following the trend set in the preceding month, both the London and New York markets continued to be in backwardation during February 2021. As depicted in Figure 1, the front-month contract (MAR-21) continued to price above MAY-21 on both sides of the Atlantic. The London and New York markets recorded an average premium of US$144 per tonne and US$96 per tonne respectively. It is noteworthy that, a year ago, the two nearest cocoa futures contracts were in contango in London whereas a combination of contango and backwardation was observed in New York (Figure 2).

During the period under review, the nearby contract prices in London averaged US$2,467 per tonne, down by 4% compared with the average price of US$2,560 per tonne for the first position contract recorded during the corresponding period a year ago. In New York, the nearby cocoa contract averaged US$2,568 per tonne in February 2021; representing a 11% plunge compared to US$2,872 per tonne recorded over the same period of the previous crop year.

The global supply excess in addition to a low demand for cocoa products amidst the COVID-19 pandemic maintained cocoa prices at levels lower than observed last season. From the start of the month under review to 17 February, prices of the MAR-21 contract oscillated in London and New York. Prices ranged between US$2,351 and US$2,455 per tonne in London, and between US$2,435 and US$2,678 per tonne in New York.

At the time, favourable meteorological conditions were reported to support production. Furthermore, with the aim of reviving sales, the Ivorian government announced a reduction in the price of their export licences for the 2021/22 cocoa season.

Thereafter, cocoa prices followed an upward trend, thanks to the extension of the global rollout of vaccines and improved prospects of containment of the pandemic, which raised the optimism in the demand for most commodities including cocoa. In reaction to these bullish factors, futures prices soared on both markets, climbing by 9% from US$2,442 to US$2,666 per tonne and by 6% from US$2,385 to US$2,599 per tonne in London and New York respectively.

In London, although stocks with valid certificates increased in February to reach an average of 60,071 tonnes (49% of total stocks) as presented in Figure 3, they remained low compared to their average level of 106,434 tonnes seen a year earlier. 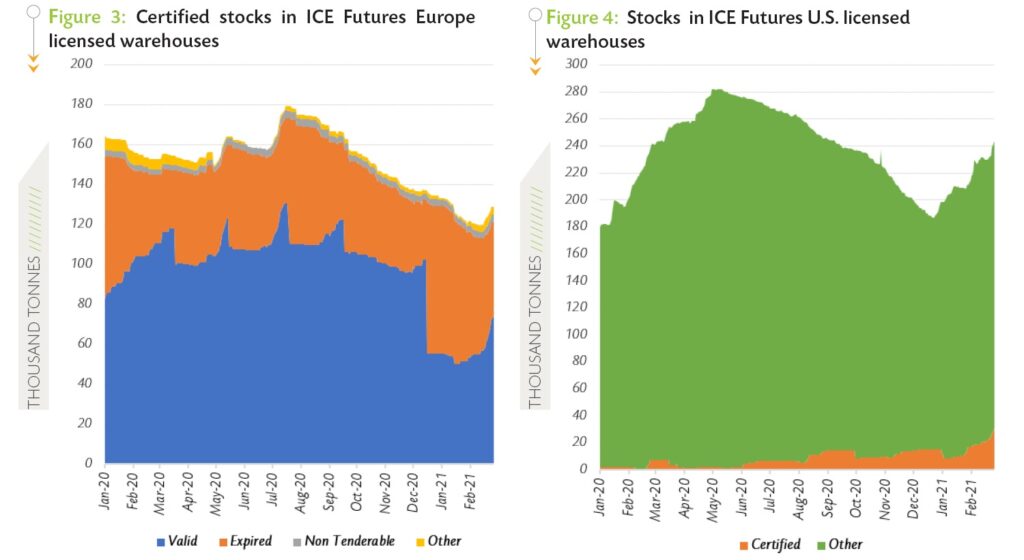 Figure 5 and Figure 6 present the main origins of cocoa graded on the ICE Futures Europe during the periods October 2020 – February 2021 and October 2019 – February 2020 while Figure 7 and Figure 8 show the same information for the U.S.

Cocoa graded by the ICE Futures Europe since the start of the 2020/21 cocoa year reached 35,140 tonnes, down by 43% compared to 62,060 tonnes of cocoa graded over the same period of the previous season. Over the above-mentioned periods, the shares of Cameroonian and Ivorian cocoa beans at exchange gradings decreased from 68% to 59% and 17% to 13% respectively.

On the contrary, the share of Nigerian cocoa beans rose from 12% to 25%, while the gradings share of cocoa from other origins remained flat at 3%.

In contrast, the share of Ivorian cocoa beans at exchange gradings decreased from 75% to 55% while that of Peruvian cocoa moved from 8% to 7%. Additionally, the share of other origins in cocoa beans graded on the ICE Futures U.S. declined from 14% to 7%. 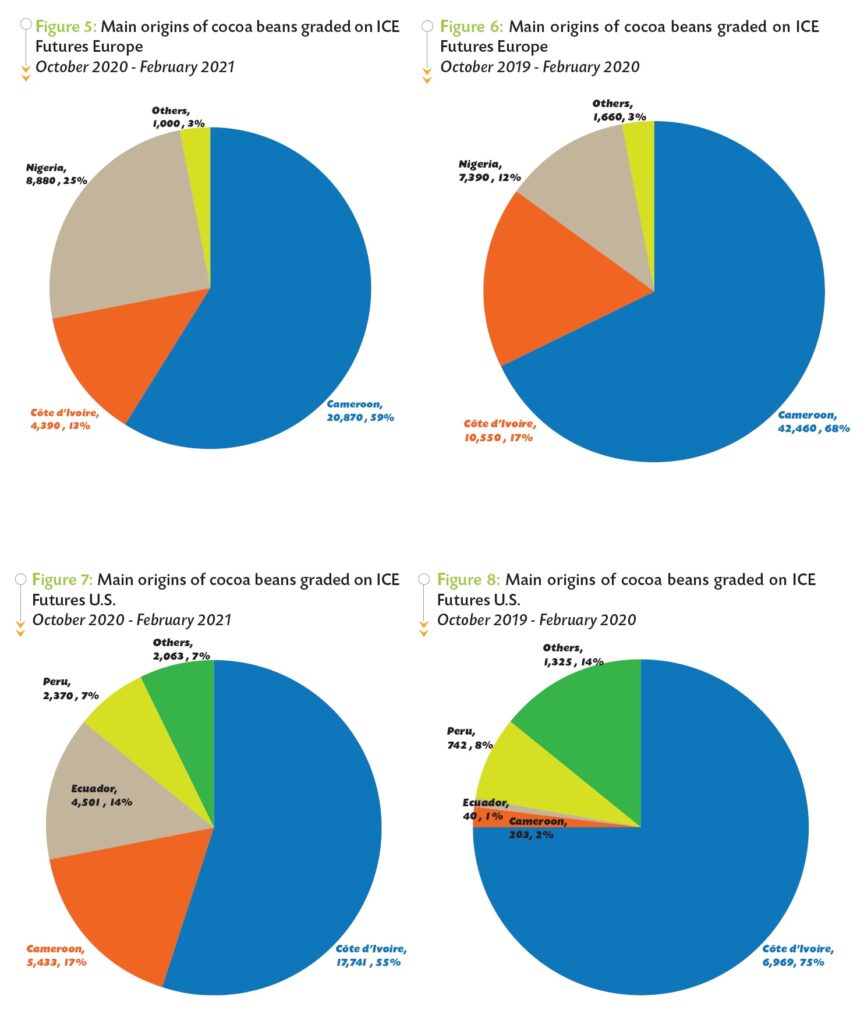 As seen in Figure 9 and Figure 10, origin differentials on prices of the six-month forward cocoa contract in Europe and the U.S. for Ghana, Côte d’Ivoire, Ecuador and Nigeria significantly declined as a result of the persisting weak demand for cocoa. It is worth noting that, differentials in Europe are higher than those in the U.S. because cocoa futures prices on ICE Futures Europe are lower than on ICE Futures US. As an example, the difference in prices of the JUL-21 contract between New York and London averaged US$173 per tonne during February 2021.

Considering the European market, the differential over Ghanaian cocoa stood at US$517 per tonne in February 2021, down by 23% compared to US$672 per tonne recorded in October 2020. Similarly, the origin differential declined by 42% from US$527 to US$308 per tonne for Ivorian cocoa beans.

In February 2021, the U.S. market recorded a country differential of US$514 per tonne against US$614 per tonne during October 2020 for Ghana. Over the same period, the premium applied to Ivorian cocoa beans plummeted by 16% from US$481 to US$404 per tonne. Premiums received for Ecuadorian beans in the U.S. dropped by 20% from US$231 to US$186 per tonne, while a 25% reduction from US$407 to US$305 was seen in origin differential for Nigeria.

As illustrated in Figure 11, prices of cocoa butter and powder generally moved in opposite directions. On the one hand, expectations of increasing demand for cocoa powder sustained price hikes. On the other hand, the dip observed in butter prices was in line with the current cocoa market conditions according to which, global supply of cocoa beans is anticipated to top world demand. This will result in price declines for cocoa beans and subsequently prices of cocoa butter, as prices of beans and butter are positively correlated.

Compared with the average price recorded during February 2020, prices for cocoa butter went down by 26% in Europe and by 27% in the United States during February 2021. Indeed, prices for cocoa butter dropped from US$7,014 to US$5,108 per tonne in the United States, while in Europe they plummeted from US$6,748 to US$5,020 per tonne. 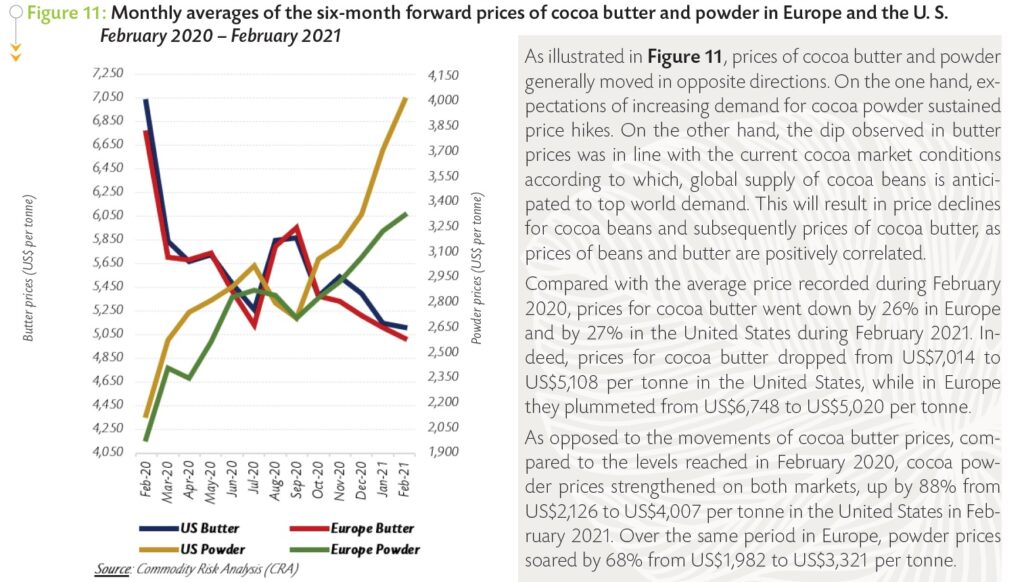 The first forecasts for the 2020/21 cocoa season published by the ICCO Secretariat in its latest issue of the Quarterly Bulletin of Cocoa Statistics suggests a production surplus of 102,000 tonnes. Increases in production and grindings are expected at 2.5% to 4.843 million tonnes and at 0.5% to 4.693 million tonnes, respectively.