Cocoa Market Report: London and New York both bearish and in backwardation in June

ABIDJAN, Côte d’Ivoire – This report on the movements of cocoa futures prices sheds some light on the July-2021 (JUL-21) and September-2021 (SEP-21) futures contracts as listed on ICE Futures Europe (London) and ICE Futures U.S. (New York). It aims to provide insights into the price developments for these two specific futures contracts.

Figure 1 shows price movements on the London and New York futures markets respectively at the London closing time in June 2021, while Figure 2 presents similar information for the previous year.

Both figures include the US dollar index to extricate the influence of the strength of the currency on prices. 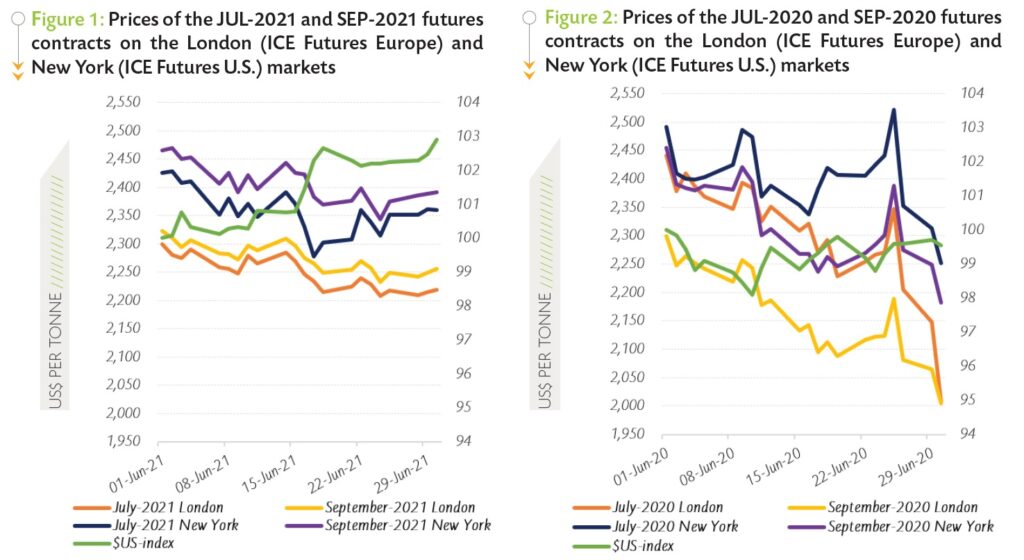 As seen in Figure 1, the contango situation which was observed in May 2021 continued throughout June 2021. This is directly related to the increase in the volumes of exchange-certified stocks on both sides of the Atlantic.

Contracts expiring at a later date are more expensive as a result of (i) storage and insurance costs; (ii) interest rates and (iii) the time value of the certification issued by the exchange.

Figure 2 shows that both the London and New York markets were bearish, and a backwardation was observed. On the one hand, the declining trend in cocoa prices a year ago was due to lower-than-expected grindings volumes in the midst the COVID-19 pandemic outbreak

Various fundamental factors contributed to the overall decline observed in prices of the JUL-21 contract during the month under investigation. Indeed, massive supplies of cocoa beans from Côte d’Ivoire and Ghana, amidst uncertainties on demand, were detrimental to prices.

In addition, the announcement of the postponement of the reopening of some economies in the Eurozone because of the propagation of new and deadly variants of the COVID-19 contributed to further pressure down futures prices. Furthermore, the weakening in cocoa prices was also triggered by the appreciation of the US dollar.

In particular, over 11-18 June 2021, the US dollar firmed by 3% and thereby played a predominant role in the plunge in prices observed during that time span

In the course of June 2021, stocks of cocoa beans with valid certificates in European warehouses averaged 124,368 tonnes; representing almost three-quarters of the total certified stocks. As illustrated in Figure 3, stocks with valid certificates increased by 15% as compared to their average level of 108,085 tonnes seen a year earlier. In the United States, total stocks climbed by 34% year-on-year to reach an average of 366,489 tonnes in June 2021 (Figure 4).

Over the same timeframe, certified stocks in the United States rose from 5,366 tonnes to 25,673 tonnes. This development is suggesting that the industry is now increasing the share of exchange-certified stocks so as to use them as collateral.

More cash will be needed to finance the higher working capital which is expected as a result of the ease of the COVID-19 pandemic restrictions. 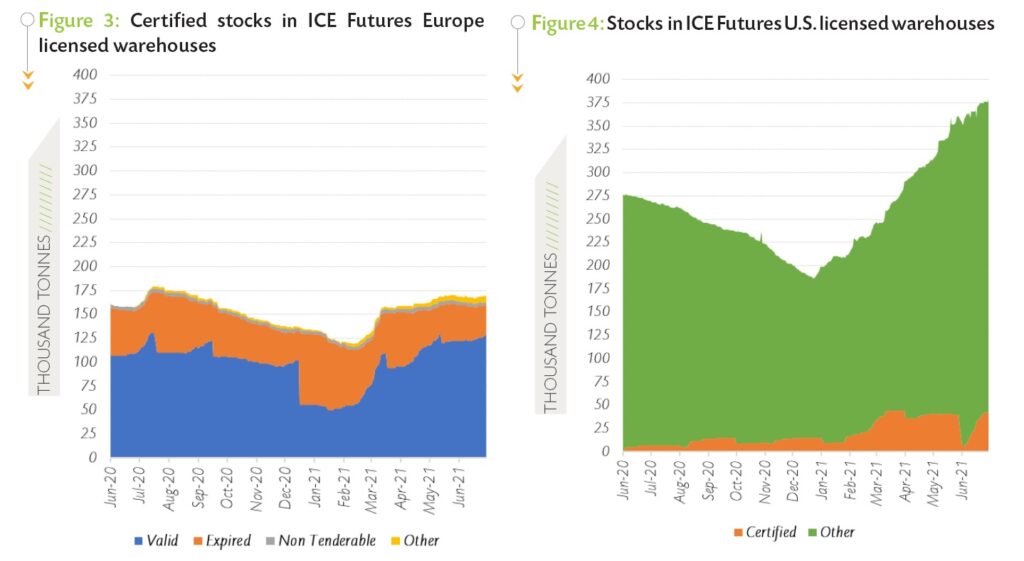 Over October 2020 – June 2021, cocoa graded by the ICE Futures Europe reached 119,380 tonnes, up by 14% from 104,270 tonnes of cocoa graded over the same period in the previous season. During the above-mentioned time spans, the volume of Cameroonian cocoa beans at exchange gradings decreased from 54,960 tonnes to 41,160 tonnes. 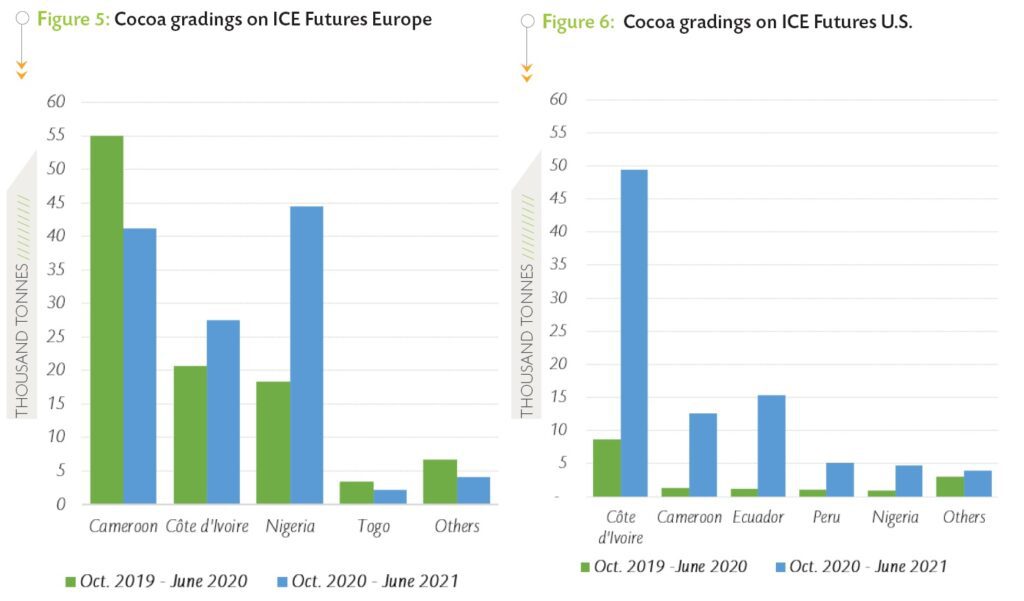 As presented in Figure 7 and Figure 8, origin differentials on prices of the six-month forward cocoa contract in Europe and the U.S. for Ghana, Côte d’Ivoire, Ecuador and Nigeria continued to decline in June as compared to their levels recorded at the beginning of the 2020/21 cocoa year.

The anticipated market surplus of over 150,000 tonnes because of the persisting weaker demand pressured down origins differentials. In Europe, the differential for Ghanaian cocoa was seen at US$358 per tonne in June 2021, 47% lower compared to US$672 per tonne recorded in October 2020. 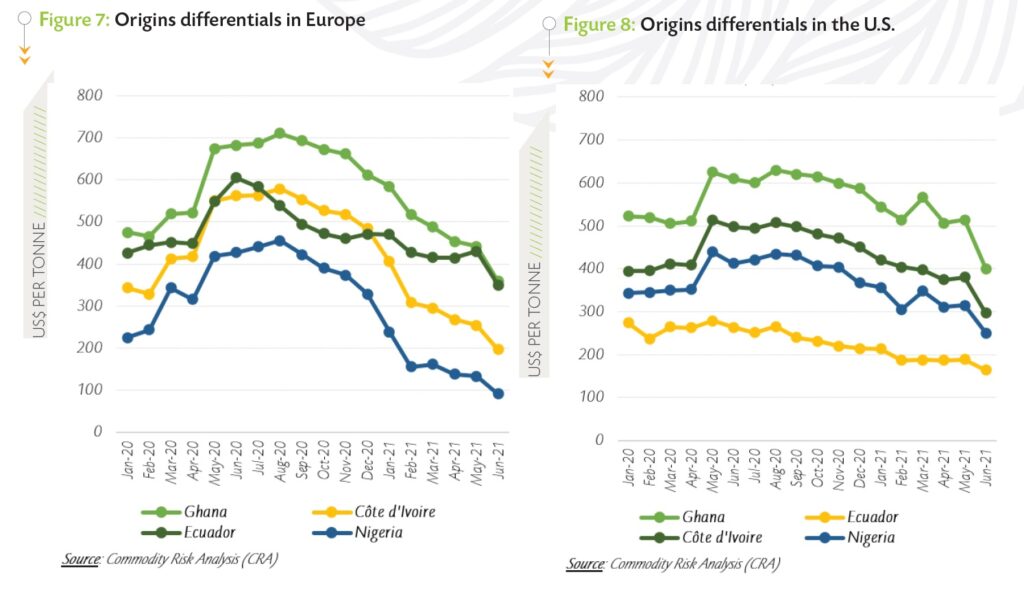 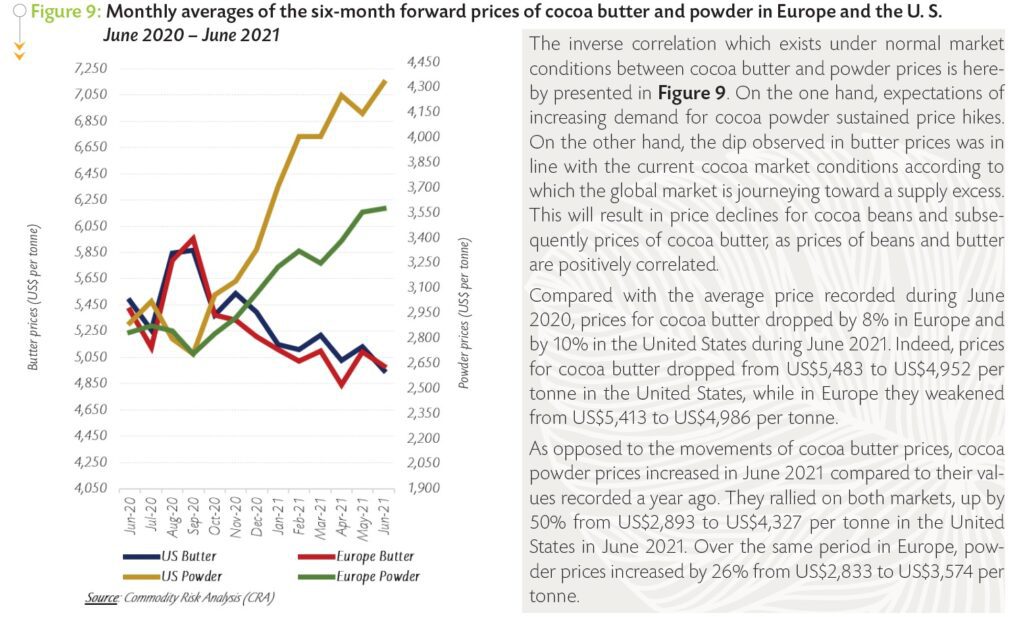 Turning to grindings, processors in Côte d’Ivoire were reported to have ground 402,000 tonnes of cocoa beans in June, down from 422,000 tonnes processed at the same period of the previous cocoa season.

In June 2021, the Conseil du Café-Cacao announced that Côte d’Ivoire was on track to reach its sales target for export contracts.