ABIDJAN, Côte d’Ivoire – This review of the movements of cocoa futures prices for January 2021 focuses on the March-2021 (MAR-21) and May-2021 (MAY-21) futures contracts as listed on ICE Futures Europe (London) and ICE Futures U.S. (New York). It aims to highlight expected key market developments and the effect of the exchange rate on the US-denominated prices of these two specific futures contracts.

Figure 1 shows price movements on the London and New York futures markets respectively at the London closing time in January 2021, while Figure 2 presents the same information during January 2020. 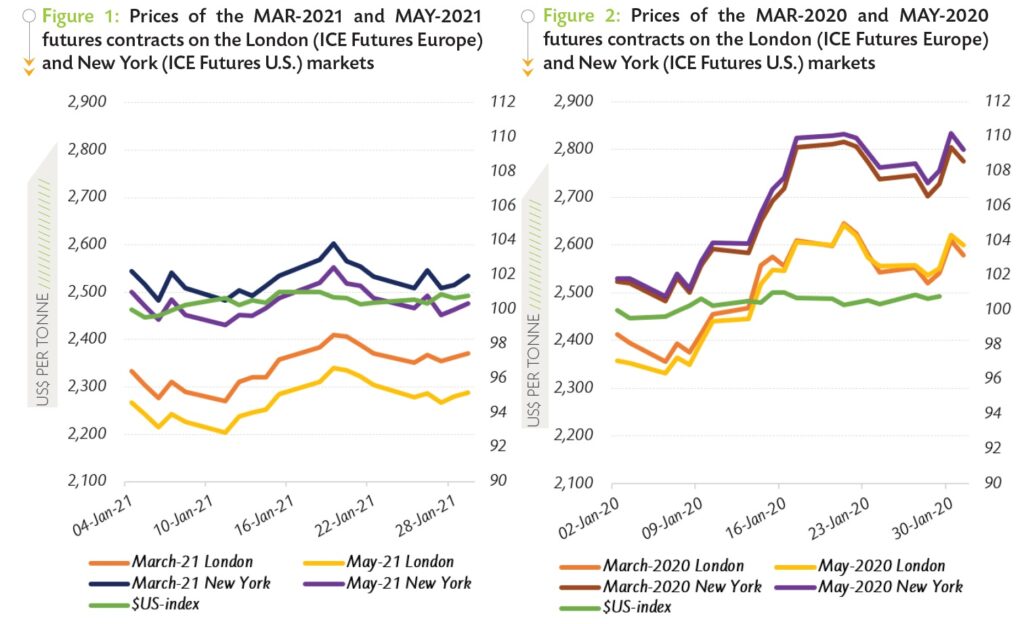 As shown in Figure 1, price configurations on both the London and New York markets indicate that the nearby contract (MAR-21) traded higher than the deferred one (MAY-21). Hence, both markets developed in backwardation with London offering an incentive of US$72 per tonne and New York a premium of US$49 per tonne.

The higher premium in London can be attributed to the low cocoa inventories registered at the time. Looking back to January 2020, the first and second positions of cocoa futures contracts were slightly in backwardation in London while a contango situation was observed in New York (Figure 2).

However, during January 2021, the nearby contract prices averaged US$2,343 per tonne, down by 7% compared with the average price of US$2,516 per tonne for the first position contract seen a year earlier in London. In New York, the nearby cocoa contract prices averaged US$2,528 per tonne in January 2021, 6% lower compared to US$2,675 per tonne recorded over the same period of the previous crop year. Anticipations of a production surplus compounded with low levels of demand have contributed to the decline in prices in January 2021.

Over the period 4-11 January 2021, prices of the first position cocoa futures contract went down on both sides of the Atlantic.

At the time, a mild Harmattan was reported in West Africa and unprecedented peaks of new COVID-19 cases were recorded in Europe and the United States. As a direct market reaction, prices tumbled to their lowest levels for January; settling at US$2,270 per tonne and US$2,483 per tonne in London and New York respectively. Moving on to 12-19 January, MAR-21 prices recovered from their previous plunge and firmed by 4% on both markets.

This bullish stance was an aftereffect of stronger-than-anticipated grindings in South-East Asia and North America for Q4.2020. In London, prices increased from US$2,310 to US$2,409 per tonne while in New York, they strengthened from US$2,504 to US$2,602 per tonne. However, this upward trend was stalled over 20-29 January 2021 as the European Cocoa Association (ECA) posted data showing lower-than-expected levels of grindings in Europe during the fourth quarter of 2020.

The price evolution during the month were not impacted by the weight of the US dollar as its index remained stable over the same period.

Thereby, stocks with valid certificates represented less than half of the total certified stocks in European warehouses. This situation contributed to high premiums on the prices of the MAR-21 contract over MAY-21.

Though the level of total stocks was generally higher compared to Europe, the share of certified stocks remained marginal (Figure 4), thus contributing to cocoa futures pricing higher in New York compared to London. 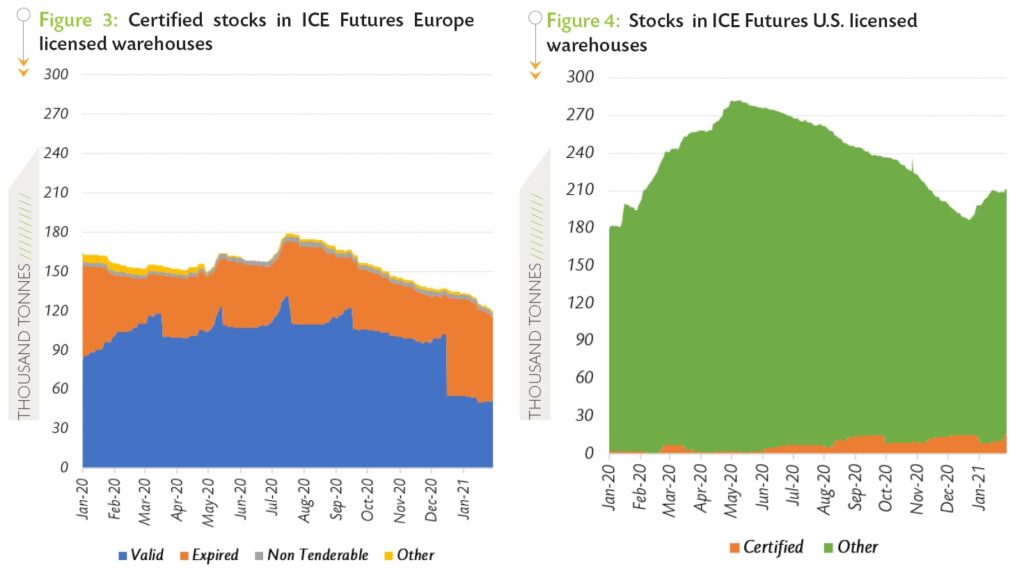 Figures 5 and 6 depict origin differentials in Europe and the U.S. on prices of the six-month forward cocoa contract for selected cocoa producing countries, namely Ghana, Côte d’Ivoire, Ecuador and Nigeria.

A clear observation is that the differentials for all listed countries have followed a descending trend on both the European and U.S markets since August 2020. With the introduction of the Living Income Differential (LID), cocoa bean users would require lower premiums to reduce manufacturing costs and consequently raise margins.

In Europe, the differential over Ghanaian cocoa stood at US$584 per tonne in January 2021, down by 13% compared to US$672 per tonne recorded in October 2020. Similarly, the origin differential declined by 23% from US$527 to US$406 per tonne for Ivorian cocoa beans.

A 39% drop from US$390 to US$238 per tonne was recorded for the Nigerian cocoa differential while Ecuador’s slightly decreased fromUS$472 to US$470 per tonne.

The U.S. market proposed a country differential of US$544 per tonne in January 2021 against US$614 per tonne during October 2020 for Ghanaian cocoa. Over the same period, the premium applied to Ivorian cocoa beans weakened by 13% from US$481 to US$420 per tonne. The premium received for Ecuadorian beans in the U.S. dropped by 8% from US$231 to US$214 per tonne while a 13% reduction to US$356 was applied to the origin differential for Nigeria.

It should be pointed that Ghanaian cocoa continues to attract the highest market premium in Europe and the United States; indicating the constant quality of the cocoa beans produced in the country. 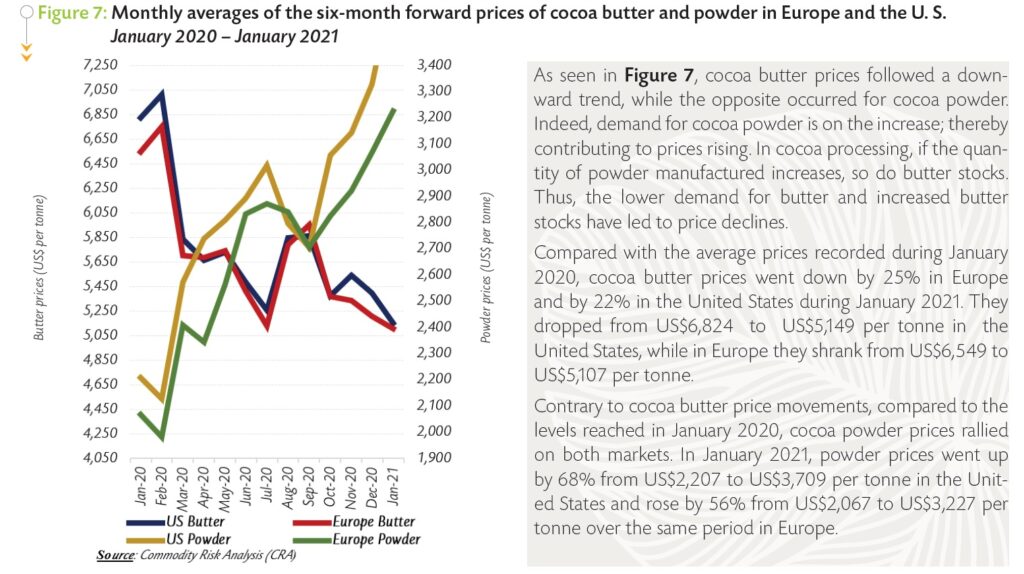 As seen in Figure 7, cocoa butter prices followed a downward trend, while the opposite occurred for cocoa powder. Indeed, demand for cocoa powder is on the increase; thereby contributing to prices rising. In cocoa processing, if the quantity of powder manufactured increases, so do butter stocks.

Thus, the lower demand for butter and increased butter stocks have led to price declines. Compared with the average prices recorded during January 2020, cocoa butter prices went down by 25% in Europe and by 22% in the United States during January 2021.

Moreover, exports of cocoa beans during the fourth quarter of 2020 were reported to have decreased by 10% year-on-year to 450,369 tonnes. Nevertheless, there are indications that part of harvest has been stored upcountry.

In Ghana, cumulative purchases of graded and sealed cocoa beans since the beginning of the 2020/21 crop year were established at 647,137 tonnes as at 15 February 2021; representing a 4.3% year-on-year increase compared to 620,578 tonnes seen at the corresponding period of the previous cocoa season. 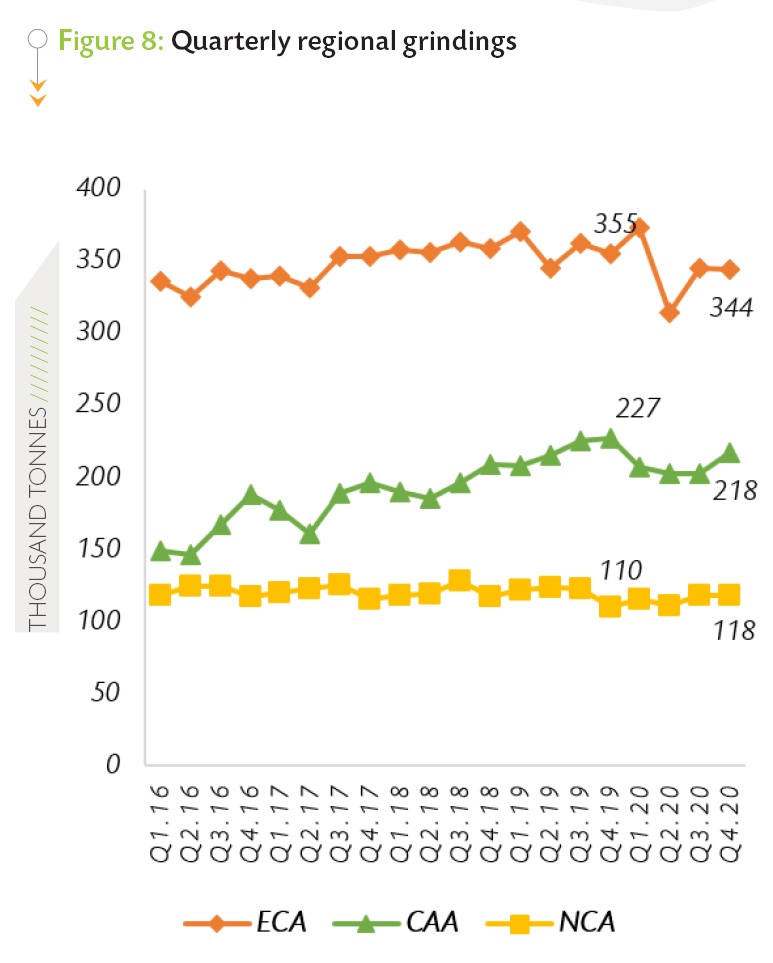 In the course of January, data for Q4.2020 published by the main regional cocoa associations indicated that grindings fell in Europe and South-East Asia, while an increase was recorded in North America. In turn, the exporters’ association in Côte d’Ivoire (GEPEX) released data showing year-on-year upward grindings in the country as at end January 2021.

Figure 8 shows that the European Cocoa Association (ECA) published data showing a year-on-year decrease of 3.1% to 344,151 tonnes in grindings while the Cocoa Association of Asia (CAA) announced a decline of 4.2% to 217,546 tonnes.

On the contrary, processing activities firmed in North America during the fourth quarter of 2020 with the National Confectioners’ Association (NCA) reporting a 6.95% increase to 118,043 tonnes of cocoa beans grinded. In Côte d’Ivoire, a year-on-year improvement of 4.2% to 199,000 tonnes was recorded in grindings at the end of January 2021.

Given the current market conditions, the 2020/21 cocoa season is expected to result in a production surplus.

Our preliminary estimate sets the global cocoa market surplus at about 100,000 tonnes. At the end of February, the ICCO Secretariat will release a detailed report of its first crop and grindings forecasts for the 2020/21 cocoa year in its Quarterly Bulletin of Cocoa Statistics (QBCS). 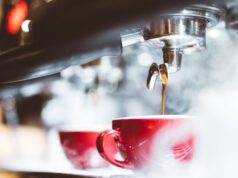