Cocoa Market Report: Futures prices fell in April both in London and in New York

Compared to the beginning of the 2020/21 cocoa year, prices of the front-month cocoa futures contract on the London and New York markets waned by 4% and 7% respectively as at end of April 2021. Exchange certified stocks increased by 22% in Europe while a 13% rise was recorded in certified stocks in the United States, due to April grading operations. Origin differentials started to fall again following their short-lived improvement observed during the preceding month. Cocoa production levels in Côte d’Ivoire and Ghana remained higher than in the previous cocoa year. Unlike in Europe, grindings data for the first quarter of 2021 showed a year-on-year increase in North America and Southeast Asia

ABIDJAN, Côte d’Ivoire – This section of the report sheds some light on the movements of cocoa futures prices in April 2021 by focusing on the May-2021 (MAY-21) and July-2021 (JULY-21) futures contracts as listed on ICE Futures Europe (London) and ICE Futures U.S. (New York). It aims to provide insights into the price developments for the two specific futures contracts.

Figure 1 shows price movements on the London and New York futures markets respectively at the London closing time in April 2021, while Figure 2 presents the equivalent information for the year prior. Both figures include the US dollar index to highlight the impact of this currency on the US$-denominated cocoa prices. 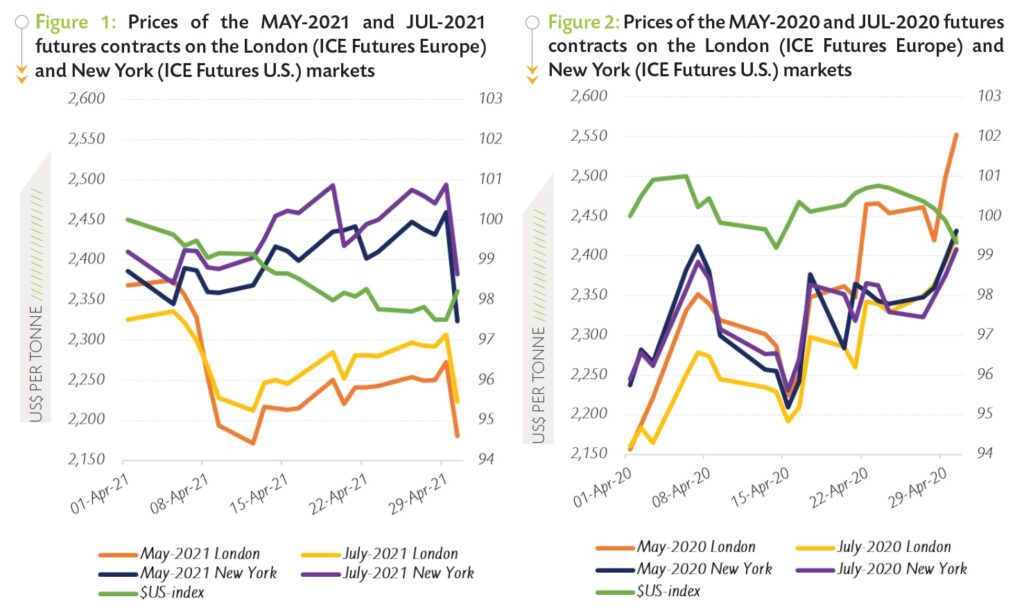 Although prices during the initial four trading sessions in London were in backwardation, during April, cocoa futures prices on both sides of the Atlantic mainly remained in contango, with the nearby contract pricing lower compared to the deferred one (Figure 1).

Looking at the price configuration in April 2020 (Figure 2), the two nearest cocoa futures contracts were mostly in backwardation in both London and New York.

In London, as depicted in Figure 1, between 1-12 April, prices of the front-month contract dropped by 8% to US$2,171 per tonne; corresponding to a 4-month low. At the time, market participants were anticipating weaker year-on-year grindings for the first quarter of 2021 in Europe. In addition, massive supplies of cocoa beans were reported in Côte d’Ivoire and Ghana. However, on the last trading day of the month under review, as market participants revised upward their forecasts for the crop size of Côte d’Ivoire for the current cocoa year, prices fell by 4% to US2,181 per tonne.

In New York, compared to the settlement value recorded on the first day of the month, futures prices increased by 3% from US$2,386 to US$2,459 per tonne on 29 April. This bullish stance on prices was driven by increasing grindings data posted for North America and Southeast Asia by the respective regional cocoa associations, namely the National Confectioners’ Association (NCA) and the Cocoa Association of Asia (CAA).

Concurrently, chocolate industry leaders reported an optimistic rebound in the demand for chocolate products, mainly in Asia. However, the gain in cocoa prices on the New York market wore off during the last day of the month in reaction to favourable meteorological conditions for the mid-crop in West Africa.

Data posted by the Exchange indicate that stocks of cocoa beans with valid certificates in European warehouses averaged 106,075 tonnes; representing approximately two-thirds (66%) of the total certified stocks in April 2021. As presented in Figure 3, stocks with valid certificates were up by 4% as compared to their average level of 101,801 tonnes seen in April 2020. In the United States, total stocks increased by 14% year-on-year to reach an average of 302,765 tonnes in April 2021 (Figure 4). 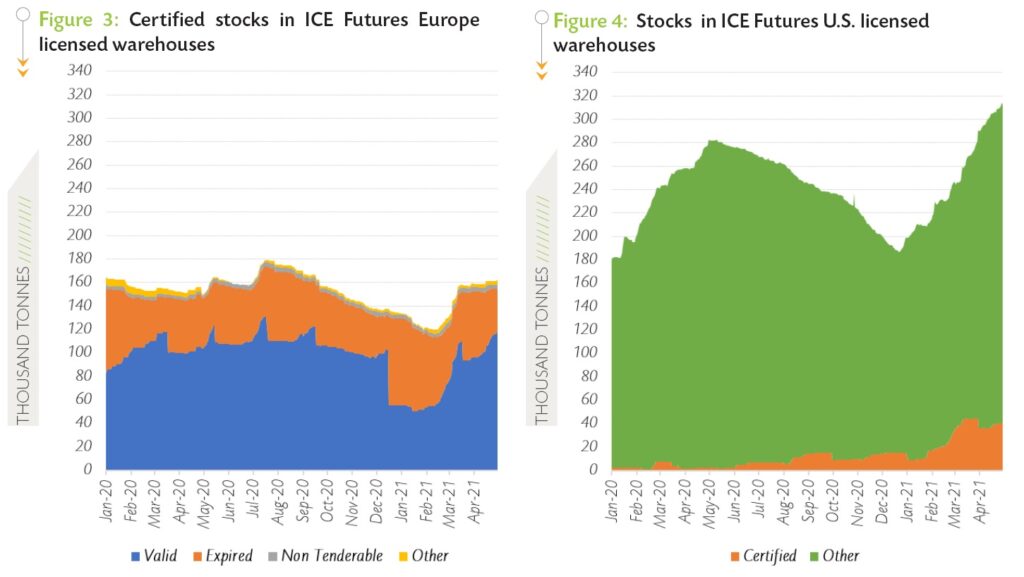 Cocoa graded by the ICE Futures Europe reached 95,840 tonnes over October 2020 – April 2021, up by 28% from 75,130 tonnes of cocoa graded over the same period of the previous season. Over the aforementioned time spans, the shares of Cameroonian cocoa beans at exchange gradings decreased from 70% to 38%. On the contrary, the share of Ivorian and Nigerian cocoa beans soared from 14% to 25% and 34% respectively.

The share of cocoa gradings from other origins went up from 2% to almost 3%. Over the first seven months of the 2020/21 cocoa year, the ICE Futures U.S. graded 53,359 tonnes of cocoa beans, up from 11,268 tonnes graded during the same period of the preceding year. 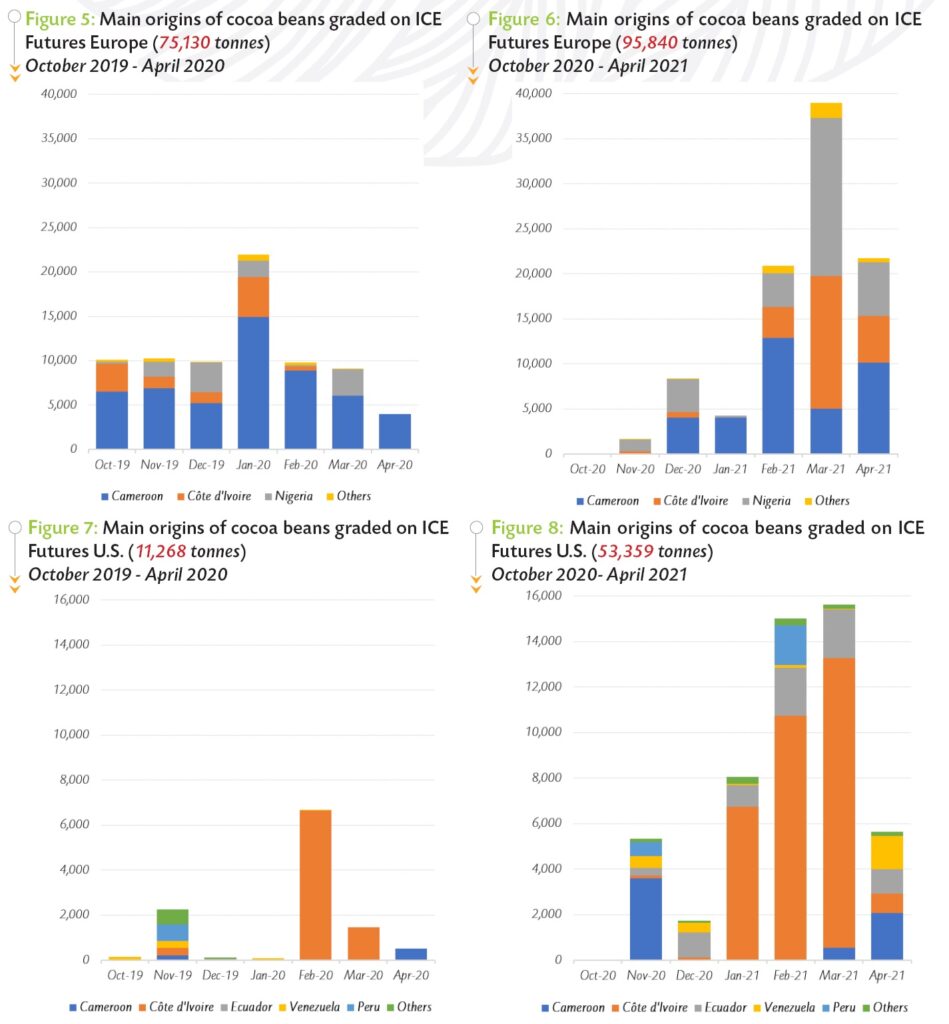 The current supply glut in the global cocoa market has progressively reduced the differential (which will be discussed in the next section) and therefore, the opportunity to hold Ivorian beans – notwithstanding the LID – and Cameroonian beans, which are a close substitute for the former origin.

As a result, owners of Cameroonian and Ivorian beans started to certify their stocks of cocoa beans according to exchange standards to be potentially used as collateral in trade financing and/or delivered against futures contracts.

Figure 9 and Figure 10 show the overall declining trends in origin differentials on prices of the six-month forward cocoa contract in Europe and the U.S. for Ghana, Côte d’Ivoire, Ecuador and Nigeria. 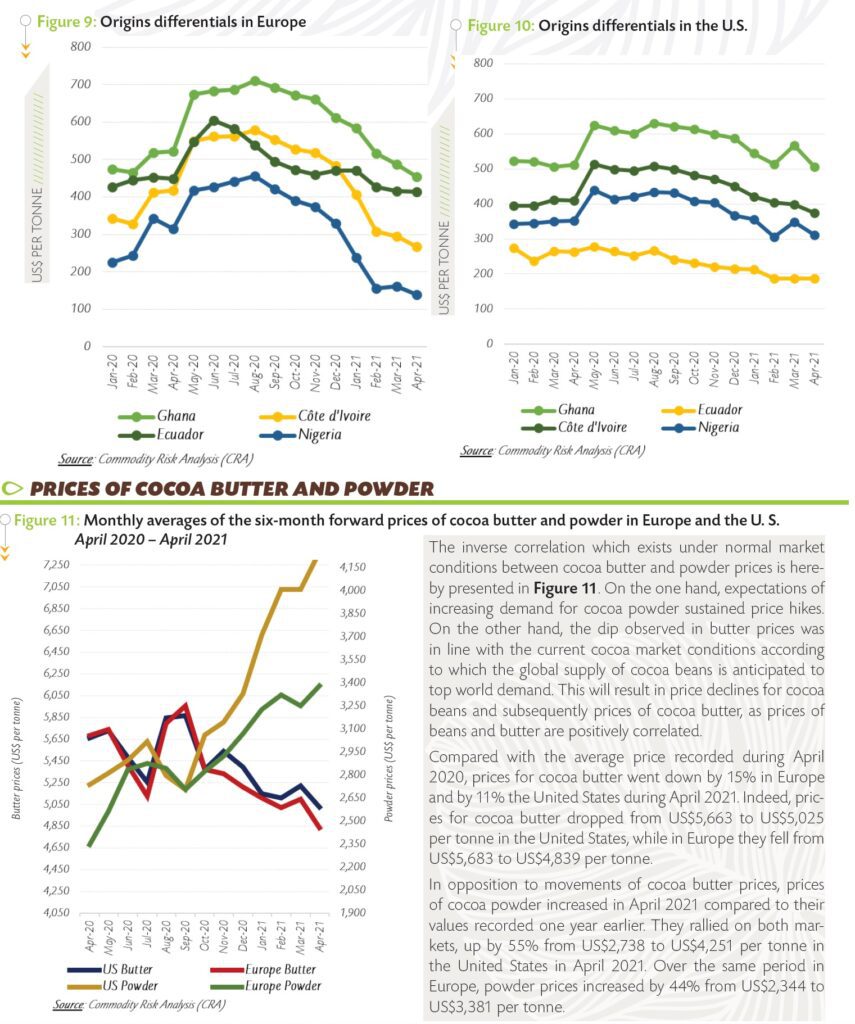 On the European market, the differential for Ghanaian cocoa were established at US$453 per tonne in April 2021, 33% lower compared to US$672 per tonne recorded in October 2020. Similarly, the origin differential shrank by 49% from US$527 to US$268 per tonne for Ivorian cocoa beans.

In Ghana, purchases of graded and sealed cocoa since October 2021 were reported at 849,266 tonnes by 29 April 2021; corresponding to a 19.6% increase year-on-year. In April, data for the first quarter of 2021 published by the main regional cocoa associations indicated that grindings fell in Europe while an increase was recorded in South-East Asia and North America.

Figure 12 shows that the European Cocoa Association (ECA) published data indicating a year-on-year decrease of 3% from 368,934 tonnes to 357,815 tonnes in grindings.

On the contrary, the Cocoa Association of Asia (CAA) announced a year-on-year increase of 3.14% from 207,356 tonnes to 213,858 tonnes. In the same vein, processing activities improved in North America during the first quarter of 2021, with the National Confectioners’ Association (NCA) reporting a 2.05% increase from 115,591 tonnes to 117,956 tonnes of cocoa beans ground. 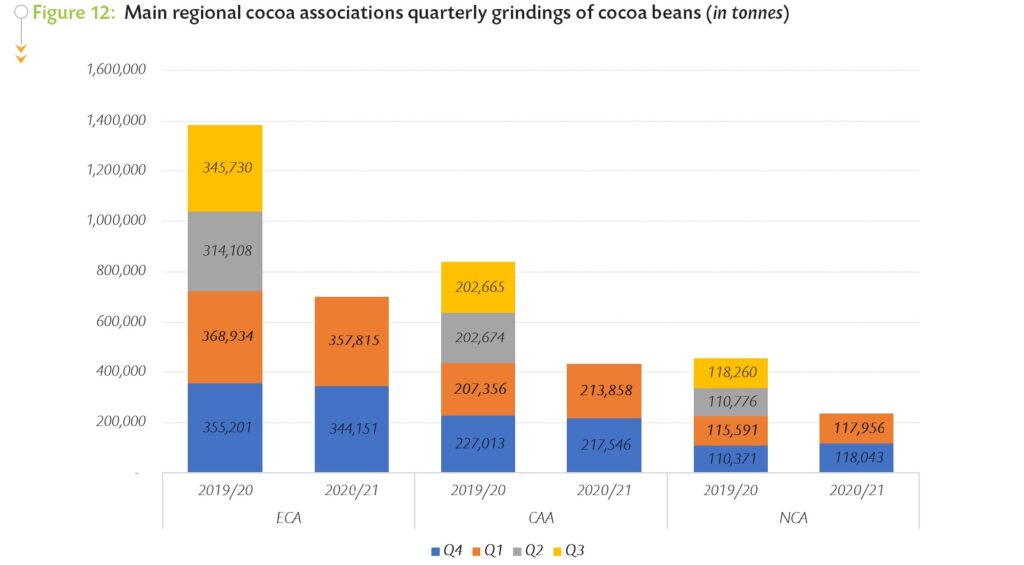